As some Kenyans are still reeling from the loss of their hard savings made unavailable by the collapse of the criminal entity that was Chase Bank, it would be prudent to review some of the criminals that were at the helm of this deplorable bank that masqueraded as an innovative outfit with exceptional customer service and beautiful lady employees to entice naive men to deposit their funds into this pyramid scheme of graft.

Everyone remembers the spectacular drama that played out in early April 2016 when Chase Group Chairman Zafrullah Khan and vulgar mouth CEO Duncan Kabui were forced out and social media led by cnyakundi.com urged customers to withdraw their funds and within one day 8 billion was pulled out from the faltering institution in a spectacular bank run that forced the decadent entity to close down for 2 weeks and go under receivership. Most assume that this was the only bank run that Chase faced.

Not known to many is that Chase Bank bank experienced a massive but silent bank run immediately after Imperial bank imploded in October 2015. Once Imperial Bank went under, smart depositors knowing Chase had similar shenanigans as Imperial Bank, rapidly but quietly pulled out over 30 billion of their funds by the end of 2015; an affair that was unbeknownst to the general public. Dumb money (like LSK depositing 800 million) still kept their money in the ‘glamorous’ institution unaware of the underlying maelstrom that was brewing only to be caught short in April 2016 and having their deposits frozen. Until today, high net worth depositors are yet to receive their full deposits.

In this article, we shall review the dubious personalities and histories of the criminal executives of Chase Bank and where they are stationed now. As you shall see, most of them had shady pasts in their careers having been sacked from prior employers only for Chase, realizing their criminal potential, to hire them to continue with their pilferage on behalf of the bank. The over-concentration of crooks at Chase Bank is appalling as you shall see.

Employees of Chase Bank well know the combative nature of vulgar mouth Kabui. DK as he was known, was a bully known to intimidate employees and had no qualms spewing vulgar insults like an American gangster. The vulgar mouth could threaten employees with a sack for trivial matters and had a particularly malicious manner of sacking staff.

In some cases, he would utter ‘I do not want to see that piece of shit in this premises’.Communicating via the thug Security Manager, Cleophas Kirwa Melly, the guards at the gate would be instructed by Kabui to block an employee from entering the premises. The poor employee shocked that he couldn’t enter the premises was told to wait at the gate and someone from inside would collect his personal belongings and bring them to the traumatized soul then he is sent away by the guards. In other cases, an employee already within the building would be ambushed by HR, taken to a room where he would be presented with a list of imaginary violations and then presented with a choice to either resign to obtain his pension dues plus future references or if he refuses they would outright sack the poor soul, deny him his dues and reiterate they would write a bad reference to any future employers. Most shocked employees, realizing that they needed the meagre dues plus reference would be presented with a foolscap and write the resignation letter under duress.HR would intimidate the employee not to dare sue as the bank had the financial and legal machinery to overwhelm him in court and have a ruling in the bank’s favour for which the employee would pay costs. For a junior staff earning 30,000 KES/month, the prospect of taking this corrupt institution via an equally decadent judiciary seemed an insurmountable undertaking hence would painfully bite the bullet, resign under duress and move on traumatized.

Formal legal HR disciplinary procedure decrees that an employer should present to an employee a show-cause letter stating the list of violations, give employee a few days to prepare his response, have a fair hearing at a disciplinary committee then employer would indicate his verdict and if its a dismissal the employee had a chance to a fair appeal process. Considering that Chase Bank flagrantly violated these rules, any employee sacked in the draconian manner indicated above would easily win in court but were intimidated not to pursue legal redress and considering the costly, corrupt and bureaucratic court processes, a junior employee with meagre means simply couldn’t take on the bank in court and would bitterly move on.

The irony is that the criminal Kabui was showered with accolades by githeri media and the filthy banking criminal elite. Foul mouth Kabui was awarded the best bank CEO in 2015 by Think Business Banking Awards just a year before his spectacular downfall. Vulgar mouth Kabui was also awarded the “Top 40 Under 40 Men” in 2011 by Nation’s Business Daily when the pampered, criminal fat boy was 39 years old. Moreover, another Chase bank crook by the name Magdalene Mulandi formerly Group Head of Brand at Chase Bank received “Top 40 Under 40 Women” award in 2015 for ‘promoting the iconic Chase Brand’ a brand that was eventually revealed to be a graft den of thieves. Its such bogus shenanigans of showering thieves with praises that give a bad name to githeri media.

Vulgar mouth now finds himself ousted in a most humiliating public manner and is befitting for a thug that sacked employees with extreme cruelty. As they say ‘what goes around comes around’.He now spends his time at court defending himself. 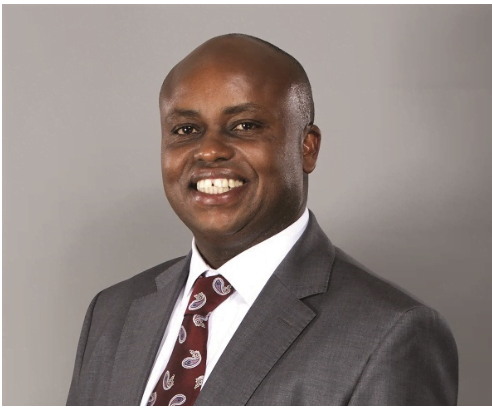 Days when vulgar mouth Kabui was pompous before his downfall 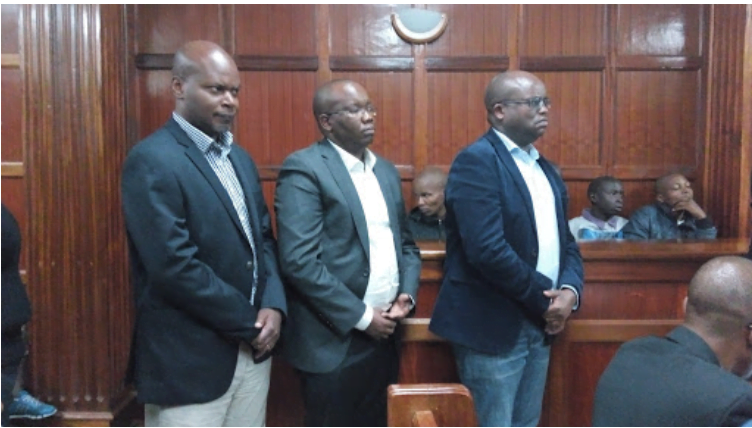 So what is vulgar mouth doing nowadays? Surprisingly, he is hiding at Rafiki Microfinance (which was once a Chase Group subsidiary) as a Director. Vulgar mouth plus the thug Zafrullah Khan who retains the Chairmanship of Rafiki and the thief Ken Obimbo (to be discussed later in this article) are quietly sitting on the board of Directors with CBKs full knowledge. 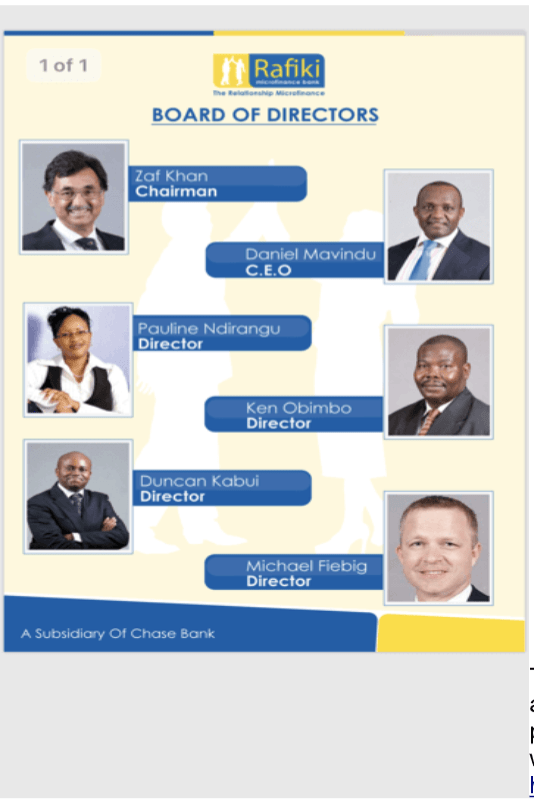 Kindly find below the internal document image from Rafiki Microfinance that shows the 3 individuals above serving as Chairman and Directors respectively.

They have tried keeping this dubious fact a secret not to be known by the general public. In fact, if one goes to the official website of Rafiki Microfinance https://rafikibank.co.ke/ one can see that the links for management and other links like our dream, mission, core values are inactive and do not produce any results when clicked. It may simply an attempt to hide the management structure from the general public.

Yet naive clients still deposit their money at Rafiki Microfinance. Let them not say they weren’t warned.

It is most unfortunate that one criminal goon Ken Obimbo “The Bimbo” serves as the Managing Director of the dubious Rafiki Microfinance once a subsidiary of the equally decadent Chase Bank.

Even more distressing is that Ken Obimbo (known as KO in Chase Bank and Rafiki)served as the Chief Financial Officer of Chase Group thus was in the heart of all the malfeasance of the criminal insider lending and fraudulent financial reporting scheme that was Chase Bank yet he is allowed to continue as MD of Rafiki Microfinance. 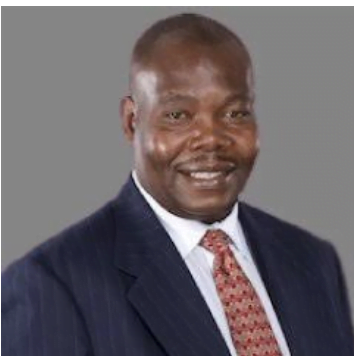 More alarming is that Obimbo the Bimbo was sacked from Coca-Cola then went to serve as MD of Kenya Bus Service that was run down by graft before joining Chase.

Why is CBK allowing such a filth plus Zafrullah Khan and vulgar mouth Kabui to continue operating in the banking sector? Why are naive Kenyans still putting their money at Rafiki Microfinance?

Now let us introduce the pervert Parmain Ole Narikae (known as Prof at Chase Group). Pervert Prof has a most disgusting career history. He once served as Head of Marketing at Co-operative Bank where he was sacked. He was a lecturer at USIU thus his nickname Prof.Later, he joined Chase as General Manager where part of his duties was to oversee HR recruitment. The hiring of beautiful female Chase employees was largely attributed to his perversions of staring at girls behinds and breasts. The ‘Pervert Prof of Assess and Boobs’ was routinely caught checking out girls wares. He then was promoted to Director of External and Regulatory Affairs where part of his dubious job was to cover up Chase Bank’s involvement in the NYS scandal. 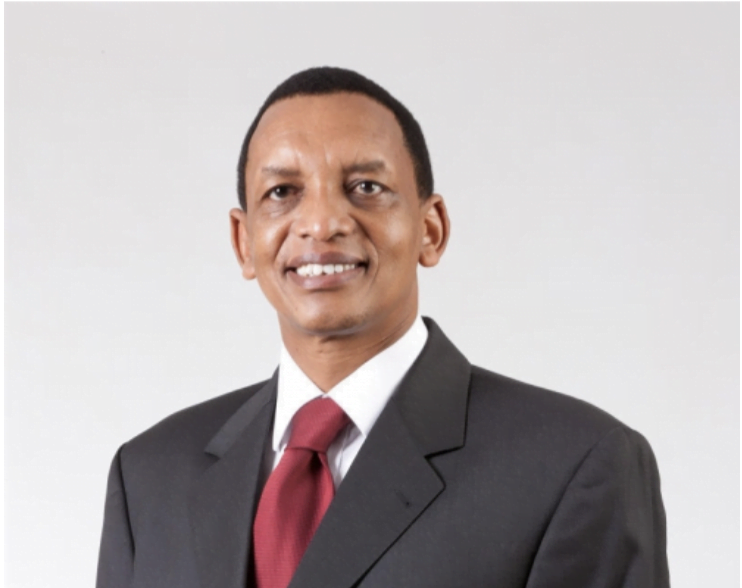 After Chase Bank imploded in April 2016, Pervert Prof manoeuvred himself to land a job as CEO in the government parastatal Kenya Industrial Estates (KIE) appointed by his buddy corrupt Industrialisation Secretary Adan Mohamed who once served as CEO of Barclays Bank. He doubles as a board member at the multibillion-shilling Unclaimed Financial Assets Authority. Talk of the fox guarding the henhouse.

As Head of HR and later Director Talent and Organization Development, this bitch Hellen was the idiot that effected the draconian resignation under duress orders from Kabui explained earlier. She was known to be utterly insensitive to employees distress especially during their dismissal.

Little did she know that she would also be sacked from Chase Bank in 2016 when they went bust and now works in a boutique consulting company. 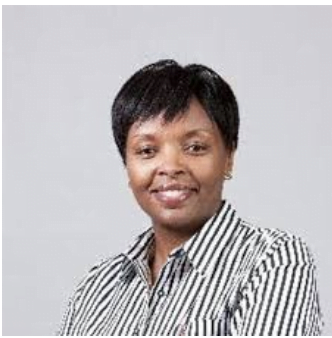 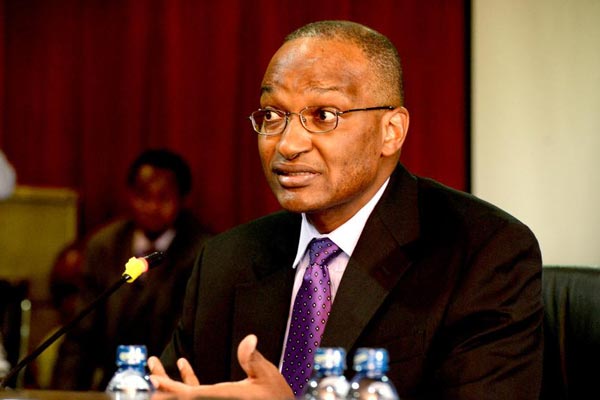 It is most shameful that most of these deplorable thieves continue serving in banking despite their past histories of graft. One wonders what Opus Dei at CBK isn’t blacklisting them from continuing in the banking sector or is he busy applying makeup while crooks get recycled in banking?