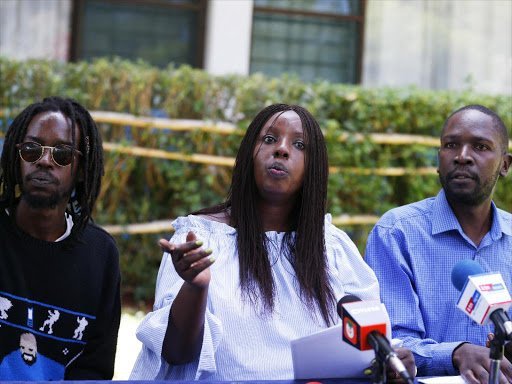 William Wamalwa, Alice Muthoni and William Wamalwa Snr in Nairobi. In January they dismissed claims by siblings Derek and Michelle (Chichi) about administration of the Wamalwa estate

Wamalwa Senior, named after his grandfather, was also suspected of abusing drugs and was depressed.

According to witnesses, Eugene’s nephew was seen taking cheap liquor from a local pub, the close friend saw him in bad shape and accompanied him to their Milimani Home, and stayed close to him throughout the night.

His situation worsened and the very friend took him to Some Local Hospital by name Crystal, owned by a Dr Osagi / Osaki where his Body rests.

‘It is so depressing to have lost him in such a manner’, said a close ally of the family

Since the death of the former Vice President Michael Kijana Wamalwa, the family has had numerous tussles about the sharing of his wealth. It’s been a 15 year protracted battle.

The matter was not made easier by the death of his younger Wife Yvonne Nambia, former Deputy High Commissioner to Australia.

Yvonne’s kids, Michelle and Derek Mboya have accused Devolution CS Eugene Wamalwa of siding with the other siblings to disinherit them and at the time she (Yvonne) died, there was a case in court stopping her from using the monies that her husband left.

The same accusations have been levelled against the two Yvonne kids by the others. Alice Muthoni, Jabali Wamalwa, William Wamalwa Senior and William Wamalwa Junior in January 2019 claimed that Derek and Michelle are only battling for a larger share of the late Wamalwa’s estate.

“It is a question of fairness whether one of the beneficiaries can get three quarters of the estate to the disadvantage of the four who are left to share one quarter of the property,” said Alice, who also claims to be the sole executor of the Wamalwa estate.

The VP married Yvonne in 2002 and bore a daughter with her named Michelle. Alice accused the other child Derek of being a stranger therefore not having any power to talk about family matters.

Alice said in January, “We were surprised to see through the media yesterday, a statement by Mr. Derek Mboya touching on matters relating to our late father’s estate to which he is a stranger as he is neither a beneficiary nor an authorized person to speak on our behalf”.

Derek replied stating that he is competing with very powerful and influential people and that’s why the matter is in court.

“The people who are fighting against us are extremely influential and respected, they are on TV every day with the President or the Deputy President”

The family tussle has had some adverse effects like both sides of the divide living in poverty-like conditions.

Their father was also said to have been very generous with his wealth.