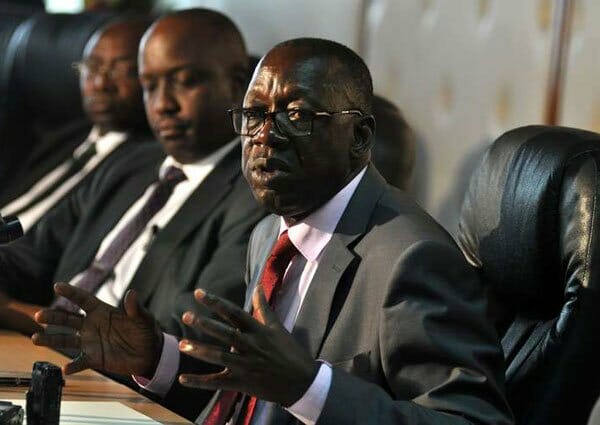 Caption. Former Devolution PS Peter Mangiti. Parliament has been said to be a large beneficiaries of his bribes.

When he recently appeared before a  parliamentary committee for grilling, Peter Mangiti was powerful enough to precipitate a “Kamukunji” as the MPigs went to haggle over how much they should demand from the deposed former PS Devolution.

The Devolution and Planning Ministry’s cartel that sank former CS Waiguru is back with Vengeance at the Newly formed Ministry of Public Service Youth and Gender Affairs, at the center of cat fights about to boggle down the Ministry is 25 Billion NYS budget and 15 Billion world bank funded project to be managed at the directorate of Youth affairs, Interested consultants are already fighting to position themselves and paying homage to the Director, this has stoked fears of the Project going the Kazi Kwa vijana way.

The Principal Secretary for Public Service and Youth has literally inherited the cartel, so close knit it is that the Person who leads it is unimaginable athletic lady who has gained favor of the PS, Caroline Okello, she has served three PS’s of Youth boasting of chunky experience. She is the adopted PA to the PS on recommendation by Mangiti, rude to hoot and a cantankerous gate keeper who every officer is complaining of, she backbites every officer and orients every PS to her way,she is so powerful that she controls state corporations CEO’s and Chairpersons in PS’s Name, the PS’s front office has been complaining of the tacit instruction from Ms. Okello that nothing goes to PS’s office without her input including appointments for meetings.

The head of Ministerial Tender committee at devolution, Hassan Noor Hassan who is also the Director of Administration and adversely mentioned in the NYS scam as chief architect, had also settled with his team at Ken-com house 3rd floor together with Samuel Odhiambo the ministries procurement officer and secretary to Noor chaired committee, they have however recently lost favour with new PS and are said to be on their way out.

Lilian Omollo not quite aware,unlucky and without time, has been recently buying peep talks from the cartel, she has been serving the cartel diligently for the last two months with payments to companies related to his predecessors having been made a priority.

During Lilian’s stint at Nepad, unknown to many she was very close to former PS Peter Mangiti, she did not see eye to eye with former CS Anne Waiguru who she had serious running’s with, occasionally reprimanded her for laziness, she has been accused of holding brief for Mangiti, which wasn’t the case initially, who is is said to be quite comfortable with his replacement at the Ministry, they call each other “Mashemeji”, so much that she took advice to make Nixon Oborah a homeboy of ex Ps Mangiti as The Chief Finance officer for the new Ministry of Public Service Youth and Gender affairs.

Oborah is an ordinary Junior Finance Officer with a low job group whose rise elicited emotions of his seniors overlooked by Mangiti who are from Mt Kenya with higher job groups and experience, an irregularity causing storm and is stalling service delivery, they are accused of messing progressive bureaucracy. The fights are so vicious that Oborah commands zero respect within treasury, a man who rumours has it is using his position to chase small private social issues.

The newest recruit to the Cartel’s inner circle is the Assistant Director of Youth affairs Simon Mwangi Mbugua, an officer by training and practice, he is the person likely to run world bank funded project on youth worth 15Billion where the most tussle is, Mwangi is ruthless to an extent he has recently gained favour and is earmarked to be deputy director at the Youth directorate, he has deep influence at the treasury and planning departments and is said to easily and manipulatively control his CS’s and PS’s through his technical work and network. It’s said for him to gain edge he uses Senior economists to intimidate his bosses, a recent run is a letter that found its way to the PS’ s desk that shocked her, he himself together with director Mr Kamande generated it at the hight of disagreements over the World bank Projects,  Its said the PS has caved in to allow consultants to run the show despite having competent Youth officers who have very little work at the Headquarters.

Our mole intimated to us he has made his money through an elaborate network of Consultants and private sector honchos with interest in Government affairs he controls.

Currently Mwangi is deeply engrossed in a fight for control of World bank project currently headed by Alice Githu a senior Youth Officer who friends say had given up 3 months ago. She is said to have also received threats from quarters unknown to her. Recently Mwangi not making headway on the world bank Intern ship project, has started canvassing to be made Acting Director for International Conference on Great Lakes Region Youth Secretariat.

Several entities earmarked to be roped in by the Cartel is Youth Fund Chairperson who is perceived to be close to statehouse and National Youth council leadership albeit cautiously.

Of concern is how not thoughtful CS Public Service Youth and Gender Affairs is making decisions from flimsy advices laced with Interests without looking at the political impact, this would greatly expose her bosses, Sicily is so oblivious to how things are bad below her, officers quip that the moment they allowed Mangiti people, their goose was as good as cooked and her fall might be bigger than her predecessor in even the shortest time.