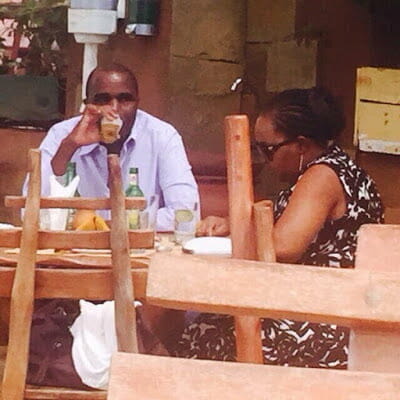 Photo Caption :  Waiguru and Waiganjo meeting before the CIC application to stop her impeachment. This photo was leaked online by Kenyan Bloggers

When Uhuru Kenyatta and William Ruto held a live TV broadcast naming the first cabinet breaking away from the past traditions, this time, they read out their CV and even disclosed their marital status.
It was the mention of Ann Waiguru as the CS of Devolution and Planning that left many wondering when Uhuru only said she is a mother of three sons but failed to disclose whether she was married or not.
What surprised many Kenyans is the fact that even during the vetting process by the parliamentary committee on appointments, not even a single MP raised queries over her marital status.
This week, we reveal that Waiguru was once married but the marriage could not last long and finally resulted in a divorce.
Her marital status has been talk of the town of late and investigations  now reveal that she was once married to Tony Waiguru Njuguna and they were blessed with three sons. He is the face behind Waiguru Njuguna Advocates.
We have also gathered that the two ended breaking up years later for a number of reasons. Sources say the two were having serious personal differences which could not allow the marriage to continue. She was accused of infidelity by her humble husband now running a church in Kiambu county. By then, she is said to have been in love with former permanent secretary foreign affairs in Mwai Kibaki’s government Thuita Mwangi. Mwangi would organise foreign trips for her for their own good time abroad.
Her husband complained she could not notify him whether she would be away or not only to learn she was out of the country. To complicate matters were allegations that she would arrive home late but dead drunk. The marriage had hit the rocks to an extent that the two were staying in separate rooms. It is said the husband demanded for a divorce. To avoid court battles over who to be in charge of the children, he agreed the mother to be given but have access and provide the necessities. The divorce did not go through the legal court process but through the traditional Kikuyu traditions. The two did not hold a church wedding but were married through the Kikuyu customs.
Since leaving office over corruption allegations, Waiguru is said to have spent most of her time indoors moving from her executive bedroom to the luxurious living room and in most cases in the company of a few friends and her children. She is currently said to be dating lawyer Kamotho Waiganjo.