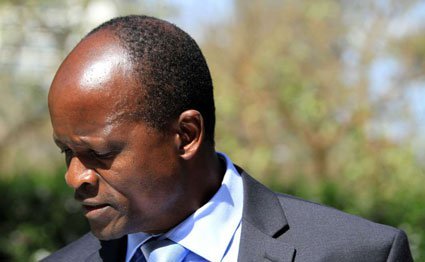 The county chief has already been charged alongside two aides with the murder of his lover Sharon Otieno, 26, who was seven months’ pregnant with his son. He pleaded not guilty.

Obado was first arrested on September 21 in connection with Sharon’s gruesome killing on September 3. He spent nearly one month behind bars during which he nearly lost his seat as governor.

He was rescued by the High Court after he was released on Sh5 million cash bail, pending the start of his trial next year.

The murder charge that deepened the rift between the Obado and his ODM party is giving him sleepless nights.

To begin with, he cannot set foot into his palatial home in Rapogi, which the EACC estimates cost Sh100 million.

Under tough bail terms, the governor also should not move 20km to the Homa Bay boundary, though his Rapogi home is much closer to Homa Bay, Sharon’s home county.

Then there is the Sh2.5 billion that the Ethics and Anti-Corruption Commission claims the governor and his proxies have syphoned from county coffers.

The EACC began the probe last year and froze several accounts, including that of Obado’swife Hellen Adhiambo Odie.

It named Peter Odoyo Oluoch Kwaga, a close Obado associate, as the architect of the theft who roped in six family members, including his wife and mother.

The anti-graft agency has filed a recovery suit, seeking to have the suspects forced to refund Sh1,971,179,180 obtained from Migori county and forfeit 65 properties already frozen by the government.

The properties include four maisonettes, two apartments and land parcels, together valued at more than Sh382 million.

In an intriguing court drama, the EACC says Obado was a beneficiary of fictitious contracts through which millions were wired to his three children, mostly abroad.

On Tuesday, the EACC simultaneously raided Obado’s Nairobi and Rapogi homes, as well as the county headquarters.

The investigators reportedly carted away many documents they believe could firm up their case against the governor.

This latest anti-corruption raid presented Obado with a third problem, eight guns recovered from his homes. Some are said to be unlicensed

On Wednesday, the county boss was dramatically arrested. He was arraigned yesterday.

Police wanted to detain Obado for 15 more days to investigate the firearms.

The defence team led by Cliff Ombeta argued that the governor has cooperated with security agencies, hence, should be granted bail.

“The guns were transported to Nairobi. We saw them at DCI headquarters. We wonder what the officers will be looking at, yet there was no shooting at either of the homes,” Ombeta said.