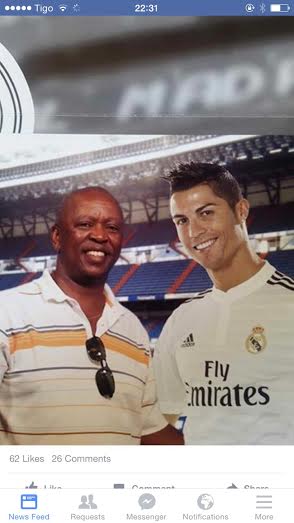 Photo Caption: Sam Mwai, General Manager of Karen Golf and Country Club. He has recently started portraying himself as a football expert with such photo-shopped images, in a bid to win a football tender.
In our continuing revelations on the proposed Magic Cup Tournament, we focus on the individuals behind Pewin Supplies Group and Icon Sports Marketing Limited.
Although the public face of Icon Sports is Grace Kiraguri, Sam Mwai, a former CEO of Sports Stadia Management Board (SSMB) is said to be the owner. As the General Manager of the Karen Golf and Country Club, he has managed to use his influence, to award Icon Sports the jobs of PR and arranging golf tournaments in the prestigious club.
Before joining Karen Club, Mwai served a short stint working as the CEO of Mathare United Football Club, and is closely-linked with its owner Bob Munro, renowned for the famous Mathare Youth Sports Association (MYSA). They are said to be best friends, with Munro acting as Mwai’s advisor as regards football matters.
Pewin Supplies Limited is the partner company of Pewin Motors, which recently unveiled an ultra-modern Chevrolet showroom, at a function graced by Tourism Cabinet Secretary Grace Kandie. It is owned by Peter Kirugua, who also doubles up as the Chairman of the Kenya Forest Service (KFS).
In March of this year, Sam Mwai was able to convince Peter Kirigua to sponsor the Kenya Open Golf Tournament, which was taking place at the Karen Golf and Country Club. Under the banner of Pewin Motors, Kirigua donated Kshs. 2 million to the tournament, with his principal partners General Motors donating a car to be won if any of the participants hit a hole-in-one.

Due to the close links between him and his former employer, Sam Mwai cannot be openly seen as influencing his former colleagues, as he maintains close links with them, moreso with Gabriel Komora, his longtime ally and protégé.
Kenneth Mathiu who we recently profiled as the local face for OpenSide Sports, the fraud UK based sports company that claims to organize matches, hails from the same village as Peter Kirigua.
The three have formed a partnership that has been pursuing a tender by Sports Kenya, to arrange international matches. Despite none of them having the ability or background in the activity, sources at Sports Kenya say that a decision has been reached, and money has already exchanged hands.
In our continuing expose on corruption at Sports Kenya, we ask, why are vehicle dealers and golf managers eyeing a football contract?
.
Would you like to get published on this Popular Blog? You can now email Cyprian Nyakundi any breaking news, Exposes, story ideas, human interest articles or interesting videos on: [email protected] Videos and pictures can be sent to +254 710 280 973 on WhatsApp, Signal and Telegram.