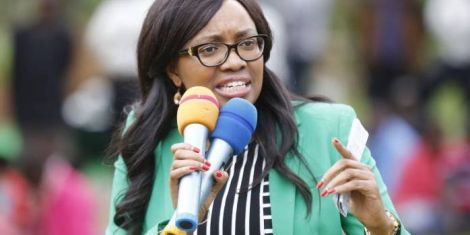 Chaos ensued on Saturday as Nakuru Senator Susan Kihika and a few of her Tanga Tanga counterparts, including Bahati MP Kimani Ngunjiri, after their planned meeting was disrupted by policemen who were deployed to the event.

Through her official pages, Kihika who was on the campaign trail for the United Democratic Alliance (UDA) candidate Nzuki Wachira for the London MCA seat revealed that the officers sealed off the venue before the meeting could begin.

The venue of my meeting in London Ward has been sealed off. It is gazetted campaign period? I thought kutafuta kura ni kutongoza sio force na fujo. Anyway we shall overcome.

Moments later, the legislators and their supporters engaged in running battles with the police as the politicians took to their heels and scampered for safety after teargas canisters were unleashed.

This comes just a day after an event on Friday where Kihika, who has been leading the UDA team holding campaigns in London Ward, urged the Kalenjin community in the area to firmly stand behind their candidate, stating that a victory for Nzuki would be a win for Deputy President William Ruto.