The unconstitutional composition of the IEBC is at the centre of a brewing battle between two factions of Jubilee Party as they position themselves ‘to win’ 2022 polls.

On Thursday, MPs passed the IEBC (Amendment)(No.3) Bill 2019, which gives the Parliamentary Service Commission (PSC) power to fill four slots out of  seven in a panel that will appoint commissioners to the Independent Electoral and Boundaries Commission.

Allies of President Uhuru Kenyatta and his Handshake partner, Raila Odinga, are controlling the Parliament are using their numbers to influence the selection process.

Mps allied to the Deputy President William Ruto have warned against schemes by Kieleweke wing of Jubilee to rig 2022 polls.

But Kieleweke Pressman Wambugu Ngunjiri has dismissed such claims arguing that the Bill was the brainchild of Baringo North MP, William Cheptumo who is a Ruto ally.

Cheptumo was the chair of the Justice and Legal Affairs Committee but was kicked out by President Kenyatta during a purge that stripped DP allies of party leadership and house committees.

Soy MP Caleb Kositany on Saturday said Tangatanga is aware of plans by Kieleweke to control the IEBC with hopes of using it to steal 2022 elections.

“We have confidence in the people and their votes. We will not seek any favours with the commission, we will talk to the voters, they are the ones who will decide the winner,” Kositany said.

The Bill is now awaiting a presidential assent before the selection panel can name four commissioners to replace those who resigned after the contested 2017 elections.

The four new commissioners will work with three others currently in office to oversee the 2022 elections and may be a referendum under the Building Bridges Initiative (BBI).

Tangatanga politicians have said that their interest was on the players and not the referee. 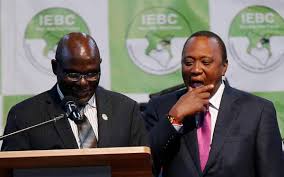 They say that they are not worried at all as they were covering the country slowly and empowering voters with wheelbarrows, motorbikes and sewing machines among others.

“When we are moving around the country, they are planning and scheming. When we win the election, they will start crying foul, their script is known,” MP Gachagua said.

Hon Rigathi Gachagua of Mathira is a Ruto die hard.

The process of appointing electoral commissioners has always been rocked with controversies.

After losing the 2013 polls Raila championed demands to kick out the former commission led by Issak Hassan.

He accused the commission of favouring the incumbent and that it could not be trusted to deliver a free and fair elections.

The commission was overhauled and a new one put in place led by Wafula Chebukati.

Raila again accused the Chebukati led commission of the same after the mishandling of 2017 polls where he lost but since joining government, the ODM leader went mute on IEBC.

The three resigned from the IEBC after the controversial 2017 polls.