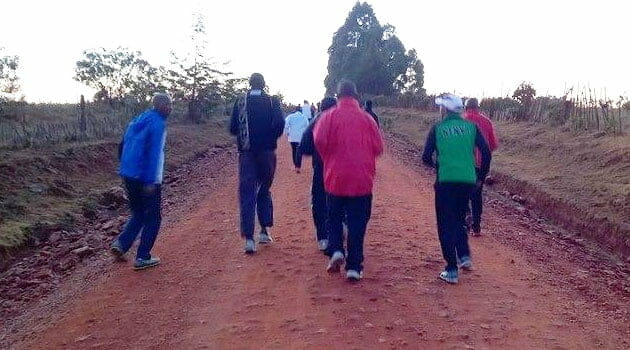 First Lady Margaret Kenyatta Sunday morning kicked off her training sessions in the North Rift ahead of the second edition of her Half Marathon scheduled for March 8 in Nairobi.

The inaugural training session in the high altitude parts of the North Rift was held in the Kaptagat Forest area where the resilient First Lady ran for 15 km in a time of one and half hours to boost her stamina as she prepares for the grueling forthcoming 21 km Half Marathon next month.

Besides Kaptagat, the First Lady is expected to continue the training sessions in other areas of the North Rift including Iten.

During last year’s training sessions ahead of the inaugural First Lady’s Half Marathon in March , she trained in the same region with elite marathon world beaters including Wilson Kipsang , Lorna Kiplagat and Florence Kiplagat among others.

The forthcoming Half Marathon, like the previous two marathons she participated in, both in Nairobi and London last year, are aimed at creating awareness and mobilizing resources for the Beyond Zero campaign. The First Lady successfully completed the two Marathons.

The Beyond Zero initiative aims to reduce maternal and child mortality in Kenya which remains unacceptably high. The country loses more than 108,000 children annually before they celebrate their fifth birthdays while over 5,500 women loose their lives while giving birth.

The campaign is driven by the principle that “no woman should die while giving life” which the First Lady has used as a mantra to mobilize awareness and resources globally.

Through the ongoing initiatives including the forthcoming First Lady’s Half Marathon, the First Lady hopes to raise an estimated Sh600million to purchase 27 more mobile clinics for the remaining counties.