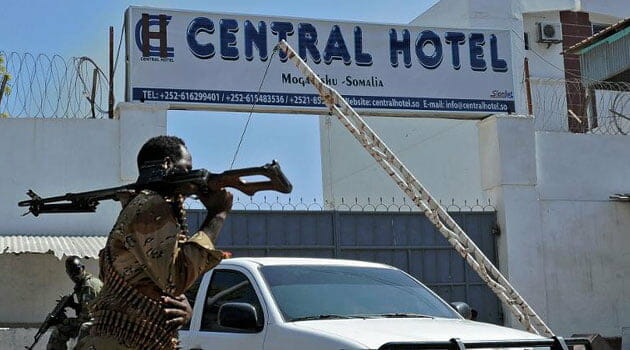 A navy flak jacket over his sky-blue shirt, Neil Wigan peered through the bulletproof glass window at six uneven wooden poles in front of a sand dune.

“There are more of them now,” the British ambassador to Somalia said, driving past the execution posts that convicts are tied to before being shot by firing squad. “It isn’t a particularly reassuring sign of progress.”

Violence is routine in Somalia, whether perpetrated by suicide bombers, jihadists, assassins, soldiers or the judiciary. Chronic insecurity makes the country a study in diplomacy at its most difficult.

Wigan, 44, is Britain’s first resident ambassador to the Horn of Africa country since it collapsed in a hail of gun and rocket fire in 1991. A new embassy opened in April 2013 “inside the wire” of Mogadishu airport’s relatively secure compound.

Diplomacy succeeds or fails on the strength of relationships, so on a recent Wednesday morning Wigan drove into Mogadishu in his convoy of B6-level armoured SUVs accompanied by ex-British military bodyguards wearing earpieces and carrying M4 carbines and pistols.

“There’s a real threat from Shabaab,” said Wigan, referring to the Al-Qaeda-aligned militants who launch regular attacks on the Somali government and its foreign backers. “We’re constantly deciding whether a particular meeting is worth the risk.”

“Security is as good as we can make it while still doing our jobs,” he said.