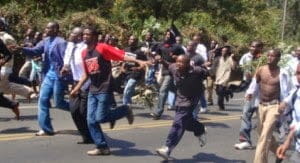 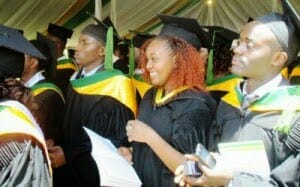 There have been around 200,000 readers on this post in 3 hours. Ministry of Education, Kenyans are speaking and it is time to listen.

An Open Letter to all Kenyans

Dear men and women, there are Two photographs on this page and while they might look like to depict Violence and happiness, they are separated by two nations: The struggle and happiness after a struggle.

Yet, Incredibly they are both from the same institution ( Meru University of Science and Technology ) , the kind that leaves deep and irreparable scars on a nation and its people for a lifetime.

The young men and women you see in both photos were probably born in the late 1980′s up to 1995 during the struggle for multiparty democracy in our beloved country Kenya.

Meru University students plight is not new. It has been all over the internet and has managed to enrage many Kenyans because they do not believe students should be treated that way.

When I was in Meru University, I complained about poor leadership using my social media accounts. I explained how the University lacked enough chairs , lacked books, basic amenities and students scrammed for food in the cafeteria and majorly sexual harassment of female students. They suspended me for one Academic year for ” tarnishing their image ” Via social media…After I had spent one and 1/2 Academic year at home, they later expelled me when I condemned sexual harassment within the university.

Magunga Williams, A blogger and Standard Journalist was later to write an article in the standard condemning the rot within the university. We launched social media campaigns to liberate the institution from the chains of imperialism and apathy but our efforts have not been very successful, It has been a long bumpy journey but I will not give up till something positive is done if not Today, Tomorrow.

So the Meru University students protested to condemn impunity within the university. Impunity had become too much, it had devalued them of their values and respect…It was time for them to say enough is enough. But what happened ? The Campus sent them home indefinitely and has kept them home for more than an academic year . What the Hell?

Today, hundreds of third years from Meru University students are languishing at home for standing up for their Rights. Making it clear, for condemning Impunity, demanding that their library be updated, demanding that sexual harassment pests be whisked out of the institution and for asking for better leadership .They are being kept home to Learn a lesson . What lesson ? That condemning sexual harassment is a crime ! That demanding for morality is a crime ! I ask again, what crime did they commit to deserve this ?

Last week, My girlfriend and I went to Meru to check on my friend who has now turned to hawking water to make a living as Meru University keeps him outside for a period not well known to him. Why is this being done to the Kenyan student ? I have never been ashamed of being Kenyan that much.

What is happening out there is little more than student terrorism. Our own Kenyan University students are being bullied, threatened and abused by an institution that knows the government will not care. It is outrageous that the ministry of Education, led by Jacob Kaimenyi who hails from Meru has given a blind eye to all these accusations making us summarize the argument that he is part of the gang, the enemy of the Kenyan student.

During the last months of his leadership, President Mwai Kibaki chartered all University colleges and I know he will be heartbroken to learn that Meru University is keeping students out of campus yet his dream was to see them learn and enable Kenya attain vision 2030.

Yet not one Newspaper or politicians is highlighting the plight of these young Kenyans. According to my sources, some of them have now become drunkards as others turn to drugs. This is how the Leadership in Meru University wants them to live…That is their happiness.

My girlfriend is one of the toughest person I know. Her family struggled to make it in life ; She understands hard life and suffering. Yet when she spoke to some of the Meru University students that came to greet me after they heard I was around, she broke down. She later told me that when she looked at the students, what she saw was enough to break her heart.

And so Meru University is accountable to itself. The people who promoted this Rot are Professor Magambo, Professor Gitonga and Dean called Ikihara. Soon you will be knowing the inside story and If I have not named any I Backward leader, expect that soon.

This is a travesty against the Education Rights of Meru University Students. It can happen to anyone out there. I am sure the situation is not only rife in Meru University but many other institutions. I t is time for Kenyans to come out and say enough is enough…We have given you too much, IT IS TIME TO TAKE IT BACK.

My sources claim that the ” Shits in Government ” are aware of the Rot in Meru University but dont want to act. WTF ?

After the conclusion of my meeting with many of these students, they begged me not to reveal their names in case I highlighted their plight. They were speaking with fear, that is what Meru University has reduced them into : Submissive and our right to freedom of speech was buried a long time ago . All of that has been taken away from these people – and the rest of us need to understand that we are probably next.

We need to fully grasp, and without doubt that our fellow Kenyans- Dignified, ambitious and innocent , have been terrorized brutalized and undermined. Their right to Education is being taken away yet it is enshrined in the constitution. This is Bullshit Folks !

This is criminal. This cannot be happening to our people, You cannot suspend a whole group and keep them home in the name of punishment ! We cannot let that happen, we the people , not even Once.

Folks. The Kenyan Media has been silent. They no longer fight for the ordinary Kenyan. Please share this as widely as you can across Kenya . You are now the only truthful means we have to spread the message.
Contact politicians, contact newspapers, radio and television stations. Demand that your voice is heard.