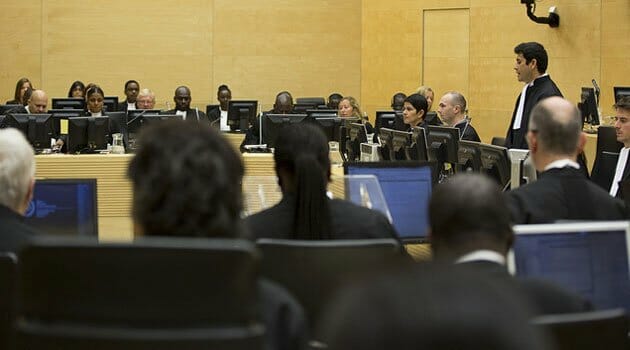 The Trial against Deputy President William Ruto and journalist Joshua arap Sang is expected to resume on March 23 after it was adjourned again.

When the trial adjourned on February 2 after the 30th witness failed to appear, the judges initially said it would resume on February 23.

The 30th witness is however expected to begin testifying on March 23 via video- link from a secret location after he was summoned by Trial Chamber V (a) judges.

According to the International Criminal Court (ICC) Public Affairs Unit, Witness P0727 has been unwilling to testify prompting the judges to summon him to appear.

The witness is further said to have made certain conditions before testifying.

“Having been relocated for the purpose of testifying for the Office of the Prosecutor, this witness has, at various times, either refused to testify at all or placed conditions on his testimony. Witness 727 is summoned to testify on March 23, 2015,” the Public Affairs Unit stated last week.

Previously, witnesses who recanted evidence when they testified were declared hostile upon the prosecution’s request.

Like most of the prosecution witnesses who have testified in the case against Ruto and Sang, the judges will decide on protective measures that will be applied on the testimony of witness P0727.

The witness is the last to be presented by the Prosecution before it closes its case against Ruto and Sang.

Earlier the prosecution had been asked by the ICC judges to close its case by March 12.

Upon conclusion of the testimony of the witness, the prosecution will make its closing remarks. The defence teams are thereafter expected to orally request for a motion of a no-case-to-answer before making written application within 14 days after closure of the prosecution’s case.

The defence lawyers however requested to be given 30 days instead of the 14 to make the application. They also requested the judges to increase the number of pages of the application of the no-case-to-answer from 40 to 100 pages.

A motion of no-case-to-answer is based on every charge the accused person is facing and the decision is also made for every charge. This means the judges can grant the application wholly or partially for some charges Ruto and Sang are facing.

Both are accused as indirect co-perpetrators with charges of deportation or forcible transfer of population, persecution and murder. The judges will issue a ruling of motion of no-case-to-answer for every charge.

If the judges believe the accused persons have a case to answer, the trial will proceed with the defence teams making their case. In such a situation, the defence teams will start giving evidence to counter the prosecution’s allegations.

According to the Document Containing Charges (DCC) released on August 1, 2011, Ruto and Sang allegedly planned attacks in the Rift Valley during the 2007-8 post election violence.

As early as 2006 to January 2008 it is alleged that the two; “planned to expel individuals namely members of the Kikuyu, Kamba, and Kisii (later referred to as Party of National Unity supporters).”

The prosecution while making its case against Ruto and Sang alleged that they were members of a network that controlled attacks in specific parts of the Rift Valley using derogatory terms like madoadoa, kimoriok, and kamama to refer to the targeted groups and take what belonged to them.

Sang allegedly used his show at Kass FM to coordinate attacks using coded language known to the perpetrators, whereas Ruto is accused of funding the assailants to carry out attacks around December 30, 2007 to January 2008 in Turbo town, the greater Eldoret area in Kiambaa, Yamumbi, Huruma and Kimumu.

Both Ruto and Sang have maintained they are innocent and described the ICC case against them as politically motivated.

They have also complained that the prosecution and ICC investigators paid witness to fix them.

Some of the nine witnesses compelled to testify by the ICC judges have recanted their evidence with most of them alleging that they had been promised money and relocation if they agreed to testify for the prosecution.

Others have also said they were coached to make their statements by ICC intermediaries.

Two witnesses of the witnesses compelled to testify alleged that they had been approached and asked to recant their initial evidence to the prosecution.