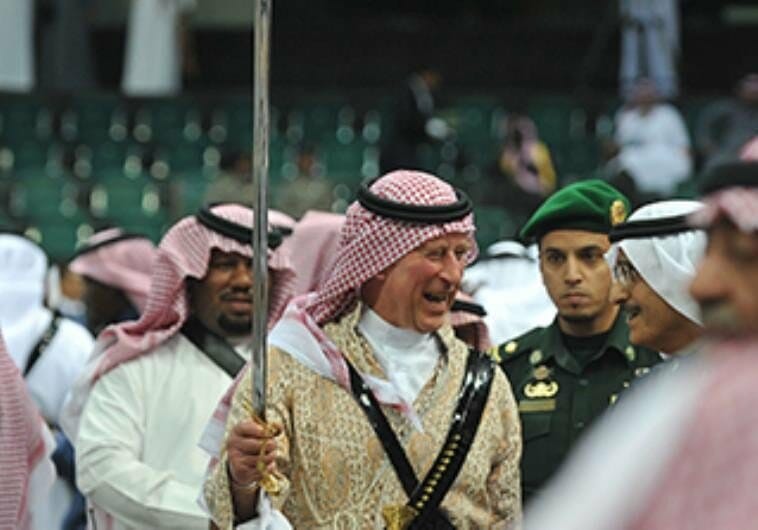 Now you could forgive an excited, and away-with-the-fairies, Prince Charles for ejaculating in his biodegradable green underpants when in the presence Saudi royalty, I mean royalty is royalty to a royal, right? And you could forgive a Muslim President for bowing to his forebears, but for the Poms to grovel to such a decadent Islamic sewer of inhumanity that is the House of Saud with half-mast flags is astounding. Is je suis Charlie already a distant memory?

The “Royal” House of Saud imposes Shariah Law of the most perfidious Wahhabi version. It gave rise to Osama bin Laden, the Taliban and ISIS and more recently has financed Yemeni Al-Queda terrorism. It countenances all forms of Islamic extremism while inflicting a trillion dollar Jizya (halal extortion tax) on the West.

It rules OPEC and is currently preventing the West’s self sufficiency in oil, slashing the barrel price by two thirds. Yet flags fly half-mast over the UK Parliament in deference to this, the birthplace and home of the originators of cancerous radical Islam.

So who was this dictator King Abdulaziz? Well he was well known for his insatiable sexual appetite. In addition to his innumerable concubines, the “pious” Wahhabi Imam married about 300 wives (some of them were only one night stands) while his princely sons are estimated to number 125 and no-one knows for sure how many daughters he fathered.

King Abdulaziz also encouraged the practice of slavery by personally owning hundreds of slaves for himself as well as for his family members. However, to avoid international embarrassment, the Wahhabi House of Saud was finally forced to reluctantly abolish slavery as late as 1962.

Other embarrassments caused by Saudi Wahhabism came in 1969 when the top religious Wahhabi sheik, Abdulaziz Bin Baz, emphatically declared that the Earth was flat and that the Sun revolved around it.

Contrary to American media propaganda the US still strongly supports the Wahhabi House of Saud which fears its own brand of terrorism as much as the US does.

In fact, Wahhabist clerics have already implemented American requests to change the meaning of Jihad (“holy war”) in Islam to the “Salafi” (meaning “noble tradition”) to please Washington. In reality the House of Saud, which is underpinned by the Wahhabist clerics, is as much hated by most Muslims as the US itself is hated.

That’s why the Saudis allowed the Americans on its soil to train “moderate” Syrian rebels and it’s why the Saudis are busily building walls around their innumerable gold-plated palaces to protect them from the monsters they created.

There are two Saudi ruling-class families (the political House of Saud and the religious Wahhabi House),  both of whom are intensely hated by millions of Muslims within and outside of Saudi Arabia.

The political House of Saud is a depraved, decadent, inbred group of mega rich layabouts who would make Caligula blush. It is kept in check by a powerful council of religious Wahhabi clerics who impose strict Shariah Law but dare not challenge the wealth and might of the Saud family.

The Saudis in turn pay lip service to the Wahhabist extremists in fear of their ability to garner outside Islamic extremist support.

Perhaps there is a reason for a flag at half mast over the UK Parliament because it is clear from historical records that without British assistance neither Wahhabism nor the House of Saud would be in existence today.

Wahhabism is a British-inspired Islamic fundamentalist movement it concocted and encouraged. Through its defence of the House of Saud, the US also supports Wahhabism both directly and indirectly despite the terrorism average Westerners suffer.

I must check if the White House flag is also at half mast.