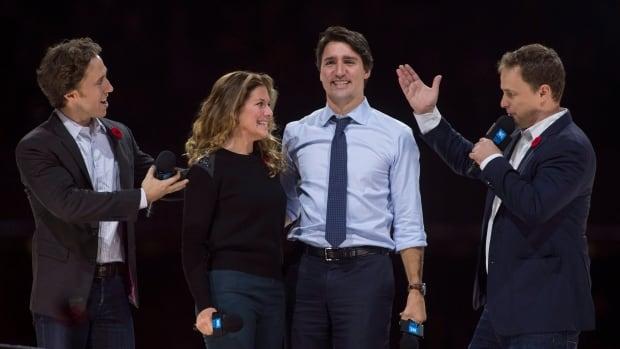 WE Charity Co-founders Craig (left) and Marc Kielburger introduce Prime Minister Justin Trudeau and his wife Sophie Gregoire-Trudeau as they appear at the WE Day celebrations in Ottawa on Tuesday, Nov. 10, 2015. (Adrian Wyld/The Canadian Press)

It sounds like the Kielburger Twins, Craig and Marc will get off scot-free by feigning contrition; and, their criminality in Kenya will be overlooked.

This is after WE Charity said it’s launching a restructuring and corporate review to “refocus” its “mission” after it became embroiled in controversy over a contract to administer a $900-million federal summer student grant program.

“After much reflection and with great care and concern for all our stakeholders, we have made some important decisions to refocus on our mission, simplify our program offering, and undertake a series of governance and structural changes,” said a statement released on 15th July 2020.

In Kenya, the charity was accused of corruption, bribery and mismanagement.

Peter Ruhiu, at the time WE’s country director for Kenya and Tanzania, has been accused of planning to murder a whistleblower Santai Kimakeke. Read in the link below.

Santai’s narration is chilling, it starts, “The next 24 hours was the most tormenting time in my life”.

Marc opened the meeting by saying, “We are going to have a serious conversation and it is going to be a tech free talk, please turn off your phone”. I reaching into my pocket to get my phone to turn it off, and as I got it out, Marc forcefully grabbed my wrist, twisted with his left hand and took my phone and gave it to Karin. At this point I became furious, agitated and almost walked out of the boardroom, this is when he said, “you do not want to do that because there are two armed men out there who are going to deal with you in a more ruthless manner”. Marc was accompanied to the meeting by 2 police officers, they stood outside the whole time he interrogated me about the blackmail letter.

Read more in the link below:

Santai was silenced, asked to withdraw his statement. He stated

‘CLARIFICATION ON MY EARLIER POSTS. My name is Santai Kimakeke. The information that I had shared earlier regarding WE and Marc Kielburger were incomplete, inaccurate, misrepresented and shared without contexts. I sincerely apologize’, Santai wrote on Monday (6th July 2020)

Question is, how can he call the whole long narration false? We find it very unusual.

We Charity forces whistle-blower to recant evidence of mistreatment

Santai Kimakeke’s seems to have exposed a running thread of racism, corruption, bribery and cover-up, as another  former staff of WE Charity Amanda Maitland who worked for WE Charity until June 2019, said a personal speech she was supposed to deliver during an anti-racism tour was largely rewritten by a mostly white team of staff.

The speech was watered down.

WE Charity on the spotlight as another mistreatment case emerges

There are fears that the WE Charity management might get away with these crimes.
“It is especially concerning that the former Lieutenant Governor of the Province of Ontario has agreed to shepherd the restructuring. Perhaps he is unaware of the situation in Kenya. Thank you for all your efforts. I hope Santai is okay”, stated a source

The incidences of bribery, corruption and threats to silence the whistleblower should not be taken lightly by the Kenyan authorities.

This and other donor fraud must be dealt with firmly.

In this article:Craig, Kielburger, Marc, We Charity