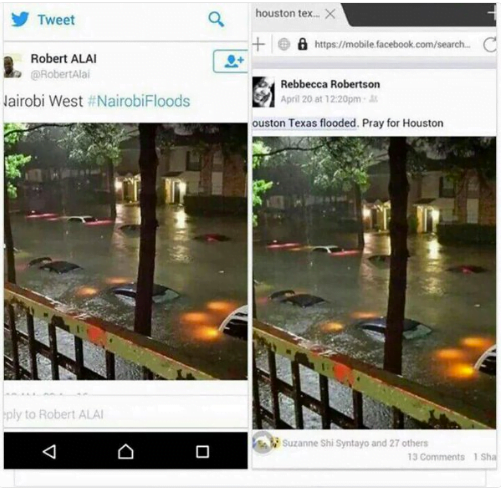 Caption : Fake photo posted by Twitter Grandpa Alai to stay relevant. Photo was not from Nairobi West but from Houston.

Kenyans from all walks of life are now calling for the retirement of Robert Alai, after he posted a fake photo depicting Houston Texas as Nairobi West, in a bid to dramatise the flooding in Nairobi and score some Retweets.

Alai has been under the spotlight for extortion and operating under the same standards as mainstream media. Robert who was once a force to reckon with, conceded his role as the people’s watchdog and transformed into just another bribe-seeking mainstream media scumbag.

Perhaps the most shameless contradiction that exposed Robert Alai’s greed was saying that Cooperative Bank is riddled with corruption, then changing his story a day after. A blogger with no honor or shame.

We do respect his work before getting consumed by greed and the need for validation by mainstream media and hope that he can take a break to soul-search. But fame is like a drug, and his constant media appearances have been the cause of his downfall.

Mainstream media’s influence is diminishing. Blogging is the final frontier. Mainstream media journalists are now using bloggers to make themselves relevant, and Alai has constantly taken the bait. He has been a disappointment to bloggers who once looked up to him.

We used to be fans of Owaah.com but he has also been entrapped by mainstream media and status-quo functionaries meaning he will be less productive for fear of being sidelined from certain circles. We see @Owaah being praised by Ory Okolloh, Wallace Kantai and other mainstream agents, meaning that his future is intertwined with their endorsements.

As for me and my team, we don’t need any validation from mainstream media. We don’t need their invites for interviews. And we encourage other bloggers not to go the Robert Alai way. He is now no longer the influential blogger that he used to be.

We kindly advise Robert Alai to take a break and detox from the influence of mainstream media journalists that may have rubbed onto him. Together with Boniface Mwangi the bogus activist, they can reinvent themselves and serve Kenyans better, without dependency on mainstream media.

Instead of embarking on a hate-speech against Cyprian Nyakundi, Alai, Boniface Mwangi, Ory Okolloh, Betty Waitherero and Abraham Mutai, should simply take a break from social media and reflect on their contradictory positions. From being radical anti-Government activists, they have recently toned down, leaving their audiences confused.