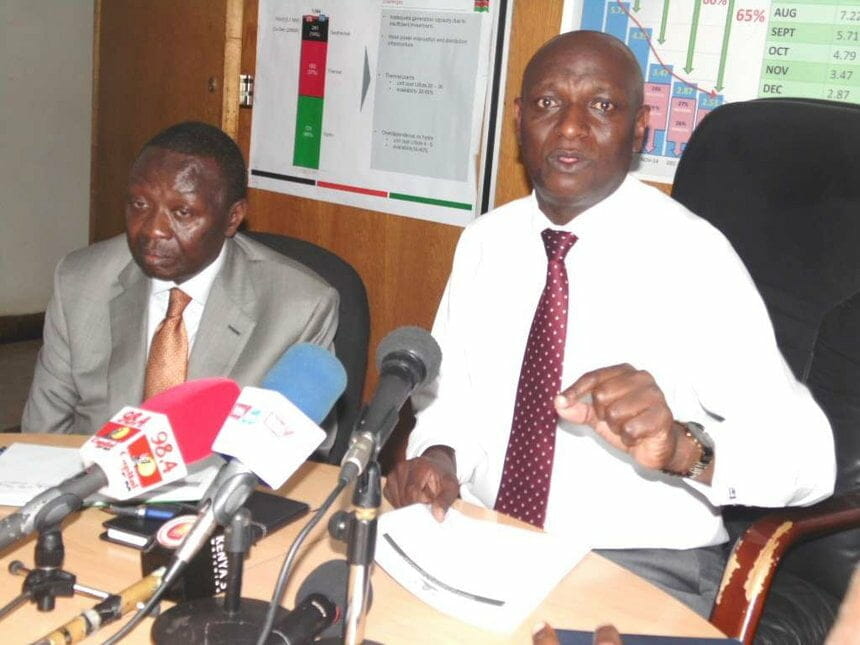 The Ministry of Energy and Petroleum is a key asset of President Uhuru Kenyatta where he has planted his person as PS Joseph Njoroge, while Deputy President William Ruto has planted Charles Keter. It’s the cash-cow that’s expected to finance the forthcoming elections.

Joseph Njoroge was the Managing Director of Kenya Power prior to being appointed as the Principal Secretary in the Energy Ministry. He was also the chairman of President Uhuru Kenyatta’s campaign team that regularly met at Windsor Golf and Country Club during the 2012-2013 electioneering period.

Njoroge knows all the loopholes to fleece Kenyans using the national utilities service provider, and has played a major role in seeing Kenya’s competitiveness and standing as a hub for industries diminish, largely due to Kenya Power’s incompetence.

Ethiopia has emerged as the major attraction for foreign investors due to its clarity in electricity pricing, and efficiency of the national power grid. In Kenya, it’s the exact opposite. Kenya Power is a cash-cow for looting by the leaders of the day, ever since the days of Samuel Gichuru, the thief wanted for money laundering in Jersey.

Njoroge has planted technical people to rig power bills, inflate costs and fleece them by either double-charging or wrong estimates. To cover-up this grand heist, Kenya Power uses public relations companies to bribe journalists so as to cover up the numerous complaints from customers.

Mainstream media consists of individuals who are currently living beyond their means. They want to drive big cars, play golf, rent deluxe apartments and date the most expensive women. The female journalists are competing against each other, on who has the most expensive car, designer wear or who hangs out at the priciest of joints.

Journalism is no longer a calling but an avenue to achieve money and fame, albeit short-term. A simple assessment of journalists Instagram accounts will reveal a start disparity between the life they live, and the wages they earn. To cover this deficit, journalists resort to bribes from corporates and politicians so as to stay afloat. It’s one toxic ecosystem.

Moving on, Joseph Njoroge has planted technical staffers at Kenya Power to fleece clients. For instance, in the Kenya Power Parklands head-office, there is an individual called Githinji who colludes with field staffers to make wrong estimates and inflate bills. They delay in reading meters, and then send the wrong bills to clients. They always claim to have a shortage of manpower to make accurate readings, but seem to always have people at the ready, to disconnect paying clients.

Githinji is just an example of the individuals that Energy PS Joseph Njoroge has planted in Kenya Power, so as to manipulate bills and raise money for the next elections. But what is the net-effect of this corrupt practices on the country’s attractiveness to investors? How does spending an entire day at Kenya Power trying to resolve doctored bills help our collective productivity?

We need to call out Joseph Njoroge, the thief who has planted technical staffers at Kenya Power to manipulate bills so as to raise money for the next general elections. Ironically, Kikuyu’s who are equally victims of this extortion scheme by Kenya Power, will be the first to sing “Uhuru Tosha” despite the obvious compromise his policies have been to their businesses.

Due to conditioned messaging by self-proclaimed Kikuyu spiritual leader Njogu wa Njoroge who recently denied that he’s a homosexual, Kikuyu’s will not stop to even petition Uhuru on why Alcoblow, Kenya Power, Traffic Police harassment, poor infrastructure, collapsed banking sector and overall economic decay has taken root during Jubilee’s tenure. They will blindly support without even bothering to assess on the true consequences of their bottom lines, all in the name of sycophancy.

How can we save this country from ourselves dear Kenyans?