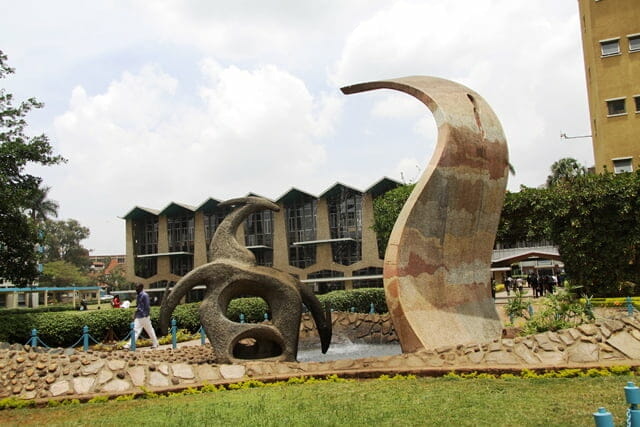 All is not well at the University of Nairobi as vice-chancellor Peter Mbithi is being accused of practicing tribalism and manipulating happenings at the prestigious institution.
This is taking place with claims that UoN it is operating at a Sh2.5 billion deficit due to questionable purchases and procurement. Among them, the multi-million renovation of the VC’s residence.
Already questions are being asked among the varsity community as to why Mbithi wants to be in charge of certain duties under the office of deputy vice-chancellor academic and finance. The DVC academic and finance is Bernard Njoroge.
Those well versed with varsity operations say DVC administration and finance is the most powerful in terms of actual operations.
Mbithi served in the position for 10 years during the era of George Magoha as VC. Magoha had served in the slot for two years before being named the VC.
Mbithi is accused of being out to transfer the duties to his office in what insiders say is to cover up the ill-doings in the office when in charge.
To perfect his operations, Mbithi has made himself the chairman of investments and pension scheme. It has emerged, the trustees in charge of the scheme never elected him.
He has also managed to have Enos Njeru as the chairman of tender committee. Njeru is a key ally of the VC and was earmarked for the position of DVC A and F. The two are said to be close to Education cabinet secretary Jacob Kaimenyi. That Mbithi is a master of tribalism is no secret. At the Faculty of Arts Design and Development, he has imposed Kimeu Musau to head when a one Abonyo was the most qualified and favoured.
Mbithi also had Angela Mumo land deputy librarian technical services. The position is strategic and those knocked out due to Mbithi influence being Rosemary Otando and George Nyawara.
A one Mbugua was transferred from a key area of recruitment and training being replaced by Leonard Mlota with Mercy Musembi his deputy.
At Students Welfare Authority most of the employees are Kambas.
Those who have benefited from his community include Peter Ngao, Ndeti Ndati who replace Mosambu a Kisii at the School of Journalism as director. The current acting dean School of Physical Studies is a Kamba and Eddy Njenga was replaced as director of post-graduate studies board by a Kamba.
That all is not well at UoN is seen with the current wars between top managers that have sucked in the university council chairperson Idie Farah.
Njoroge wrote a letter to Farah complaining the VC was meddling in his office administration affairs.
Njoroge was responding to Mbithi circular giving new guidelines with regard to approvals for expenditure. To the VC, all expenditures of Sh100,000 and above will be approved by the VC with the recommendation of DVC administration and finance.
Surprisingly, when Mbithi was DVC administration and finance such rule never existed. It is imperative to note, DVC A and F is the head of administration and finance division of the university whose functions include management of personnel matters, finance and assets.
Farah has come to defence of Mbithi arguing the VC is the university’s accounting officer.
Unconfirmed reports say Kaimenyi is fully involved and wants his favoured candidate for the A and F slot Prof Njeru sneaked in. It took months for Njoroge to be appointed even after emerging number one in the interviews.
Part of Farah letter to Njoroge reads: “Since you had categorically stated that you have no intention of the VC, who is the supervisor, you are now required within seven working days of receipt of this letter, to show cause to the council through its chair why disciplinary action against you on ground of discipline, gross misconduct, insubordination and incitement should not be taken.”
Analysts say, the power struggle at the institution is set to haunt many and already, parliamentary education committee plans to summon Kaimenyi to explain his role in the fights. Njoroge is a brother of principal secretary Energy Joseph Njoroge and hails from president Uhuru Kenyatta’s backyard of Gatundu South.

Here are the Letters as sent to me by my Sources 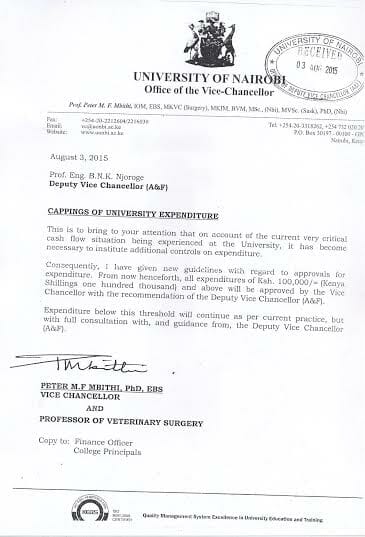 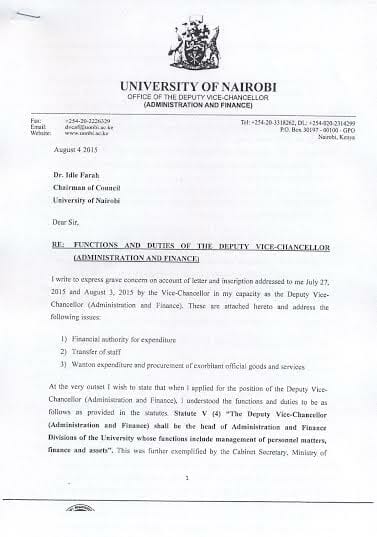 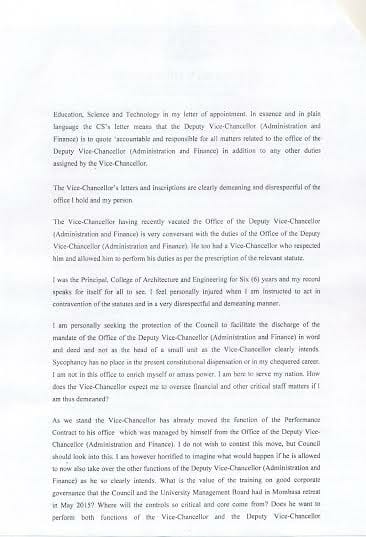 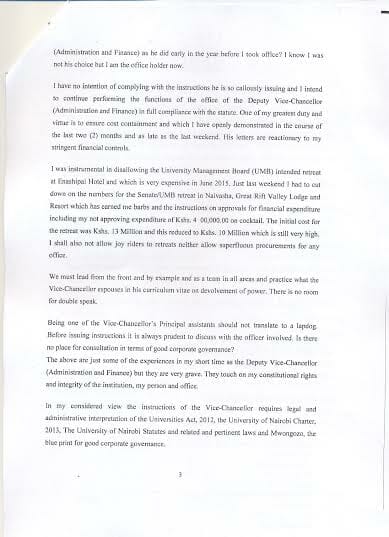 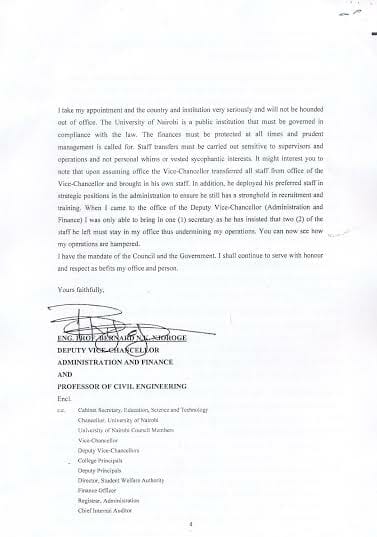 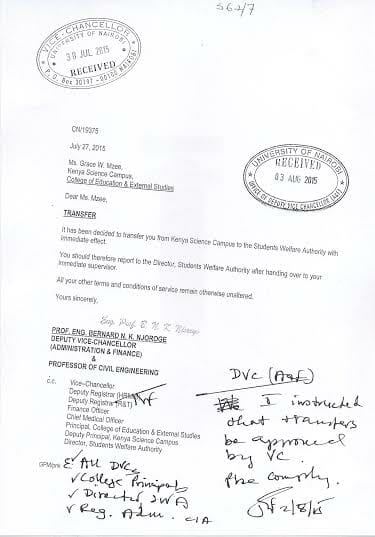