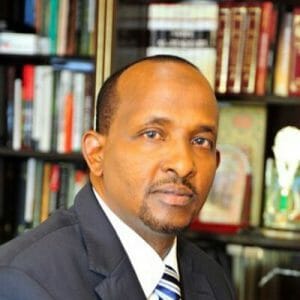 To many Kenyans, Leader of Majority in Parliament Aden Duale is the Jubilee government’s foremost defender.
The Garissa Township MP takes on opponents of Jubilee – from the civil society to CORD leaders and governors pushing for more funding for the counties through a referendum – head-on.
His recent spat with Mr Isaac Ruto, the chairman of the Council of Governors, is the latest demonstration of his determination to defend the government of President Uhuru Kenyatta and Deputy President William Ruto.

For Kenyans who remember the Kanu regime, Duale is a stark reminder of the sycophants of those days. The likes of politician Peter Oloo Aringo, who at some point referred to then President Daniel arap Moi as the “Prince of Peace”, a title Christians reserve for Jesus Christ.
Duale recently said he was ready to take the bullet for President Kenyatta and Deputy President Ruto.
But, beneath the sycophancy is a man whose reputation, together with that of some members of his family, is blotted with scandal and accusations. Duale stands accused of land-grabbing and nepotism, while at least one member of his family has been linked to terrorism.
In a story complete with the intrigues of attempted murder, Duale is accused of grabbing a piece of land belonging to Garissa Primary School where he has now built a four-storey building called Lillac Centre.
Those familiar with the story say that sometime in the 1990s, a group of Islamic scholars requested the board of Garissa Primary School for a piece of land to put up a mosque. However, in 2009, Duale asked the mosque’s management to sell him a part of the land.
The mosque’s management committee was split on the issue but a majority of the members opposed the idea, noting that the land still belonged to the school.
One of those who opposed the request was the committee’s chairman, Mr Yussuf Jama, the brother of Garissa County Governor Nathif Jama.
While negotiations were ongoing, Jama was shot outside the mosque by a lone gunman early last year on his way home from evening prayers. He resigned his position soon after.
Who replaced Jama? Mr Dubow Bare Duale, a brother of the Majority Leader. Soon after, the land matter was resolved and Duale allowed to lease the land.
The school has appealed to the National Land Commission to revoke the lease and asked the Ethics the Anti-Corruption Commission to institute proceedings against Duale. But the complaints have not been acted on for Duale has threatened the officers with censure motions if they dare open files against him.
The second questionable deal involves Duale’s acquisition of a piece of land in Nairobi’s Eastleigh, where he has set up the Nomad Hotel.
The land belonged to the Ministry of Livestock where Duale served as an assistant minister and it remains unclear how it changed hands.
Another dark secret Duale has successfully hidden from his Jubilee benefactors and Kenyans is the suspicion that his family could be involved in supporting terrorist activities in North Eastern region and beyond. In fact some in Jubilee tellingly refer to him as the terror donor within the government, a moniker which is pregnant with innuendo.
In April 2013, armed gunmen attacked Kwa Chege Kiosk and killed 10 people. Kwa Chege was an informal eatery, popular with the up-country people and employees of development organisations.
Soon after this incident security officers in the town questioned Duale’s older brother Hassan Bare Duale.
An officer involved in the investigations, but who requested not to be named for fear of his personal security, said:
“There were too many coincidences, which we simply could not ignore. Our intelligence showed that whenever he traveled to a place, say Mombasa, an attack would occur soon after he left. People came to us and told us to connect the dots. We did but we did not come up with any solid proof to charge him. But it is quite telling that after we questioned him, the attacks abated, at least for a while.”
According to security officers, Hassan, a former Administration Police officer, is shielded by his brother Aden’s political clout.
As was reported recently by a section of the local press, a low-level but sustained campaign of intimidation and ethnic cleansing against non-Somalis is under way in Garissa town and neighbouring villages.

Duale is the MP of Garissa Township where most of these attacks have occurred. However, he has never condemned this systematic targeting of a section of Kenyans in his constituency.
In the past, Duale has accused CORD leader Raila Odinga of nepotism for appointing close family members to public positions of influence while he was Prime Minister.
But those who know him well say he is guilty of the same: He is said to have influenced the nomination of his niece, Mariam Hassan, as a Member of County Assembly on his United Republican Party (URP) ticket.
He is also said to have arm-twisted the National Land Commission and the Ministry of Lands and Housing to hire another of his nieces, Fatuma Borrow, as the Lamu County Lands Secretary.
She did not apply for the job in the first place, but her name was on the short list. She is said to have failed the interview, answering only three out of 10 questions asked by the panelists.
However, Uncle Aden Duale came to her rescue and she got the job that pays her more than Sh400,000 per month.
The Leader of Majority is said to be currently lobbying for another of his brothers, Noor Bare Duale, to be appointed the chairman of the Kenya Revenue Authority. Noor is a businessman with a lucrative tender to supply drugs to government hospitals in the North-Eastern region.
Other accusations revolve around his alleged role in influencing tenders. Mr Duale is accused of ensuring major contracts in his county by the national government are issued to him and his family members.
These include the construction of five polytechnics in Garissa at a cost of Sh150 million each, construction of Garissa Livestock market, which was funded by the World Bank under the Kenya Municipal Program at a cost of Sh125 million. However, the project stalled due to variation of costs by the contractor.
Last year, another company associated with his family, Hagar Construction Company, was given a contract to fence the Garissa Provincial Hospital at a cost of Sh40 million. However, the project which was awarded under the former Ministry of Northern Kenya Development is yet to be completed after the company varied the cost of the contract.
The Duale family has spread its interests beyond the Kenyan borders. Duale’s sister Arfon is a member of Jubaland Parliament in Somalia.
Jubaland is the region in southern Somalia which was created by the Kenyan government as a buffer zone against Al Shabab militants.
Arfon is a close associate of Professor Mohammed Abdi Mohammed, popularly known as Professor Gandhi, the first president of Jubaland and now Somalia’s ambassador to Canada.
She went to the United States around 2008 on a Somali passport as a refugee but came back when the Jubaland government was being put in place.
The family is said to have lobbied Prof Gandhi and the current President of Jubaland Sheikh Ahmed Madobe to have Arfon appointed to the region’s Parliament for its own interests.
The Leader of Majority hails from a wealthy merchant family that owns a plethora of businesses and properties in Garissa, Nairobi and beyond.

But having achieved financial muscle, the family is now keen on consolidating its political clout, not only in Garissa County but also in the former North Eastern province.
Duale’s position as Leader of Majority in Parliament has given him and the family an important platform to establish grassroot links throughout the North Eastern region for future political endeavors.
“The ultimate aim of Aden Duale is not to stick with Jubilee but someday break out from it and form a strong political party for the Somali community and bargain for a higher post in subsequent governments. That is what his family members tell people in public,” said our source.
The question nagging many people is why the President and his deputy are still indulging Duale at the heart of government despite being linked to terrorism, corruption and ethnic profiling of Kenyans. Could he be hiding behind the bravado of being Jubilee’s foremost defender to pool wool over the eyes of his benefactors? And if so, why aren’t the intelligence forces outing him? So many question, so few answers. But hey, this is digital Kenya. Karibu.