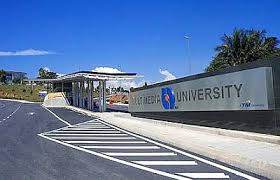 Multimedia university of Kenya- the ICT centre of excellence in media and business studies is rapidly turning to be the centre of excellence in corruption, intimidation and Nepotism.
For what I term a decade of fierce struggle, failed dialogue and blackmail by the varsity management, the students led by the student union, Multimedia University of Kenya Student Union (MUKSU) have always and still are on the frontline to ensure their beloved institution stands tall and leads in the education arena.
Mid last month, the union organized for an open forum between the students and the management to provide an avenue to dialogue various issues. The management that thrives on ignorance did show up without the VC who decided to ignore and failed to ignore the invitation to the function.
The most pressing issues were; The removal of the academic registrar, Dr. Livingstone Ngoo who handles students like slaves and often uses the ‘F’ word to address students. He has also been ignoring the agreed terms of fee payment and evicting students from lecture rooms.
Other issues on the table included misappropriation of funds lack of enough learning facilities i.e construction of engineering labs, increase the number of books in the library and the reading/study space. Another contagious issues has been the perimeter fence.
MMU being adjacent to Nairobi National Park, the security of students has been at risk from the astray animals from the park that sometime make their way to the varsity compound thus threatening the lives of the students and other inhabitants.
During the 25th June meeting, the students spit all the murk they have/are going through and didn’t leave any other pothole unidentified. After the students tabled all their problems, the management couldn’t neither respond or convince the students that they were committed to handle the hiccups so that service delivery could be smooth in the future.
Due to this the students went on rampage as this is the only language the bureaucrats understand well. They blocked Magadi road for about 2hrs as the anti-riot police were called in from Langata to counter the students.
The following day on 26th, the students in their yearn to have a better MMU decided to have a better MMU decided to gather and meet the management for further dialogue but instead Dr. Ngoo gave a vacation notice till further notice of which angered the students who later engaged in running battles with the police.
Since then, the student union(MUKSU) has tried to get the management to the roundtable to reopen the varsity but they have continued to intimidate the students by getting them arrested and detained.
The management has been intimidating students, searching the hostels and confiscating their properties in their absence. So far 18 students of whom 13 are student leaders have been summoned to appear before the disciplinary committee and more are expected to be called for the same in the name of inciting students.
To counter this, the students have filed a petition at the High Court of Kenya to compel the management reopen the institution as soon as possible, recall all students unconditionally and allow students pay fee in 50:20:20:10 formula among others. The hearing is on Wednesday 18th July.
Afterwards the students are to hold a peaceful walk to parliament and the Ministry of education to meet various stakeholders to help push the Reform agenda. As it trended on twitter today #MMUCries, may the cries be heard and all the tears shed get Justice.