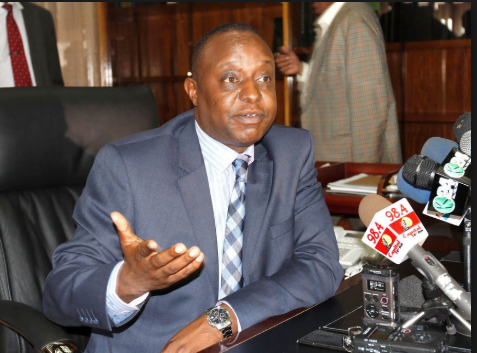 For those that followed the NYS saga, you must agree with me that IFMIS was mentioned severally as the enabler of mega looting within the county. Through IFMIS billions were looted at the ministry of devolution and nothing happened to those that cat-walked and used the money to seek political positions.

The only reason the National Treasury never suspended IFMIS is that they use it to loot state coffers. We received an interesting email this morning.

There are some irregular hiring in The National Treasury. Two that I know of.

Stanley used to be a PA for the Director General Accounting Services and wasn’t a Government employee. When the director IFMIS seat fell vacant, the DGAS appointed the PA to that position. This is a very senior position in government and we thought it would be advertised for all Kenyans to apply for it.

Moreover, he was not hired by Public Service Commission. He was hired via KRA and posted to the National Treasury. DGAS was also hired the same way. Is the PSC not supposed to be hiring? KRA is paying them so much above what employees on that job group are supposed to get.

Why is government wasting money? why wasn’t the position advertised? why was PSC not involved? why is an inexperienced person for the position in charge of a docket that runs the system that enacts The Public Finance Management Act and that disburses money across all counties? what cartel is there? why weren’t the many experienced government staff in that department never considered for a promotion? If none there was suitable why wasn’t a government employee in other areas interviewed and transferred to the post?

Kindly post this and let’s gather all information from the public to expose this scam. Run with this story Man. Ran with it.