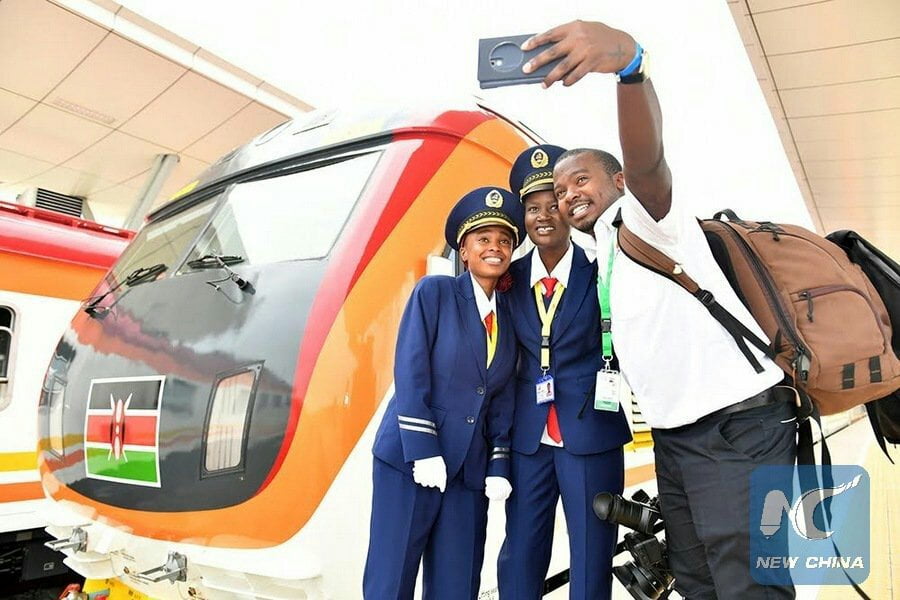 CNYAKUNDI.COM has received a document that lays bear the atrocities committed by Chinese with the help of a few Kenyans at the Standard Gauge Railways (SGR)

In the document, an employee whose name we cannot reveal, writes about the issues they’ve been raising with the management which goes unresolved.

The company is accused of engaging in PR hoodwinking Kenyans into believing that employees are treated better.

This is not the first time that such revelations are coming to the fore. In July, 2018, the standard media group highlighted the plight of Kenyan workers at SGR.

The current revelations, however, are dire and urgent and requires the government to act.

This is not ‘a little misunderstanding’ as the Transport CS James Macharia had put it in July, 2018. This is exploitation and torture!.

Here is the detailed issues raised as received by the employees; as per titles:-

The above named group of employees needs your intervention please. The following are issues that we have been raising with the company management but are not yet solved.

We have been having training since we join the company through Railways Training institute that have been conducted by various institute from China. Such as South west Jiatong University China that trained the first group from April 2016 to August 2016,(input for group two) and GPI TRAINING INSTITUTE from Beijing China that conducted farther training and refresher course and after completion awarded us with fully certified certificate as Assistant locomotive drivers.

Contrary to our expectations and promised made by company through supervisor of 30KES per hour, our immediate supervisor direct that we would have another test that would be used to determine who would be promoted to take role as full assistant locomotive driver and 30kes per was used to pay Rest at Nairobi locomotive depot.

As a group we decline to take exam under his supervision and take our grievances to high management team that involve general manager since our supervisor had issues of being biased and leaked exam to some who were regarded as his friends this was proven by having privileges and were given more overtime hours than they deserved but the general manager with his convoy overlooked our request and in return we were forced to take exam that was accompanied by massive victimization and unstandardized where only ladies and selected few passed and rest before duty was scraped and 30kes was not honored.

Therefore we are requesting the following:-
1. Provide sanity in this office by providing high supervision to how Chinese are training us.
2. Provide a time limit for us to move from one level to the next with a certain ceilings to minimize waste of priorities.
3. Supervision of examination that would ensure merit and fairness.
4. Ensure Kenyan are doing actual driving locomotive with Chinese driver as instructors.
5. Stop many PR’s that are only done by coached colleagues which are made to deceive Kenyans and the rest of the world via the media.

Ladies have been coached on how to drive locomotive for “PR” purposes. This is evident by photos taken and displayed at notice board outside dispatcher room, that all ladies drive locomotives while men’s drive simulator In real sense,no single Kenyan is driving the locomotive,all they do is record videos of Kenyans driving and share via the media to fool the people of Kenya. 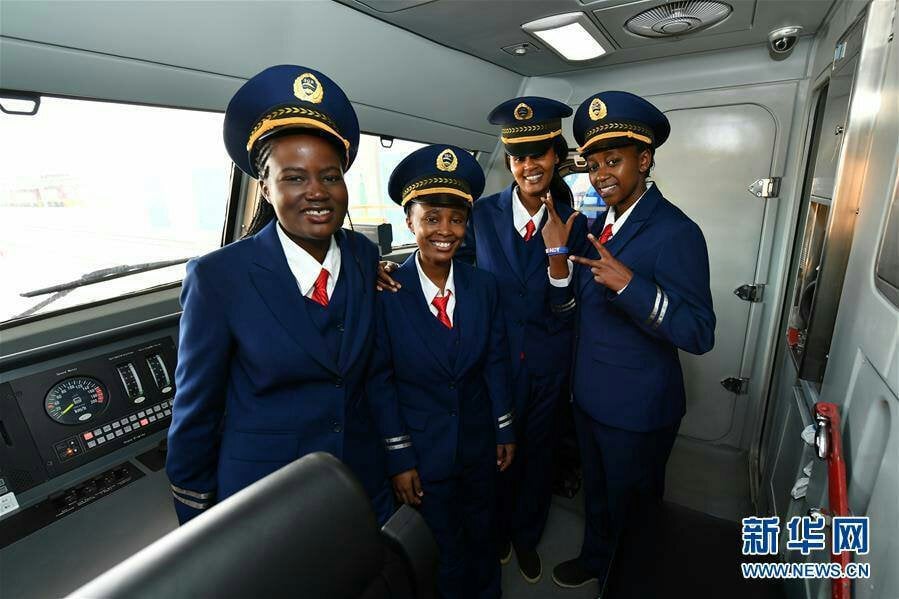 CAPTION: Assistant Locomtove Drivers posing for a photo as part of SGR’s strategy to hoodwink Kenyan into believing that employees are treated better

The salary we are receiving is unfair compared to the responsibilities of an assistant Locomotive driver. A Chinese earns a salary of at least 2000 US dollars per month and an upkeep allowance estimated to be 500 US dollars per month while their Kenyan counterpart (Assistant locomotive drivers) earn 470 US dollars an amount that is weird to us. [We earn same salary with the room service and the locomotive cleaners and we are qualified professionals which to us is demoralizing]

We have not developed financially and career wise. This is evident by fact that we are having job level and earning same with anybody else who joined the company last year. These who are handling DF8B, are required to be on call that is taking better part of their life serving the company.

There is an article in the company policy that states, when on duty at an away station, every staff affected is entitled to a shift allowance of Kshs. 2000 and a meal allowance of Kshs. 200 per meal for each meal that finds you at work. It has never been implemented because of excuses better known by the Chinese bosses.
Staff van that take us to the nearest bus stop has turned to be at the mercies of WILLIAM (Chinese staff personnel) whom can decide where to be dropped regardless of time of the day and risk involved.

Therefore we are requesting your office to see:-
1. How we can be fairly remunerated to compensate time that we are serving the company.
2. Company to be obliged to take the assistant drivers at least at cabanas and mlolongo.
3. Stop double punishment where unpaid leave is deducted from total hour yet it is not included in hours calculation.

We are aware that the company is paying workers salary to enable them to afford the current Kenyan cost of living and support the lives of workers to build a brighter future. As assistant locomotive drivers, we are prone to straining with the little pay received in our bank accounts from the company.

The contract is normally the same, remuneration stated is the same, but some of us are being favored by the supervisor who rewards them with working hours they have not worked for. 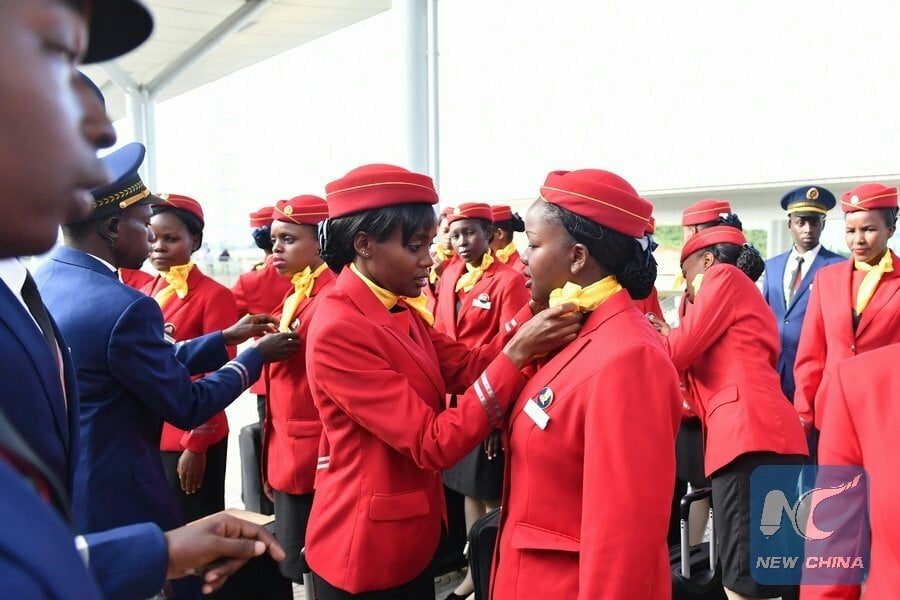 To make it clear, we have detected big differences in payments in certain groups of individuals with vague excuses. Which indicates favorism from those assigned duties to present job cards to HR office for payment.

The supervisor has clearly proved to have favor and corruption of the highest level. There is finally a hidden agenda on that reward.

This is subjecting the employees to no grant and very little limit that can not afford one enough money to finance project. Therefore we are requesting you to intervene and convinced the company to have that agreement.

Case handling by the supervisor all through does not work since he gives fake excuses mentioning that it is authority from HR office and sometimes company policy.

Hard cases to him befalling calculation of our working hours reflecting to us that we are casual workers yet we are not.

He has assumed his responsibilities as our supervisor and now has given office of training and work supervision including planning our shifts of work to some unqualified individuals.

The fact that, he claims to be an education engineer is questionable by the group. Since we are cheated to be undergoing training and yet the training is never directional the training period, certification, biased exams especially practical exams.

UNFAIR dismissals steered by the supervisor have happened and some of us have been affected by that.

(cnyakundi.com has withheld names and contacts)

One (name and contact withheld) was expelled just because he and the supervisor didn’t get along with some issues concerning work.

The guy had paid a fee of Kshs. 212,000 to Railways training college after selling the family land to facilitate the same and now he has been jobless for the last two years.

We enquired when we will drive the locomotives the supervisor replied with a shocking answer that we should “Continue dreaming” and that we should not think of doing that any time soon.

1. Mr Navy Wang (HR department) has been threatening the whole SGR staff that he is untouchable and even the president/the police/the court can do nothing about it. He once told a staff he was firing that ”EVEN IF YOU TAKE ME TO COURT I WILL BRIBE THE JUDGE WITH MILLIONS OF SHILLINGS AND YOU WILL STILL LOSE YOUR JOB”. When we joined the company while signing the contracts he told us that “KENYANS ARE DESPERATE FOR JOBS”. He was also quoted saying ” WE WERE FORCED TO WORK WITH YOU GUYS” so it’s either you ship in or shape out.

2. The locomotive depot has a number of unqualified personnel including those handling the dispatching systems and calculation of working hours, including our colleagues whom we feel they don’t have the qualification to handle such work.

3. Chinese have been importing almost everything, from food ingredients, cigarettes,beer,broom,sugar,washing detergents, writing materials and many more. They hide them in a store located in the depot and we are cautioned not to take photos.

4.We joined the company to train as locomotive drivers and achieve that goal with the shortest time possible, but the Chinese management at the depot is not concerned with the same, we are always working without no direction and we don’t know what we will end up achieving at the end of it. So we request immediate intervention by the ministry of transport and the ministry of labor to resolve these issues as soon as possible because we have aired our issues to the Chinese managers and they have done nothing about them.

5. Eighty (80%) Percent of Chinese workers are in Kenya as tourist, they don’t have any legal document to work in Kenya,others have expired work permits that are renewed at the airport a day they are travelling to China, thus the government is loosing too much money because the Chinese are evading tax. Therefore many Kenyan youths are jobless because of the above reason.

6.Chinese are really abusing Kenyan laws,they are frustrating Kenyans by imposing their own laws which are totally against Kenyan labour laws,they have bribed some Kenyans officials from different ministries who side with the Chinese managers to mistreat Kenyans.(some of them are from Kenya Railways Corporation (KRC), labour office e.t.c) They should be investigated, we can give names if need be.

7.Poor calculation of working hours should be rectified. The current system that is being used now by the Chinese management is very poor. The contract states that we are permanently employed, buy in real sense we are working like casuals,that is,you are paid when you travel to Mombasa and when you are coming from Mombasa. When you book off at Nairobi and Mombasa, they assume you are not working thus no pay yet you are always on call at anytime so you can’t engage in any other business because you may be called anytime for work.