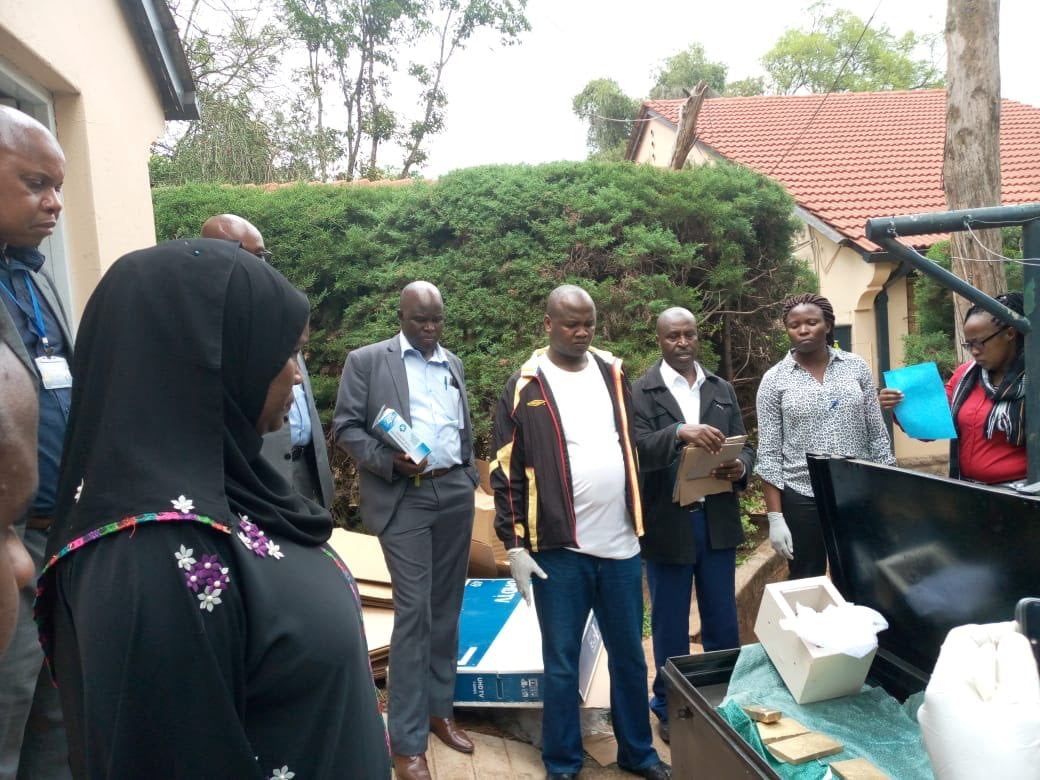 The report titled ‘Report of Zandi’ that was shared by a fan of this site fingers Interior Cabinet Secretary Fred Matiang’i and Ford Kenya leader Moses Wetangula.

Part of the report shows the duo asking for bribes.

Below is the story:

This report specifies in total the experiences of Mr. Ali Zandi – representative of Zlivia company, a gold trading company based in Dubai and their missing goods that were within the Kenyan borders on transit to Dubai from the Democratic Republic of Congo (DRC).

Mr. Massoud A. Zandi calls Hon. Moses Wetangula (former Foreign Minister) to seek advice on how to secure the safe release and return of the goods.

Moses Wetangula makes some enquiries and confirms with Hon. Fred Matiangi (Minister of Interior) that the goods were incleed seized.

15th Dec, 2018 Moses Wetangula flies to Dubai and assures that the goods can be released. That he has spoken to the minister of interior Fred Matiang’i who has requested for $ 2,000,000 upfront.

Sheikh declines this proposal and the talk goes quiet.

On December 25th, he is taken to the airport by Mr. Zaheer Jhanda and a person identified as a police officer Mr. Michael Waweru (Telephone number (0775 607693).

At the airport Mr. Zandi is shown part of his concession which he confirms with his own signature that is written on the boxes.

Mr. Jhanda approaches Mr. Zandi on behalf of Mr. Matiangi who questions why the $ 2 million cannot he paid upfront for delivery goods.

– Meeting held in Karen (seeiningly Karen Blixen). – Matiangi gives Mr. Zandi assurance that Mr. Zandi will have the goods in his procession 3 or 4 days and when pressed for concrete answer; confirms Friday 25th of January 2019 as the date for the delivery of goods.

January 24th 2019 – Letter sent from Sheikh Rashid AI Maktoum to H.E Fred Matiangi requesting the speedy release of his goods.(picture attached). No official response is made. 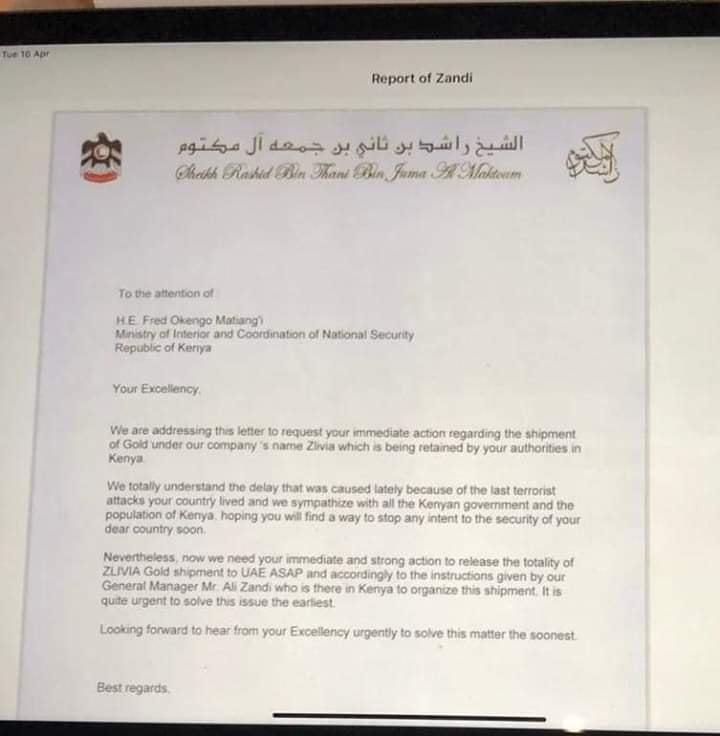 – The compound is guarded by a large number of Administration Police and an AP lorry is parked in the driveway.

– He is taken to a basement with yellow walls and introduced to Chris Obure and shown “fake Gold”.

– Mr. Zandi is taken to an office block under construction at the cargo area and sees boxes of both fake and real gold.

– Present in the room are:

– Mr. Viktor insists that the plane cannot fly out of JKIA. An argument ensues and the two part ways. 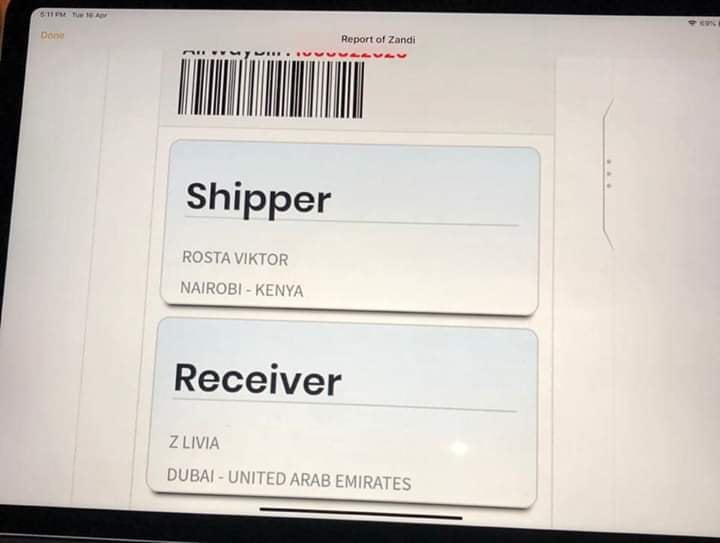 – The next day at Weston hotel, Mr. Viktor informs Mr. Zandi that his mistake was hiring a foreign plane when he should have hired a local one and convinces Mr. ‘Zandi that chartering a local flight will bring less attention.

Plane is paid for $100,000
Handler – Flight Assist (picture attached)
Plane scheduled for departure at 5:50am from JKIA

M. Zandi goes to the airport at 23:30 and are denied entry into the cargo area

Mr. Matiangi calls and informs that he has special forces surrounding the plane. This was done to protect the goods that were under threat of theft by Mr. Viktor of the UN.

– Printed in local newspapers (Nairobi Star and Standard Newspaper, photo attached). The story breaks about the gold scandal. Zandi meets Wetangula in town and is informed that since the story has broken, he needs to leave the country immediately for his own safety.

Zandi charters a helicopter to Kisumu and a private jet meets him to fly him to Dubai. 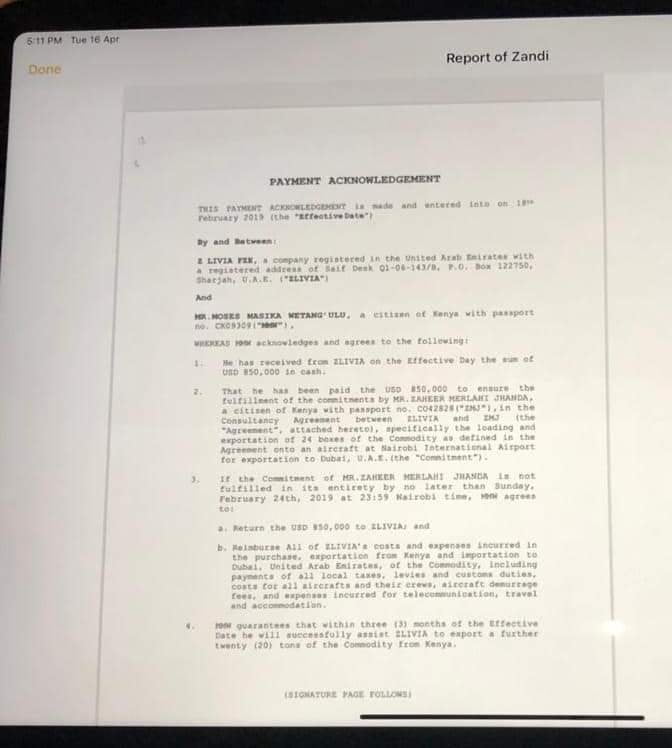