We have obtained exclusive audit reports trailing how Edward Marienga,  the Executive Director at Family Health Options Kenya (FHOK) siphoned millions of funds and properties from the institution.

Edward Marienga admitted that him together with his lootenant the FHOK’s Director of Finance and Administration (DFA) have been receiving kickbacks from the institution’s suppliers.

“The ED informed us that they normally receive gifts from suppliers in the form of additional items (i.e., free gifts) or 10% of the contract amount in cash. The DFA informed us that he received a token of appreciation from a supplier when they received payment for a consignment of commodities purchased from them,” the audit report in our possession notes in part.

According to the audit report, in the period from January 1, 2017 to April 30, 2020, one supplier was paid Sh7,554,275 for the supply of commodities, including contraceptives, which were never delivered.
According to A&K Forensics Investigators report, on March 18, 2019, FHOK under Edward Marienga made a payment of Ksh1 million to the supplier through two instalments of Ksh500,000 each.
When it raised suspicion,  the hotair supplier made a refund of Ksh900,000 in cash to the FHOK Procurement Officer.
The Procurement officer stated that a balance of Ksh100,000 was retained by the supplier to cover bank charges.

“It appears the Procurement Officer utilised the Ksh900,000 to procure contraceptives from Accord (Ksh315,060) and Mission for Essential Drugs & Supplies (MEDS) (Ksh584,413). We obtained additional evidence showing that the supplier may have made additional cash payments to the DFA and the ED. The ED informed us that he received money from suppliers who typically gave 10 percent of the value of purchases made either in cash or additional items. He further informed us that the DFA may have received Ksh700,000 from one of the suppliers in July of 2019,” added the report. 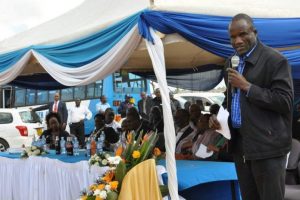 FHOK Exucutive Director Edward Marienga, He has been accused of fleeing the institution million in a through insider procurement scam

FHOK’s Edward Marienga is also listed as a Managing Director in the Motivate Café company registry.

The audit report indicate that Edward Marienga authorized, between January 1, 2016 to 31 December 2019, Sh10 million pay to Motivate Café from FHOK accounts for the supply of various items, including medical imaging machines and IT equipment.

“We established that Motivate Café, a social enterprise sponsored by IPPF-Sri Lanka, was irregularly registered under the names of three FHOK employees who included the ED and the DFA. The Procurement Officer further informed us that he was requested to acknowledge receipt of the same by the DFA to facilitate the payments to a supplier,” added the report.

FHOK has a fleet of vehicles but between January 1, 2018 to April 30, 2020, Edward Marienga and DFA paid a taxi company a total of Ksh5.3 million for taxi services.

As if that’s a joke, Marienga also received an irreg

ular advance amounting to Ksh7.5 million from the FHOK Equity bank account, according to the report.

“This advance was not authorised by the Board contrary to the stipulated procedures in the FHOK HR policy. In addition to the Ksh 7.5 million, a further Ksh0.5 million was transferred from the FHOK Equity bank account on 9 February 2017 and deposited into the DFA’s personal account. The DFA informed us that he later deposited the money into the ED’s account and provided a deposit slip to evidence the same. The DFA informed us that this amount was never accounted for although the ED had informed him that it was for a project visit,” added the report which revealed that Marienga had only repaid Ksh1 million.

In the the Global Gag Rule (GGR) project, FHOK received Ksh15.4 million from IPPF, but about Ksh8.5 million was not transferred into the GGR project account. Also, Ksh573,760 was spent on non project-related activities.

It was also discovered that out of the purported 13 attendees of the ‘Visit to the Homa Bay First Lady’ event under the Danish Family Planning Association (DFPA) project were fictitious. The total amount charged to the project for this mission was Ksh195,000.

During the coronavirus (Covid-19) pandemic, Marienga authorised a payout of Ksh1.29 million worth of allowances to about 12 employees in April and May 2020. However, the allowances are irregular because some of the recipients had transport allowances paid every month.

FHOK staffs that were not bending over for Marienga are said to transfered immediately as a way of punishing them for not following his instructions.

In 2019, FHOK baught a land in Malindi without conducting any due diligence or valuation of the land neither does it have a title deed for the land.

Marienga was suspended in June this year, however, Cnyakundi.com can authoritatively reveal that he has been running secret meetings with the board.

“The whole of July we had strategic meetings supported by Marienga to disorganise the investigations, month of August was the peak we could meet in town and plan the best move. All along Marienga did not inform us the truth about the allegations unfortunately we believed him. The board was split between those supporting him and those against, Marienga incited us to fight the process used to initiate the investigations. He never told us the nature of the allegations,” one of the board members who sought anonymity told the Chief editor of this site.