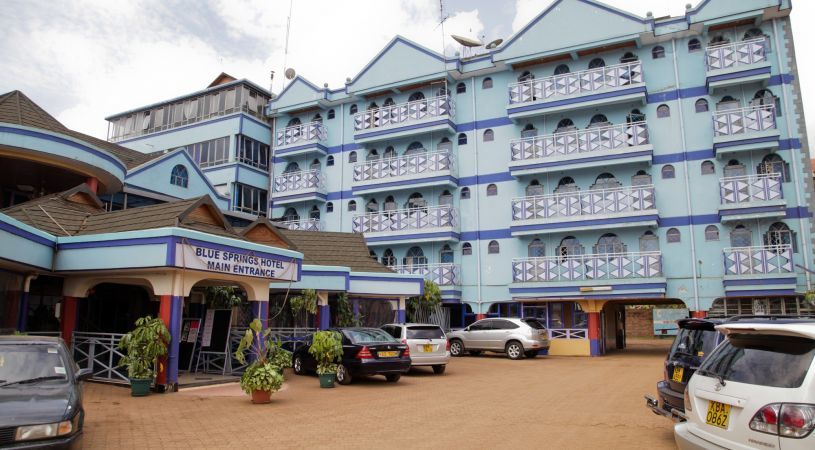 It was a normal weekend when a strange thing happened at Blue Springs Hotel just opposite Garden City Mall.

It was quite, professional and swift. It looked like a James Bond Movie, only that it was Kenya’s great men and women from the Anti – terrorism Police Unit (ATPU) at work.

The ATPU is a unit within Kenya’s National Police Service mandated to mitigate terrorism related cases in the country.

And boy, they have mitigated many that go silent. The media doesn’t report because of the sensitivity of the matter.

However, cnyakundi.com congratulates our valiant men and women.

The lorry was released after police confirmed that it was licensed to carry explosives.

The Happenings At Blue Springs

Undercover Police who had infiltrated the gang gave them up on Saturday between 12 p.m. and 1 p.m. She had ensured that they carried no explosive lest they blew up the place when they knew their cover had been blown.

Police from the ATPU, came in as normal customers, everybody acted normally including the guards at the hotel, the managers and the waiters. Meanwhile, revelers were eating their meals without any worry.

Were it carried any other way, the plan would have backfired and who know what next.

Serving customers went on even as the arrests began. It was quiet.

Away from prying eyes of the public, a man of Somali origin was pinned down.

‘Where is the car?’the angry police shouted as he pointed his clocked pistol at the man’s head.

Immediately without warning, a man , possibly a terrorist run quickly out of the Blue Springs hotel.

The cop fired two rounds in the air, the man stopped and was arrested by other officers.

The one who was held down now knew that the pistol had some live rounds and decided to give away the car they had traveled in.

When the police opened the car boot, they unmasked a heavy machine gun with lots of rounds of ammunition.

Whispers from those in the know sated that the police had foiled a terror attack possibly planned for 16th June, 2019, Father’s Day at Garden City Mall.

The police then forcefully put the terror suspects into a waiting unmarked police car.

This is where some people started piecing what had happened together because the police were very stern and were signalling to private cars to park on the site. This was a serious business.

The next day, Garden City was full of people celebrating Father’s Day without much care.

The Kenya Police, elite Unit of well-trained men and women at the ATPU had once again saved the day.

Thanks to the cooperation of everyone at the Blue Spirngs Hotel opposite Garden City Mall.