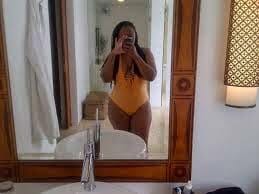 The internet has been set ablaze by a crazy video of pop-singer, Madonna, almost biting Drake’s lips as she was trying to give him a mouth-watering kiss during a recent performance. See it below just in-case you missed it.
The LINK>>>>>
And after the video went viral, former Classic FM’s presenter, Ciku Muiruri, decided to expose how she found herself in a similar situation to that of Drake over the weekend.
According to the former radio queen, she was just having fun with her friends when a man called Eric Njau, who is the Chief Executive Officer of a company named, IQ Plus, forcibly kissed her.
Ciku terms this as s3xual harassment and she now wants Eric’s wife to know that her husband is a s3x hungry beast who goes around kissing women. Here’s what she posted on social media about the awful experience she went through.
Internet ablaze with images of Madonna accosting poor Drake. Same thing happened to me this weekend. A group of us at a table, I look up to say hello to a guy whose just checked in and he proceeds to give me the most disgusting Madonna style smack right on my lips.
It did not last as long as this but my expression was worse than Drake’s. I had to go rinse my mouth out. Gross. Gross. Gross. And he had the nerve to say: “When the opportunity presents itself….” Eric Njau of IQ Plus – Shame on you! Shenzi type! I hope your wife sees this post and kicks your fat ass to the curb. Oh, I feel ya, Drake.
The LINK>>>>
The Kenyan DAILY POST
Would you like to get published on this Popular Blog? You can now email Cyprian Nyakundi any breaking news, Exposes, story ideas, human interest articles or interesting videos on: [email protected] Videos and pictures can be sent to +254 710 280 973 on WhatsApp, Signal and Telegram.