This is an issue with the infamous equity bank.

After recently exposing the garissa branch manager with fraud, here comes another case.

The undisclosed client of the infamous bank have fallen prey to the inside cartels ruining peoples life as the management and CBK keep a low profile on these matters.

The garissa manager Stephen Kirin’s macharia is still free and the individuals involved are still at large even after the client who lost 400k in garissa was refunded his money after public outcry through social media support.

After the said client withdrew 22k from Eastleigh branch, the balance left was withdrawn within the following two days through a visa card without the owner’s approval or consent.

“I raised the issue in westlands branch and also went to eastleigh for the same case and they all gave me a form to fill in for security follow up” laments the client.

Firstly, the client was never issued with a visa card and how did someone get to have a visa card of the client account to be able to do the transactions as shown in the attached statement of account?

And if its the kamiti goons, how did they have the account’s information to be able to such.

Unless the bank is hiding something, then there are so many stephen Kirumbas’ in the institution who need to be counter checked for their dealings.

Kindly check your bank statements regularly to safeguard your money.

But why equity bank is always on the wrong? 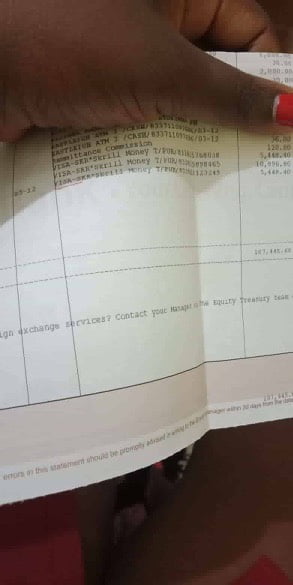