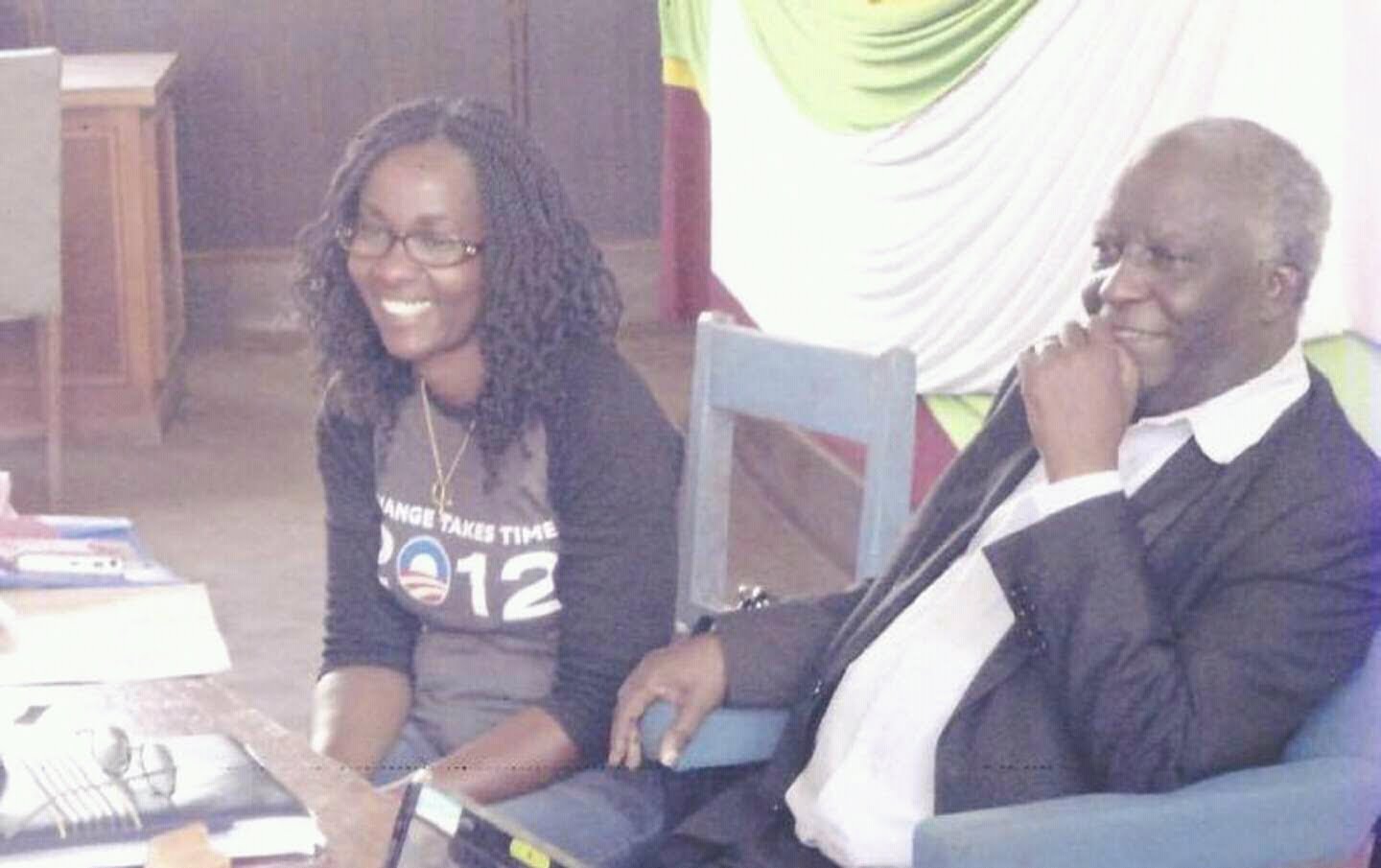 CAPTION: Nyokabi Kamotho with her late father JJ Kamotho. He was the person behind the attempted grabbing of Karura Forest, prompting Wangari Maathai to action.

A case where daughter of the late KANU bootlicker Joseph Kamotho was involved, has finally attracted the attention of Director of Public Prosecutions Keriako Tobiko.

Nyokabi Kamotho had sought the indulgence of President Uhuru Kenyatta’s Private Secretary Jomo Gecaga, in a bid to intimidate constitutional office holders and lands officers, into grabbing a parcel of land in Thika.

Jomo Gecaga has been spotted socially together with Nyokabi, fuelling speculation that the two are having a sexual relation. Infact, Nyokabi and her brother Digo Kamotho were invited to Statehouse on 12th December 2016 for the Jamuhuri Day Celebrations, courtesy of Jomo Gecaga.

Using her vagina as leverage, Nyokabi had coerced Jomo to prevail upon Ndegwa Muhoro to create a scenario which would have made it easier for her agents to grab the said parcel of land.

Ironically, Nyokabi has been sharing an online petition against the grabbing of land owned by the family of Dmitry Gwandho, an Army Major, yet she herself is doing the same to others. The hypocrisy is nauseating. 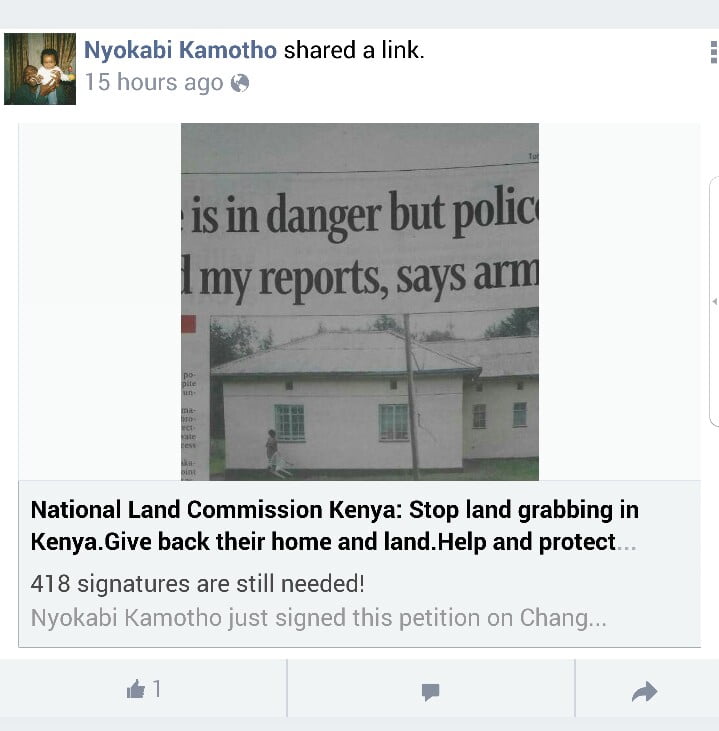 CAPTION: Nyokabi Kamotho’s Facebook page has a petition against grabbing, yet she herself is a big land grabber.

The Thika DCIO who seemed to have been a stumbling block in the criminal investigations, in which he was said to be “eating” from Nyokabi’s bowl.

On his part, Jomo Gecaga is suddenly denying invoking Uhuru’s name to assist Nyokabi in the matter, claiming through a proxy that she might have just been using his name for her own gain. But we know better.

It seems like it’s the end of the road for the Thika DCIO as Keriako Tobiko has written directly to Ndegwa Muhoro over the matter, signalling that the Thika DCIO has been removed from the case. Speculation is rife that the same DCIO together with his agents handling the matter, will be transferred to hardship areas like Mandera, for disciplinary measures, like the former OCPD of Embakasi, who colluded with Kiprono Kittony, to attempt the grabbing of a parcel of land on Mombasa Road.

CID officers have become notorious in matters pertaining land, colluding with grabbers and creating the current stalemate we are witnessing today, where impunious grabbers are literally walking around and forcefully acquiring land from weak families.

We now call upon Ndegwa Muhoro to immediately transfer all CID officers at the Thika Police Station, to avert any similar occurrences. The letter from the ODPP clearly shows that there has been underhand tactics executed by those officers in delaying to communicate.

The office of the Director of Public Prosecutions is a constitutional office, and junior officers cannot purport to defy it, simply because someone working in Statehouse, without any constitutional mandate, called to issue instructions.

Jomo Gecaga’s title of Private Secretary is not in the constitution, and he has no legal powers to compel or interfere with the work of people who have been appointed in accordance with the Constitution. He should stop sleeping/soliciting for sex with women and promising favours he cannot keep. Nyokabi should also use her brains and not her vagina for advancement.

Everyone in the country is complaining about Jomo Gecaga. Who the hell does he think he is? 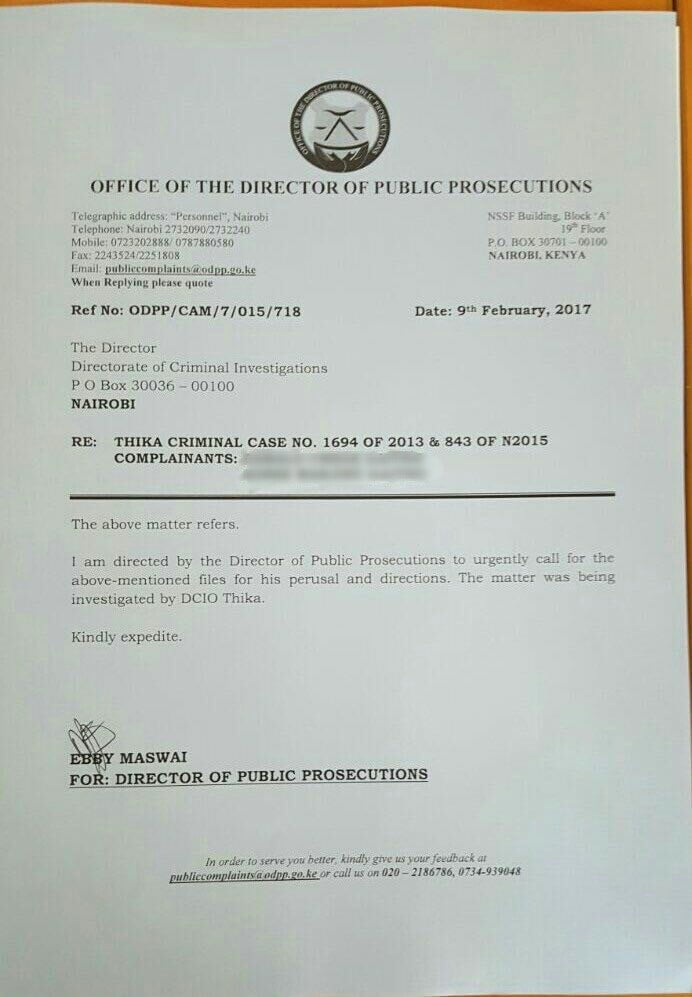 CAPTION: Follow-up letter to Ndegwa Muhoro.
Would you like to get published on this Popular Blog? You can now email Cyprian Nyakundi any breaking news, Exposes, story ideas, human interest articles or interesting videos on: [email protected] Videos and pictures can be sent to +254 710 280 973 on WhatsApp, Signal and Telegram.