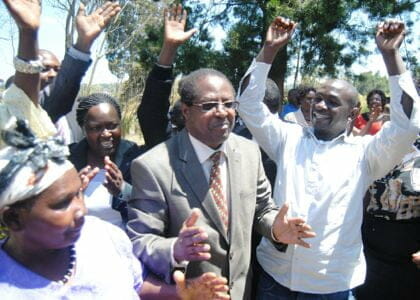 Following an aborted planned State House meeting which was slated for January 20 2015 by church leaders and politicians from Embu county, we have information that attempts are now being made to have the visit rescheduled.
The planned visit unlike the first one that generated a lot of political friction will all be inclusive. It will involve all the warring parties.
The visit is being arranged as leaflets are being circulated in the area fueling the Embu-Mbeere political differences. The leaflets claim one of the communities is to rule for 100 years.
Mainstream churches from the county have however expressed disappointment over the cancelled meeting in which they say could have been used to iron out differences among political leaders.
Some politicians together with leaders of the National Churches of Kenya affiliated churches are now pressing buttons to reschedule the meeting.
The man pushing for the meeting is the NCCK chairman Embu branch Moses Mashamba who is the ACK bishop for Mbeere Diocese. Mashamba is being whispered to have been part of the team that accompanied Governor Martin Wambora to a meeting with Uhuru Kenyatta at his Harambee House office.
The Harambee House meeting was also attended by Catholic head church John Njue and Embu ACK Bishop David Muriithi among other church leaders.
Sources say church leaders have failed to reconcile the politicians hence need to have the matter solved before Uhuru. Sources say among those expected to attend the State House meeting are Speaker Justin Muturi, Senator Lenny Kivuti, Embu MPs, bishops and all retired civil servants from the county.
The clergy from Embu are not happy that the power struggle has slowed down development in the county as problems such as unemployment, insecurity and water continue to bite hard. They claim that it is worrying that Embu women continue to walk long distances to fetch water using donkeys while county hospitals lack essential drugs whereas money remains unspent due to political power struggle between the governor and other leaders.
The bishops are now warning the politicians to end the wrangles and deliver services to the people of Embu as they promised during the run up to the 2013 elections.