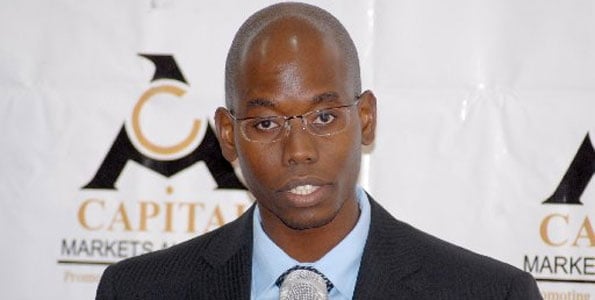 For a Long time, This Community Site has Questioned Incompetence and Impunity at the Capital Markets Authority ( CMA ).

We Raised the Red Flag When Muthaura’s Son was Made the CEO of Capital Markets Authority But Nobody Seems to Listen. Kenya is one Toxic Jungle where people get Jobs based on Political Connections, Family Ties, Bribery or how Far Some Woman Can Spread her Legs.

It is time for Kenyans to start demanding for Merit instead of mediocrity. For instance when Banks Collapse it is the Middle Class that suffers.

Just because some Wankers like Muthaura’s Son Can bribe Low Self Esteem Journos to Praise them doesn’t mean that everything is Ok. Some of these Pieces of Shit that the media Praises turn out to be the Biggest Crooks Kenya has ever had.

Read the Email from the CMA Employee.

Dear Cyprian,
I came across an extract you wrote as regards the CMA Kenya. Here under is more information on CMA. I am a CMA employee and  I cannot reveal my identity to you.

I am an insider in CMA and if is with concern and dismay that I have watched the senior management at CMA ruin the organization through unfairness, oppression of competent staff, backstabbing etc..

First of all, the organization is wrought with favoritism, incompetence and unfairness; aspects that have led to the loss of very competent staff.

Here under is a lowdown on some of these managers.

Andrew Muthabuku– Andrew’s meanness really leads to question marks as to whether he is a HR manager; he seems to attain a certain amount of joy from people’s suffering. He had a tumultuous relationship with an officer and this led to him orchestrating a campaign against him and leading to a disciplinary committee being constituted and the officer being dismissed on flimsy grounds.

Johnstone Oltetia-This manager who was rumored to be very friendly with Stella epitomizes incompetence and favoritism at the Authority. He has frustrated several competent officers leading to their exit and/or frustration and dwindling of career prospects. He favors an incompetent, unintelligent and malicious officer known as Evelyn Mbithi to the dismay of the the MS team. He is known to be temperamental and uses this to cover for his incompetence. He always favors certain people for trainings while others are left to languish in neglect and mistreatment meted out by him. He led the plot to have Evelyn get the assistant manager risk and compliance job despite her glaring inadequacies; hence having the job internally advertised.

A competent lady who was in legal framework, left CMA in a huff (and went to CBK) because when the job for Assistant manager legal framework was advertised and she applied, her application miraculously disappeared. She was devastated and she left heart broken. The job was given to a man who is a favorite of the CE , Paul Muthaura, thus begging the question whether he influenced this appointment.

The directors like Mr. Wycliffe Shamiah and even the CEO know about this but they let these rogue managers run roughshod on us.