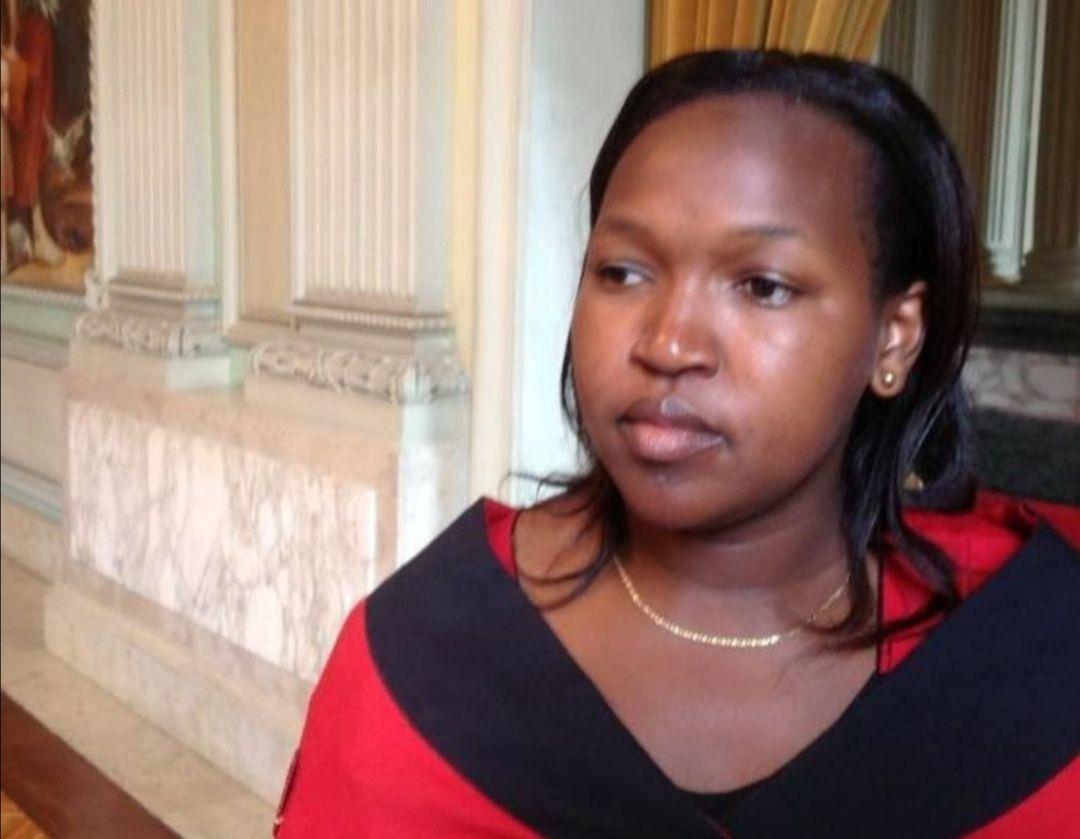 Elizabeth Lolchoki is not your average lady, she is the tough County Secretary for County 033, that is Narok County where the Governor is Samule Kuntai ole Tunai.

The 51-year-old governor as stated in earlier articles is not a poor man, but what is shocking is his hands doesn’t tire from ripping off the poor masses of Narok.

In this article, we expose his aide that hides all his loot, Ms Elizabeth Lolchoki.

Elizabeth came from a humble work background as a cashier at KCB Bank group to rise to the powerful position of the county secretary for Narok under Governor Tunai.

First appointed in 2017, she has been in an acting capacity but her power is immense to have the governor listen to what this former banker says without question.

Sources at the county say her word is like law.

‘The Governor trusts this lady with his life’, said a source.

Now Tunai who owns large tracts of land in the county, owns hotels in Maasai Mara, Tanzania and South Africa, where most of the monies are hidden has other ventures here in Kenya that have now come to the limelight of cnyakundi.com.

However, when enough has been hidden in these business ventures, where else does the other monies go?

In an earlier article, the looters of Narok county often construct buildings, and purchase livestock to hide the money stolen from county coffers. 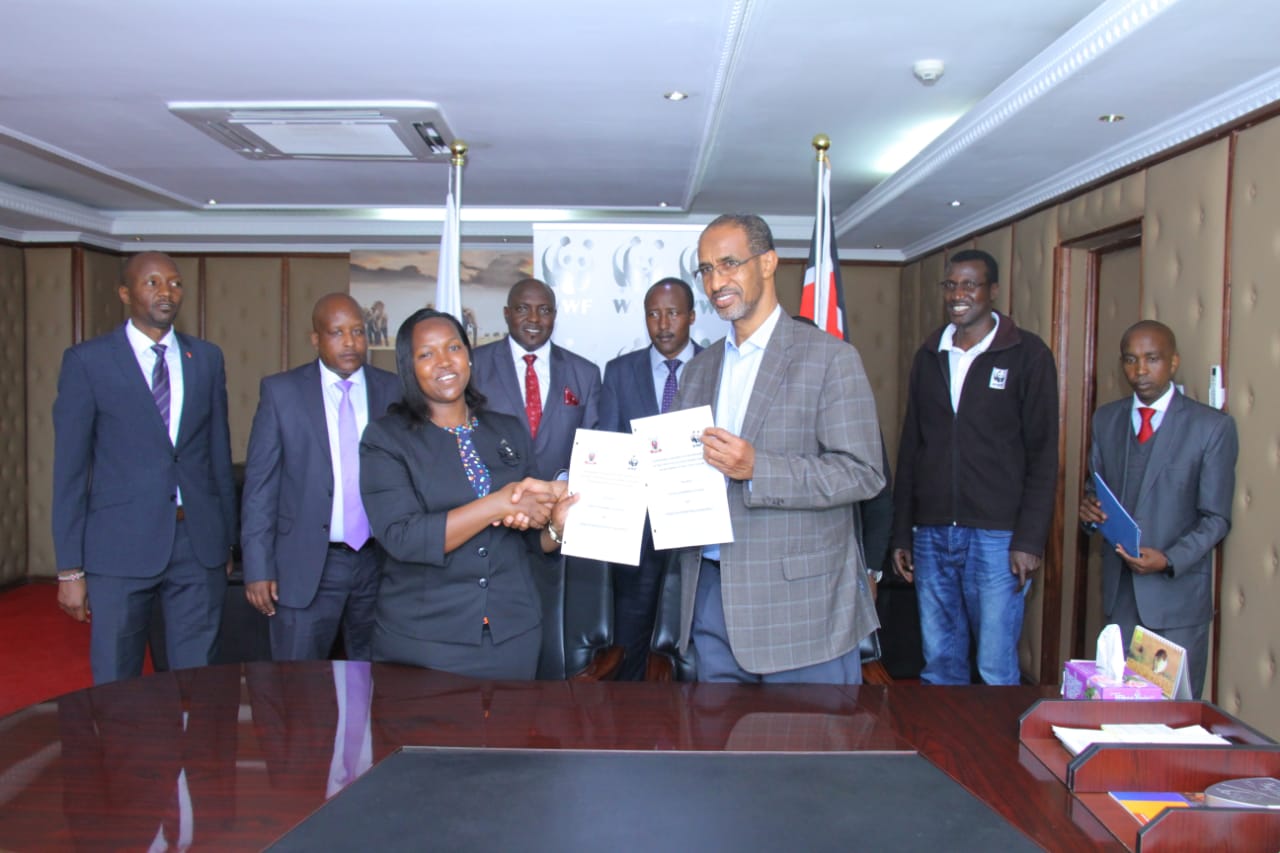 November 2018: Ms Elizabeth Lolchoki signs a memorandum of understanding with WWF on the finalisation of the county spatial plan

Being a former banker and obviously conversant with anti-money laundering (AML) laws, Ms Lolchoki is a cunning fox to the authorities and an asset to ole Tunai.

She owns apartments in Ngong Town of neighboring Kajiado County on behalf of the Governor. The apartments are registered in her name.

After she left KCB Bank, she worked as a mere officer at Governor Tunai’s office in Nairobi. With a keen eye for details and ambitions to escape poverty, the lady soon found her way into the heart of the governor.

She is so powerful now that it is said that she was the one who had two powerful finance guys demoted from Tunai’s cabinet in late December 2019.

Moreso, there’s one more thing about girl-boy relationship; even if it is for work, they tend to metamorphose into intimate encounters.

Whispers say the power that Ms Lolchoki wields comes from her accepting other watery gifts from the governor.

A divorce lawyer whispered in my years many years ago that once a woman sees your nakedness, then she will rule you. 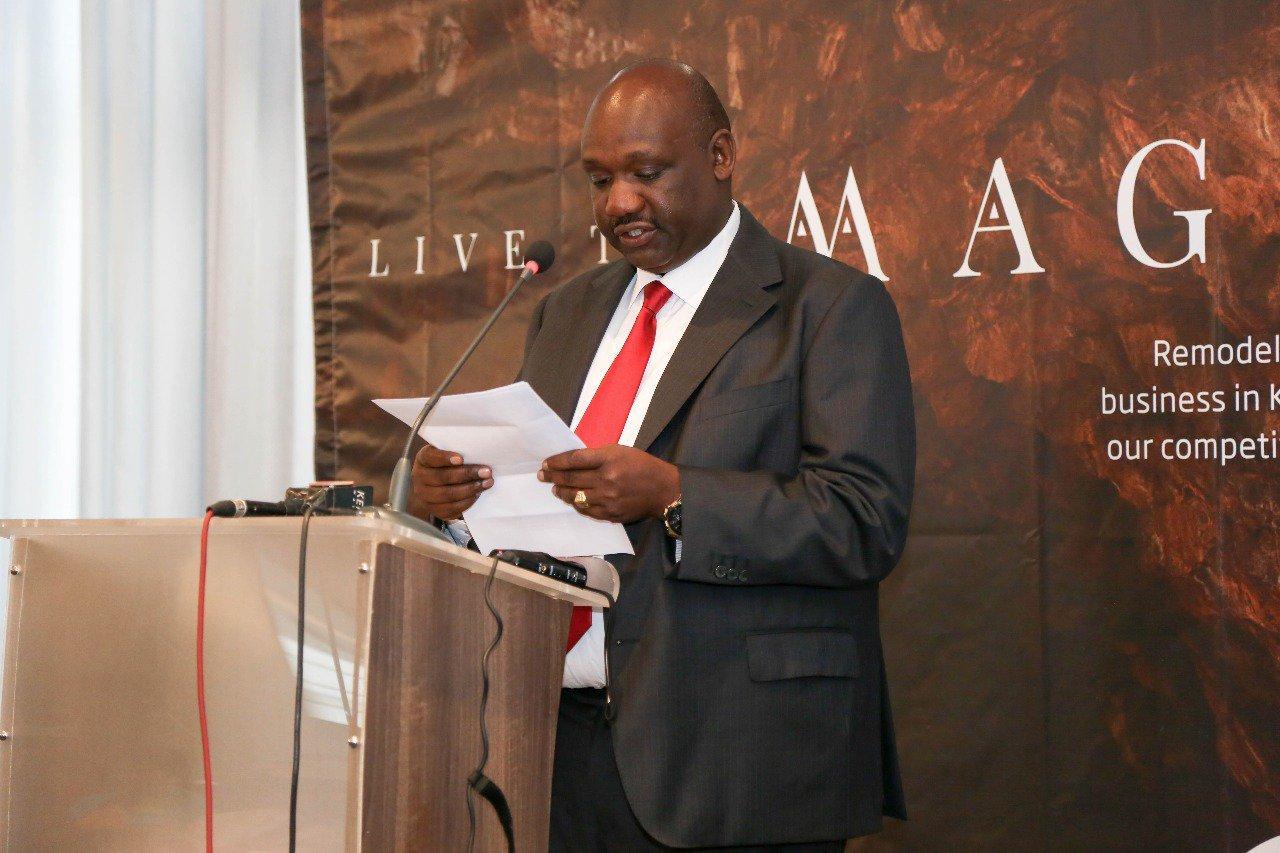 Governor Samuel Ole Tunai is a very rich man yet that doesn’t stop him from dipping his hands on the cookie jar.

In fact the Ethics and Anti-Corruption Commission’s (EACC) corruption index has spared the county more than once. Though it is among the top 10 in corruption, Narok county can easily play in the big leagues of corruption and dislodge the North Eastern counties and Nairobi.

It is public knowledge, though not popular that the man owns large tracts of land in the Maasai Mara park ecosystem. His land is full of animals too, just like the neighboring national park.

However, what is so curious about the whole thing is that instead of getting satisfied with what he owns, the man has taken to run the whole thing like his family business, where he pockets huge amounts of money and uses it like his personal bank account.

It should not be lost on Kenyans that the world’s famous park is within Narok County is also one of the richest.

A source in Narok informs us that the Mara revenue doesn’t show on the ground.

For a park that charges Ksh10,000 per night as entry fee. Just imagine the number of tourists that come over to the park each month, each year.

“It is a eating frenzy here. In a period of let’s say 3 months, one can walk away Ksh40 Million rich. One doesn’t need to be a highly placed worker. Just in the right position”, our source said.

A person cnyakundi.com spoke to said that most of these workers leave after three months having made millions then invest the money in buildings in and around Narok Town.

The money has even found its way to Nairobi where the former staff of Maasai Mara buy rental flats, invest in hotels and other businesses.

‘The money that is mostly stolen by (Governor) Tunai is spent on building, hotels here in Kenya and South Africa. Some of it is also used to purchase livestock, mostly cows”, the source added.

There are also numerous proxy forms that the governor and his men use to hide the loot.

Governor Tunai has been a DP Ruto person since 2013 up to 2017. But that changed after 2017. Wherever he takes the money to these days might be higher.

“The best lodging in mara is his. Oh, I almost forgot, he also invests in hotels in Tanzania”, the source concludes.

In 2013, it was revealed that the Narok Governor Samuel Tunai owned a 2,359.6 acres of land most of which borders the famous Maasai Mara Game Reserve.

Tunai who is rich has also stolen massively from the county. The governor who is on his second term is said to be planning to run as a Member of National Assembly for Kilgoris. A move which a section of residents has vowed to block vehemently due to his underdevelopment and corruption records.

In Tunai’s 2.359.6 acres of land, a small settlement had formed but was burned down in 2003 in the deep of the night. 300 families were left homeless.

In 2015, Governor Tunai refused to declare the total amount it collects from the Masai Mara Game Reserve before the Senate.

At that time, Tunai has given the revenue collection contract irregularly to KAPS — an electronic ticketing firm that offers car parking payment solutions, access control and revenue management systems.
This scandal was never successfully prosecuted.

However, though the Governor said that he doesn’t know how much is collected, the firm KAPS have a figure of Ksh1.097 billion in a period of 11 months.

Governor Tunai denied the above claims.

Reports indicate that the corrupt Tunai is living in fear as EACC, DCI, DPP are keen on rekindling their investigations. 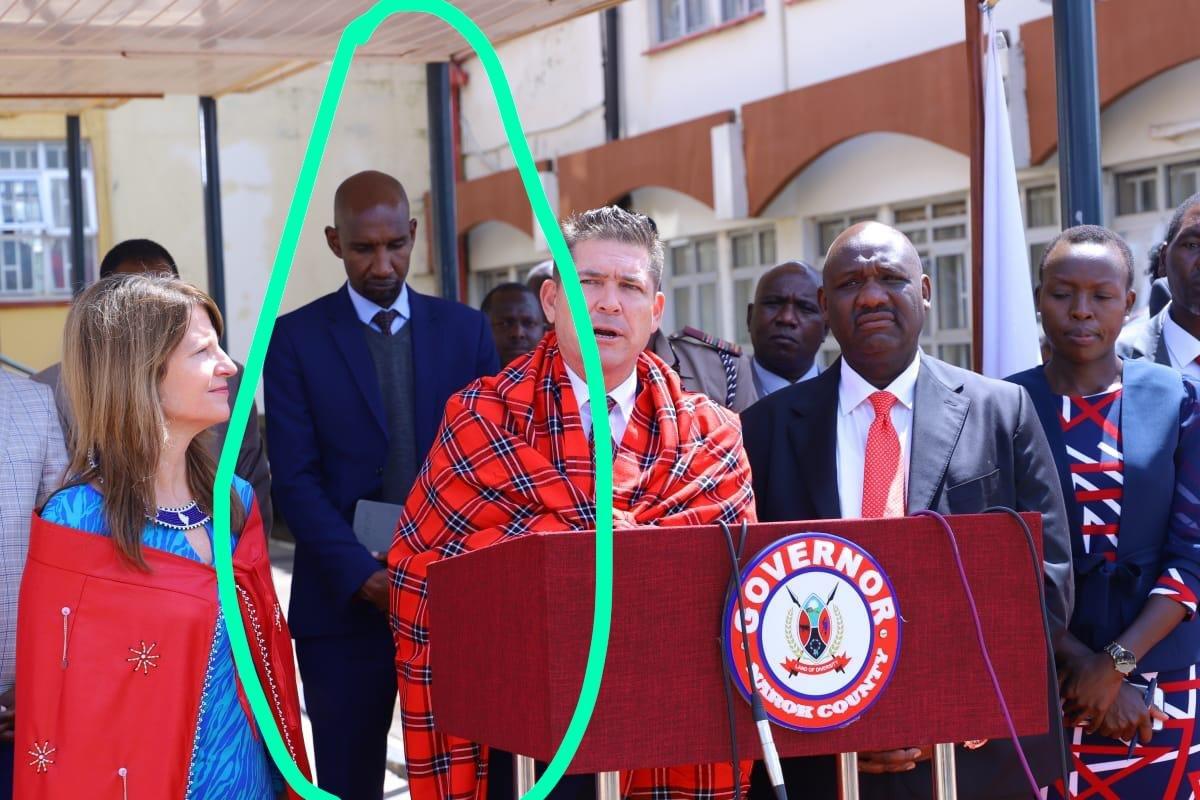 Man of the shadows: Fred Ntekerei (circled) behind US Ambassador Kyle McCarter. Gov Tunai is to the right of the Ambassador

His other aide in looting

This is a series documenting the corruption of one of the most untouchable governors in Kenya.

Narok County Governor Samuel Ole Tunai’s network of deceit, corruption and money laundering goes deep and in this article, you’ll learn how money moves from one person to the next and ultimately how the monies are shared and concealed in plain sight.

The EACC has been lax in untangling this intricate criminal network in Narok. Even the most celebrated former Auditor General Edward Ouko missed this. But did he?

As stated in an earlier post, Governor Tunai is a very rich man but one who has not hesitated to continue enriching himself using the county coffers.

Governor Tunai’s kickbacks and stolen money is handled by his Chief of Staff Fred Ntekerei. The CEC’s some of whom are his relatives are good at the game of enriching the family. Running the county like a family business where they mostly enrich themselves without care for the Narok citizens.

Narok county CEC’s, CO’s and Directors are just departmental puppets, whose work is just to spearhead programs, prepare and sign governor’s loot. They only rely on a measly Ksh.500,000 monthly department operation fund. They are very broke. Narok County MCA’s will pass any law/Bill just to be Paid by the Governor 20k with a fuel of 5k.

One thing is certain, those close to Gov Tunai are rich because they are the only one who matters according to sources. These are Fred Ntekerei, Elizabeth Lolchoki, and the Governor.

After an article on cnyakundi.com revealed how the anti-corruption body is preparing imminent arrests of key people in Narok County government for stealing of funds, the governor has ‘reached out’ to try to cover for his men since he knows that if they are arrested, he will be too.

Going by the recent events where the elected governor for Kiambu Ferdinand Waititu has been successfully impeached, things are hot in Narok.

A source confirms that the Governor and his inner circle are running helter-skelter trying to cover their crimes.

Sources intimate that Mr. Tunai owns more than five Luxury Lodges in the Maasai Mara Ecosystem, which are not listed in the controller of budget reports as paying park entry fees. These luxury lodges charges on the lowest $80 (sh8000) per person per day.

There is also a brewing helicopter hiring scandal that the Ethics and Anti-Corruption Commission is working on with plans to question some officials that are using it as a cash-cow.

Money that is stolen from the county is invested in the construction of new buildings, buying luxury hotels in Tanzania and South Africa, hidden in luxury hotels accounts that the governor owns in the Maasai Mara.

Most of the revenue collected at the Maasai Mara does not show on the ground as it disappears into thin air.

A source stated that many managers at the park only work for a few months and walk away with tens of millions which they invest in purchasing land and livestock.