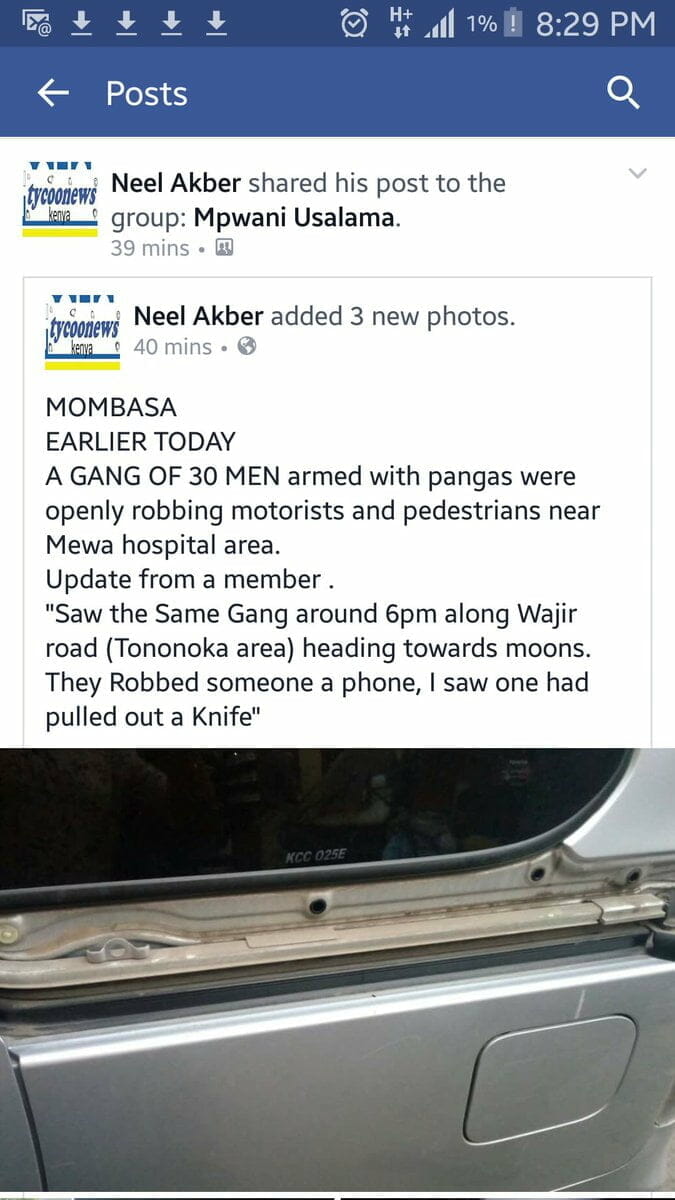 It’s that time of the cycle again. “Foreigners” need to be targetted and eliminated from certain areas for the sake of political-expediency.

Blood-thirsty Kalenjins are probably planning to burn Kikuyu’s in a church again. Kalenjins are the fake “warriors” who are attracted to soft-targets seeking refuge in churches. With the mobile phones and recording devices, I’m sure they will make great viewing, like the guy who hung on Jacob Juma’s chopper.

In Mombasa, the so-called tourist hub of Kenya, gangs wielding panga’s, machete’s and other crude weapons are already terrorising residents in broad daylight. Many in Mombasa think the region should only be inhabited by seperatists and ofcourse tourists.

Mungiki has also resurged in Nyeri and other parts of Central Kenya. They say that Uhuru is their godfather. We recently saw Musician Prezzo in a Mungiki forum trailing their leader. It’s his way of looking “gangster” and “street” to his bourgeois Instagram followers.

Police meanwhile are conveniently missing in action, probably intentionally dispatched elsewhere to allow the marauding gangs achieve their heinous objectives. You will find police extorting alcoblow victims but not stopping the murderous gangs.

All these activities are sponsored by individuals who are simply eyeing money paid as taxes by you and me. In essence, your tax-dollars are financing war-criminals.

And so Kalenjins will cheer Ruto and his fake “warriors” who hit soft targets, Kikuyu’s will cheer Uhuru and his Mungiki clique, while Coasterians will celebrate Joho and his support of MRC and calls for cessation. That’s just how life is.

But one would wonder, why can’t these gangs be rounded up, and dispatched to Syria or Iraq, to aid the coalition forces in the fight against ISIS? Right now there’s an offensive in the Syrian city of Raqqa and the Iraqi city of Falujja, where manpower is desperately needed.

Instead of politicians funding gangs to rob soft targets and burn children in a church, why not contribute the much-needed labour to the international coalition battling terrorists?

The answer is simple; they are cowards. Intimidating peace-loving people is easier than picking on people their own size. In school, the biggest bully always picked on the smallest targets, and used him as an example in a bid to intimidate or fear-monger. Bullies rarely pick on their match.

So dear Kenyans stay safe, and always know that the violence you will witness is a cycle. After 2017 when the psychopaths will be less insecure, it will come back to normal.