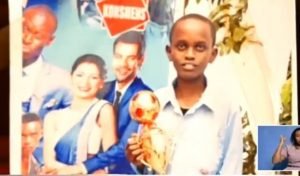 As other parents across the country celebrate their children’s performance in the recently completed KCPE examinations, the family of Edward Nyamu in Uasin Gishu is mourning the death of their son who was involved in a grisly accident after a lorry rammed into their house.

The incident that happened on Sunday took Edward’s life just before his KCPE results were released the following day where he managed to score an impressive 347 marks out of a possible 500.

This is the second incident of a lorry losing control and ramming into a house in less than a week.