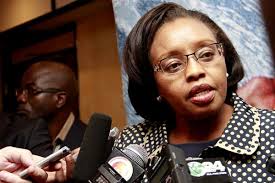 There’s a look of death in Phyllis Kandie’s eyes.  She is now prisoner to her own words – Uttered from her own mouth . Her  confected grin and her repetitive, hollow claims  that were printed in a local daily are now haunting her.

“The government is committed to take up our full entitlement in the rights issue, up to a tune of Sh264 million. I urge all shareholders to take up their rights,” Lol

Phyllis Kandie is now trapped, she knows it, and even hers  sympathetic Kenyan Media  knows it. The Jubilee sycophants  are still in denial phase but they  must soon accept the inevitable. The Kenyan media refused to tell us more about the controversial 50B  Bomas Project where the name of the East African Affairs , commerce and tourism cabinet secretary’s name featured.

The story of the Controversial Bomas project is a sad one. It is alleged Kandie was on a mission to control activities at the tourism fund which is/was constructing headquarters along valley road. Myriad firms among them Ujenzi consultants that engaged in the same felt the heat of powerbrokers .

There was lobbying to remove Tourism fund CEO who those close to power trappings branded a CORD sympathizer .

Tenders calling on investors to partner with the government in a major upgrade of the Bomas of Kenya were  cancelled only 24 days after they were advertised. It is not known why they were cancelled but industry players said  the aim was  to have certain firms win the lucrative project.- Citizen

At one time, the project was rocked by controversies and had to be halted to allow for wider consultations between Kandie’s office and the stakeholders. Trouble for Kandie began when members of the civil society and other Kenyans registered their opposition to the project.- Citizen

To fire the first salvo was the renowned constitutional lawyer Prof Yash Pal Ghai who once wrote to the Bomas general manager asking whether the planned developments had been subjected to public consultation and participation and whether there has been an environmental impact assessment on how biodiversity will be affected.- Citizen

Kandie’s office first put up adverts in the dailies on December 23 2013 through the directorate of Tourism of the ministry of East African Affairs, Commerce and Tourism. The advert called on firms to express their interest to carry out the feasibility study, design, construct and commission the projects.- Citizen

However, on January 16 2014, the Request for Expression of Interest was cancelled through an advertisement in the dailies without giving any reason. It is said the project had too many legal loopholes.

The firms were expected to collect the Expression of Interest document within 60 days from December 23 2013 and be returned not later than February 21 2014 at 1200hours.

Despite the controversy, sources say ground breaking for the Bomas International Convention and Exhibition Centre could take place early this year if an ongoing feasibility study for the project was to be completed in time.

Insiders claimed, those who were  out to make a kill want it started well before the next elections and is part of the scheme to raise money for 2017 polls.

The project is said to have caught the eyes of a number of parliamentary committee. One is the Public Accounts Committee formerly  led by Ababu Namwamba and Public Investment of Adan Keynan. The tourism industry is under the parliamentary committee of Finance, Planning and Trade Committee. It deals with all matters pertaining to public finance, monetary policies, public debt, financial institutions, investment and divestiture policies, pricing policies, banking, insurance, population, revenue policies, planning, national development, trade, tourism promotion and management, commerce and industry. The chairman is Benjamin Lagat and vice-chair is Nelson Gaichuhie (TNA)- Citizen . That was just some basic info about Kandie.

Maybe Kandie  carries the stench of Jubilee’s decomposing  carcasses and, as surely tendepreneuring is how tax payers money is stolen .

Kandie also  tried to give us false hope about Uchumi , but the Kandie  experiment has  failed miserably  because the truth has been known. It is now evident that East African Affairs, Commerce and Tourism Secretary Phyllis Kandie misled the government and the public on the true financial status of Uchumi during the cash call.” Ms Kandie also bought a half-page advertisement in the dailies to urge investors to buy shares saying the government would participate fully in it.

That Uchumi Supermarkets is negotiating with a bank for a Sh500 million overdraft to pay suppliers brought to an end speculation that the retail chain has serious cash flow problems, barely a year after raising cash in the money market.

The big question will now be what happened to the Sh896 million raised through a rights issue and whether East African Affairs, Commerce and Tourism Secretary Phyllis Kandie misled the government and the public on the true financial status of Uchumi during the cash call. – Daily nation

People like Kandie have proven to be flower girls in the Jubilee Government . Just being used like a tissue paper . It is time she tells Kenyans why she lied about the true financial situation of Uchumi and the role she played in the controversial sh 50Bn Bomas Project.