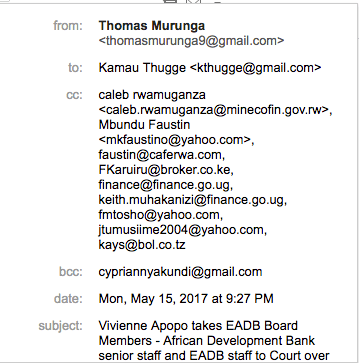 Caption: High-Density Email sent to all these offices and fellas and Copied to Chief Blogger Cyprian Nyakundi.

We continue to be baffled by the board’s silence over the ongoing crisis at EADB. We have written to you several times over the appalling status of affairs at the Bank but we have not seen any response a board that plays an oversight role at the Bank. Despite several incriminating evidence supplied to you previously but also supplied to Ernest & Young Nigeria who you commissioned in November last year and submitted their final report to you in Feb 2017, you have not taken any actions to save the Bank.

We reported recently that Vivienne had failed to manage a case brought against the Bank by Eden International School and as a result, the Bank lost the case. We shared the court ruling with you. by end of March 2017, the same court had issued a garnishee order to attach UGX 423 million from one of the EADB bank accounts to pay for damages and costs for this case.

This amount continues to accrue interest at the rate of 23% p.a until it is paid in full. You are aware of this case. Vivienne has continued to hire several law firms to fight this case but she forgets that if it were not for her arrogant character, the Bank would not be losing all this money, its image, and the goodwill in the Judiciary across the EAC. You are also aware that the Blue Line case in Tanzania has resurrected mainly caused by Vivienne’s inability to manage relationships. The Bank is poised for more difficult times every day you continue leaving Vivienne in office.

She has continued to harass staff members resulting in more senior staff members resigning. Recently the Country Managers for Kenya, Tanzania, and Rwanda left to continued harassment and intimidation by Vivienne. She has failed to recruit Directors not because there are not qualified people in the EAC region but because everyone across the region now knows about Vivienne’s character and they are not willing to come to the Bank as long as she is still around.

Those who will dare will ask for a lot of money, but we can assure you that they will not last even six months. Some of the senior managers continue to work without contracts. for other staff members, she takes about 6 months before renewing their contracts and when she does, she gives them one year when they are already 6 months into this contract. 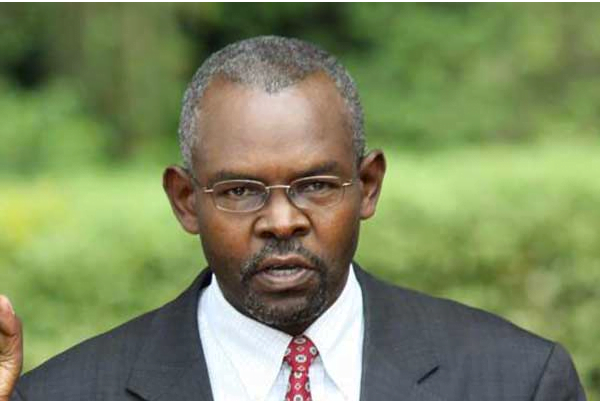 CAPTION: Kamau Thugge, Principal Secretary, Ministry of Finance. He is currently sitting on documents detailing how the Director General of East African Development Bank (EADB) is looting it to the ground.

Vivienne went to court late last year and opened a case of defamation against some staff members, some board members and some staff of African Development bank. As a result, the court instructed Interpol to investigate the case. See attached documents confirming instructions issued to Interpol who Vivienne is also paying to pursue her personal case using Bank money. These security operatives are Musana assisted by Egesa (expoliceman). 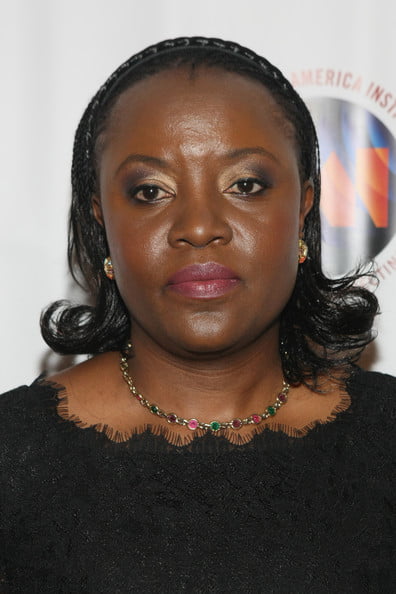 We have in the past told you that staff members had been threatened by security agents to stop reporting Vivienne to the Board otherwise they risk their lives and those of their families. These are security goons who have mentioned to some staff that Interpol has hired them.

We now connect these threats directly to the Interpol agents who have been hired by Vivienne. There have been high rates of assassinations in Uganda allegedly by wrong elements in Police and other security agents for Money. Staff members and their families continue to be at risk if Vivienne is not removed from the Bank. Moreover, she is using Bank money to carry out these personal operations. 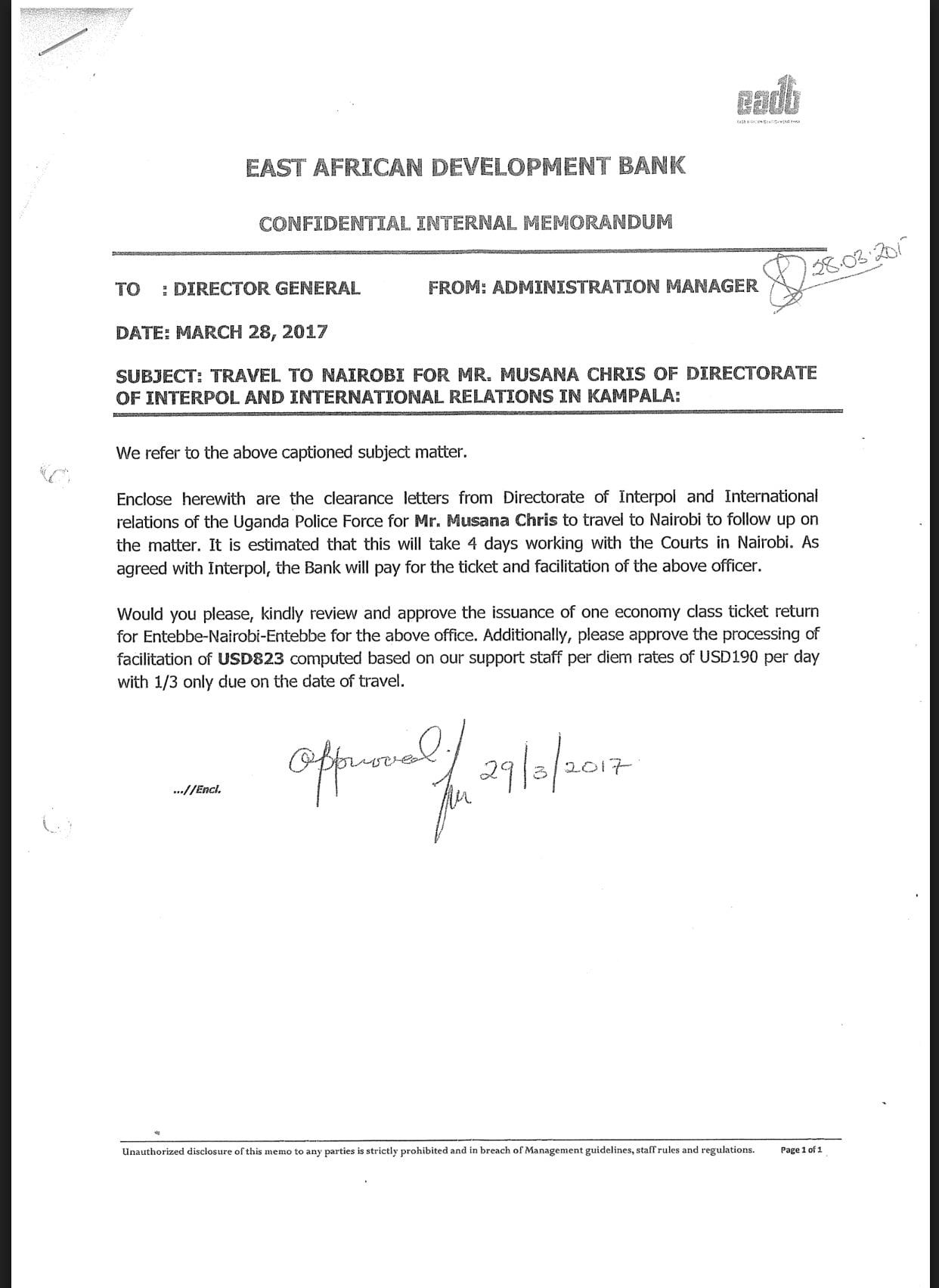 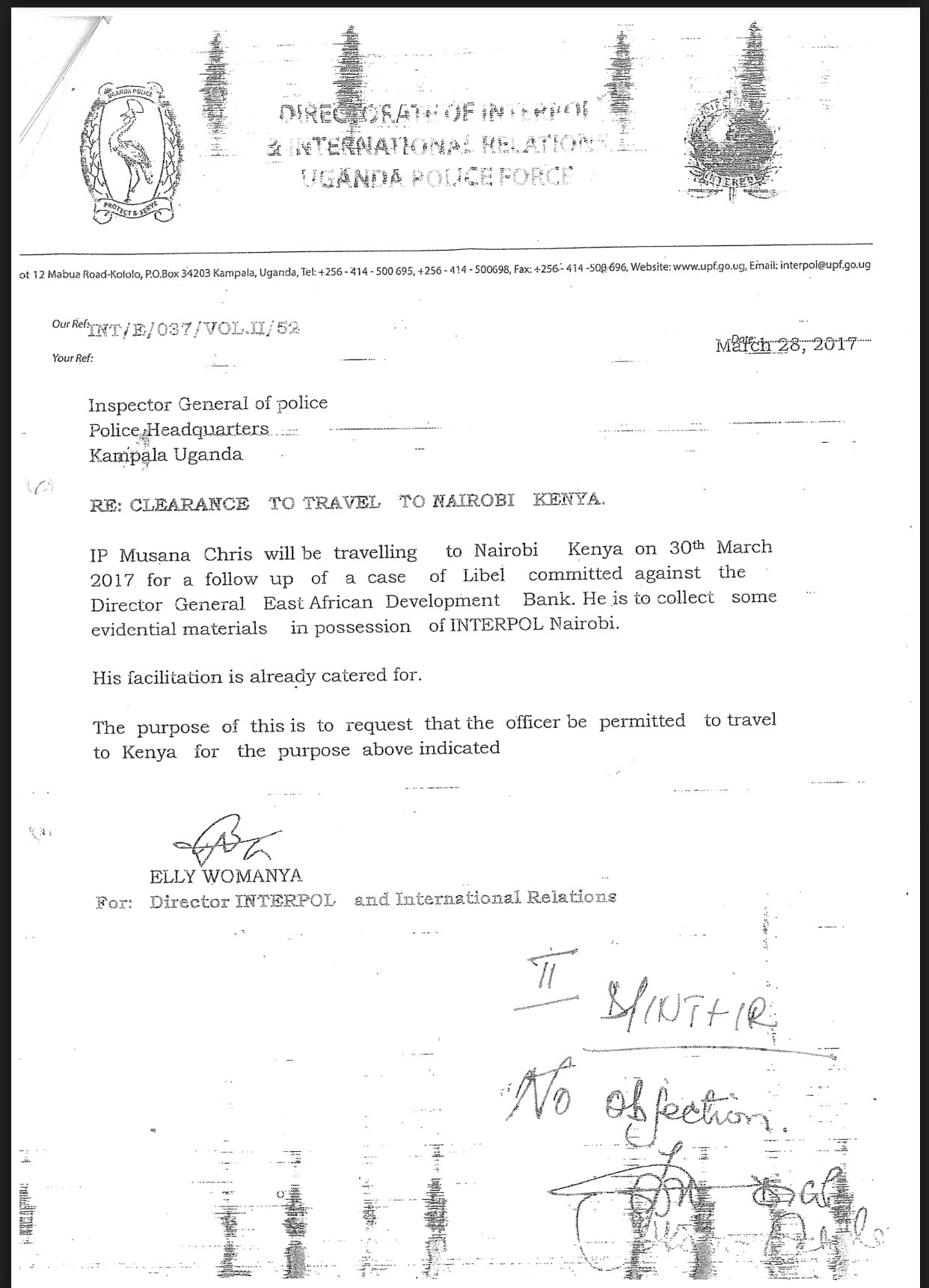 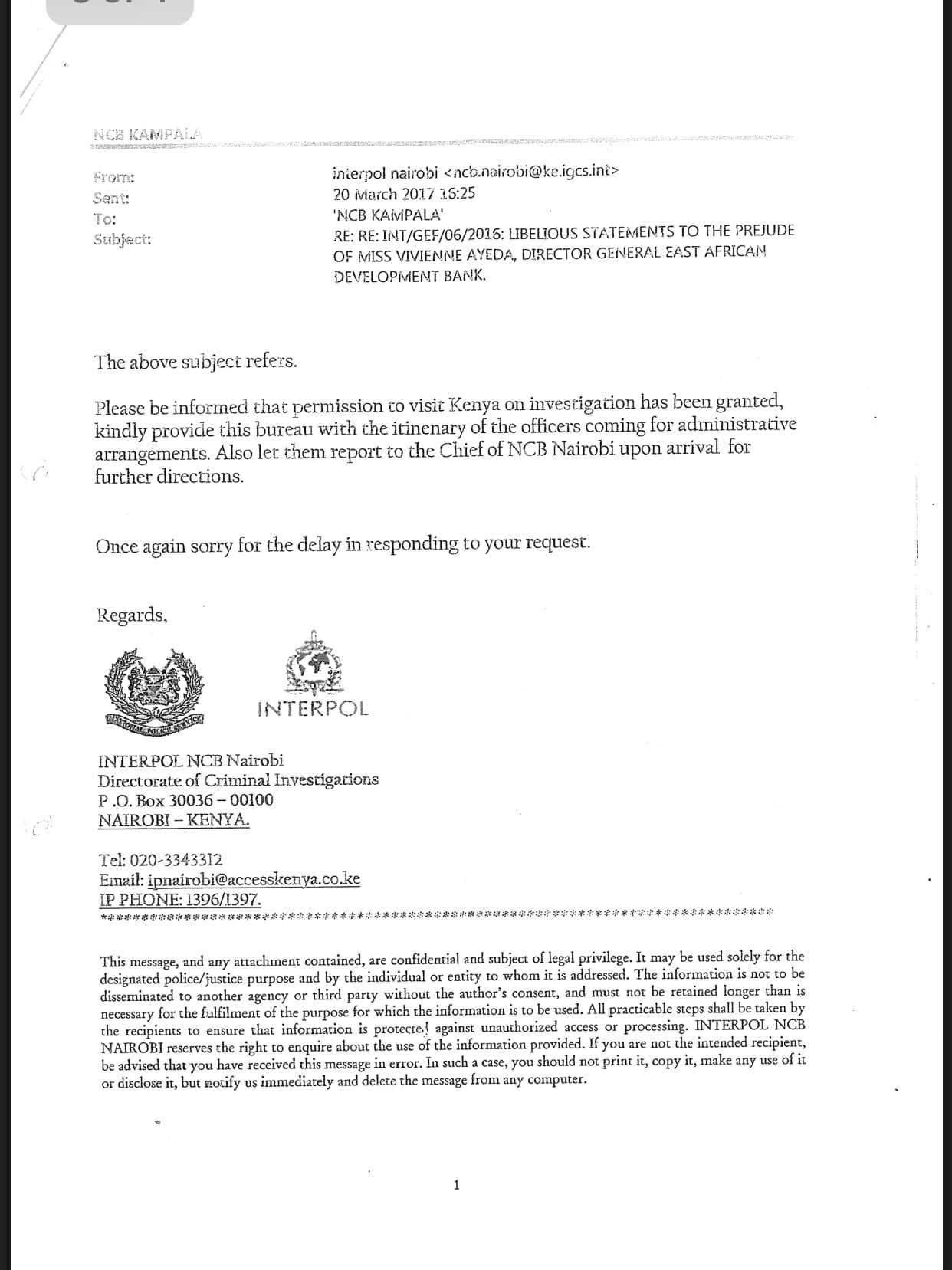 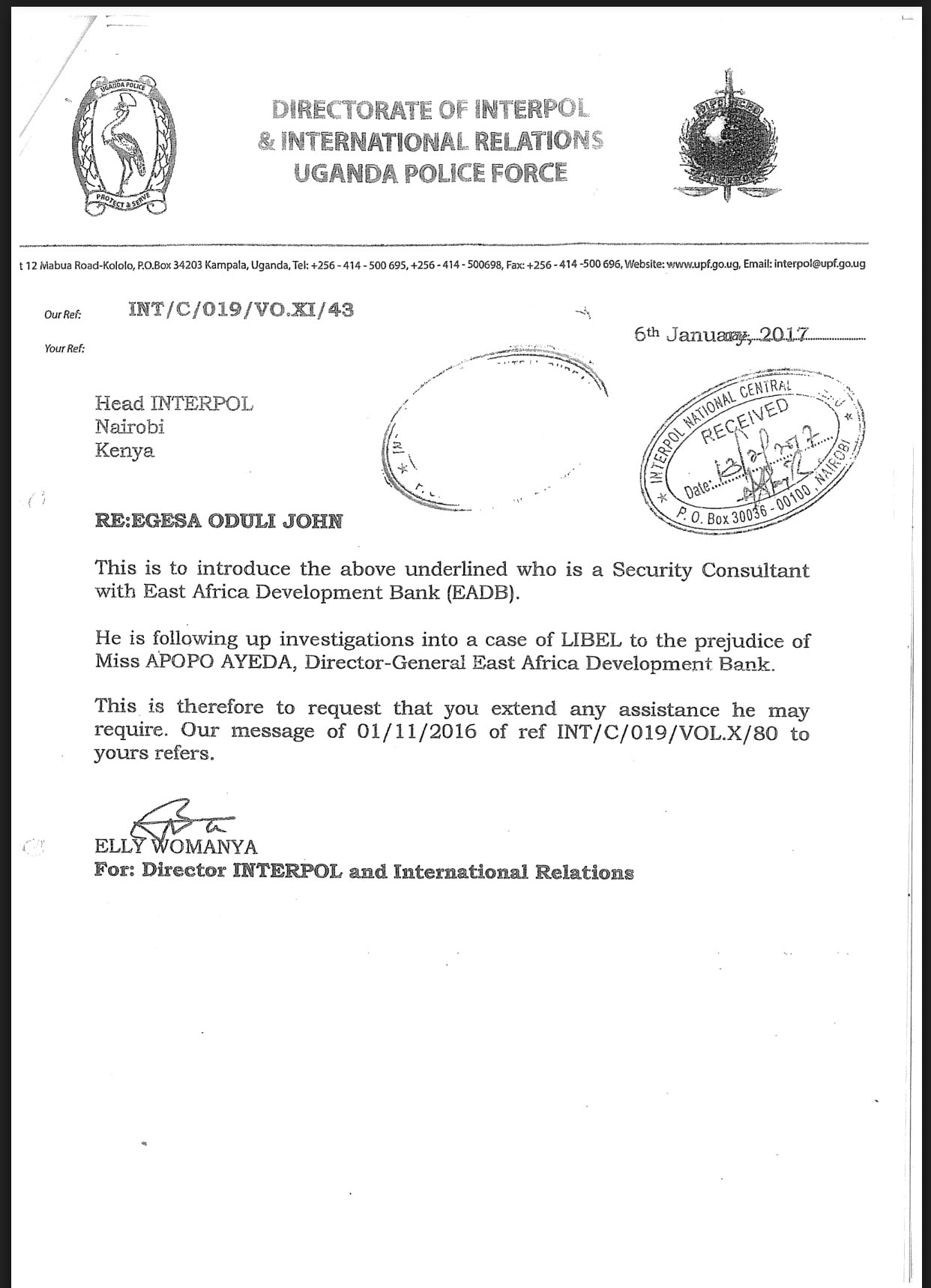 Below and attached we have summarized expenses which have been incurred by Vivienne trying to investigate the whistleblowers and preparing her own defense against the allegations. If Vivienne was innocent, she did not need to pay international lawyers to prepare her defense, hire several PR firms to fight publications of the corruption and abuse of office by Vivienne. in fact all these companies who have taken money from the Bank trying to protect Vivienne and the media houses which have worked with the PR firms to seek to hide these stories are accomplices to these corruption scandals. 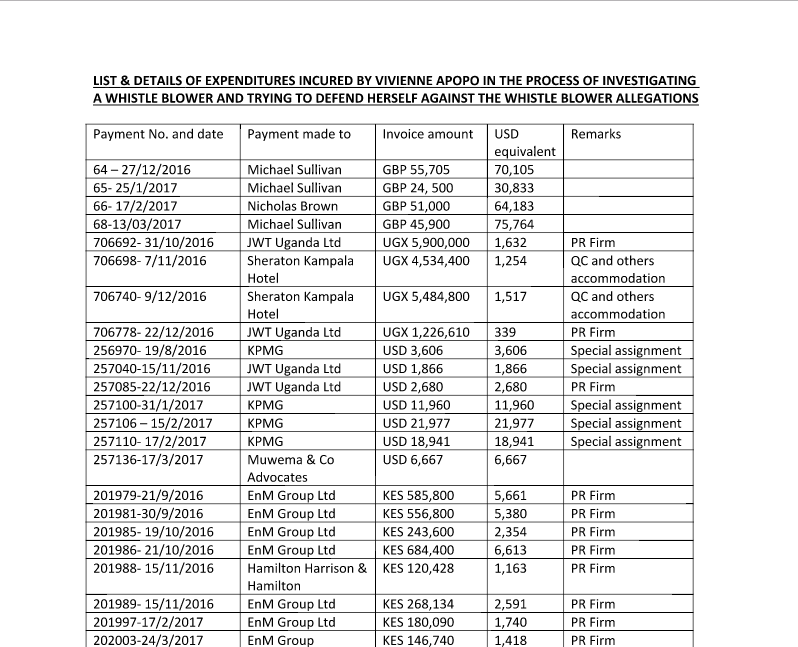 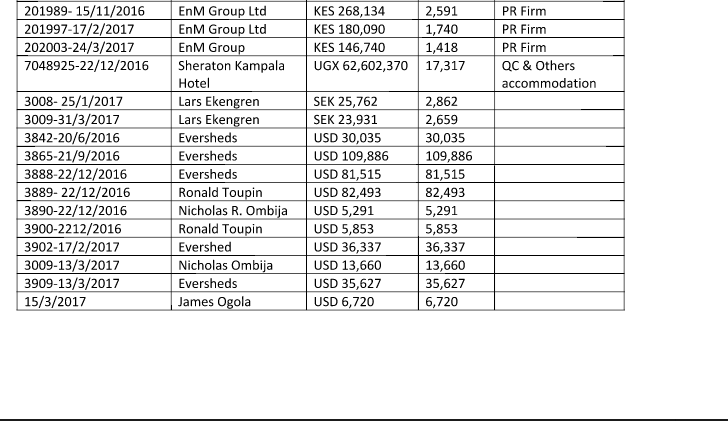 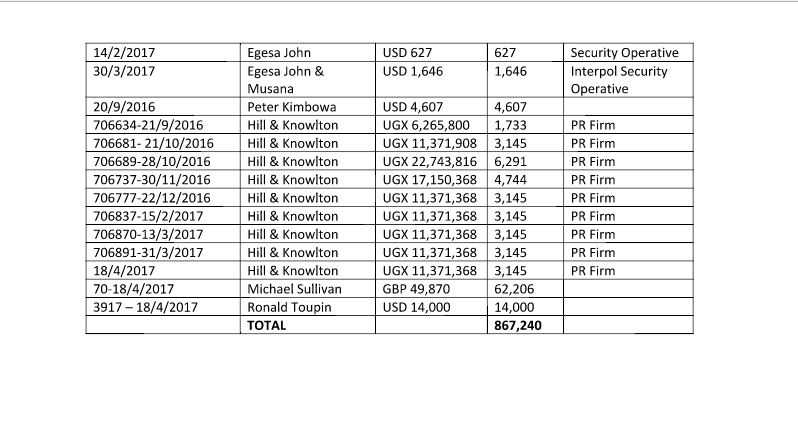 You commissioned E&Y Nigeria to carry out a forensic audit and the report with all the evidence confirming the allegations is in your office. If Vivienne dares to say the claims were false, let the forensic audit report be made public and then everyone will judge by that report. We have shared with you a sample of the evidence in our previous communications but all have been ignored. since July 2016 up-to-date, the Bank has lost USD 860,000 through costs incurred by Vivienne personally trying to defend herself, harass staff members and pay media houses and PR firms to hide the story. see attached list of expenditures which we would like Vivienne to refund to the Bank using
her personal money.