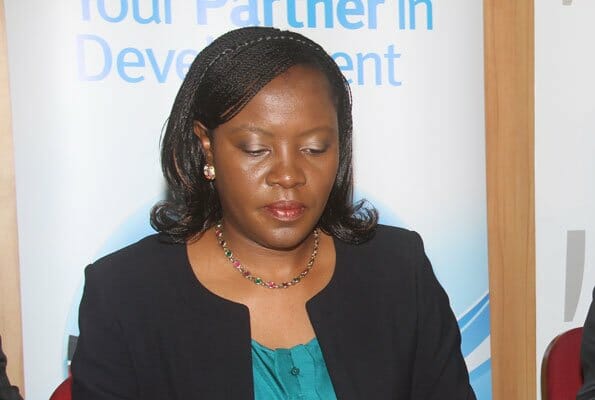 Caption: Crook EADB’s Vivienne Yeda Apopo who has been Looting the Regional Bank and being protected by Kamau Thuge the Moron at Kenya’s National Treasury.

According to the attached “Document P2” the E&Y Auditors were given information pertaining Vivienne’s unaccounted for travels abroad using Bank resources on personal and unclear travels.

The auditors scrutinized the information provided and sought to get details of trips as listed in Document P2 attached via an email dated 22nd November 2016. Proper documents did not support Those travels.

We are aware that Vivienne tried to forge accountabilities after that, but the truth remains that those travels were not initially supported and therefore Vivienne committed an offense. Why did those costs remain unaccounted for over four years; the implication is that she did not have plans to declare or account for those funds if it was not for the whistleblowers and the audit to bring them up.

In another email from E&Y dated 1st December 2016 attached as Document P3, the auditors requested to have supporting documents for funds she took from the Bank in 2010, 2011 and 2012 for a couple of travels to the EAC secretariat in Arusha.

Interesting about these journeys was that Vivienne was aware that the EAC secretariat was meeting the travel expenses and the EAC reimbursed costs incurred by Vivienne to travel to Arusha on these particular journeys.

Very interesting again is that Viviene went ahead to claim for perdiems from the Bank which was double payment since the EAC was reimbursing the costs. Even when Vivienne returned from these journeys, she did not refund the money she had picked from the Bank. Of course, after the auditor’s brought up these issues, she tried to forge accountabilities and went ahead to refund some USD 580 as confirmed in document P4 attached.

She used her office messenger called Daniel Sekibuule who banked the money on her behalf. Dan Sekibuule can be contacted on +256 759-999771 and will confirm that on the 13th Jan 2017 he was given money to bank on the EADB Stanbic bank account by Vivienne.

This is again evidence confirming that she had unlawfully taken bank money over four years ago and only decided to refund the money after the whistleblowers brought up this issue which was confirmed by E&Y auditors.

Up to now, and apart from the USD 580 refunded, no proper accountability has been provided for the other funds.

Away from misappropriation of bank money, The whistleblower reported that Vivienne was operating against bank policy and guidelines, Vivienne was herself the Management Committee of the Bank commonly referred to as MAC. This MAC was supposed to be comprised of Directors or Head of Units or the Senior Management team of the Bank.

However, Vivienne took all decisions by herself meant for MAC which was against bank policy and guidelines. The E&Y auditors indeed faulted Vivienne for not having in place a management committee (MAC).

In Vivienne’s crafty wisdom, she on the 7th February 2017 instructed one of the permanent consultants in the Bank called Sam Nyamwaya in an email attached here as Document P5, to review all bank policies and remove reference to the term “Management Committee – MAC” wherever it appears and replace it with the word “DG”. In this way, she is trying to
justify the mistakes she made by not having and working with the Management Committee.

We are aware some of the policies have been approved by the board while others have not been approved. However, these actions show you that you have been working with a person of no integrity at all and a crafty person. Sam Nyamwaya can be reached on +256 772 – 457075 to confirm these instructions.

Even a simple home is run by a wife and a husband who form the management committee of a home though once in a while kids can also be consulted. What about a regional financial institution. We protest this action (and all others) in the strong terms possible. We don’t know who the audience of the altered policies is intended to be, but we hope she is not bringing them to you for approval.

Indeed all these together with the other evidence we have provided in the past in conjunction with the evidence presented by the E&Y report prove that Vivienne cannot run this bank anymore and should be relieved of her services immediately.

Let us take a leaf from the recently concluded Shelter Afrique troubles. Similar or even worse things have been happening at EADB and continue to happen if Vivienne is not asked to resign. Staff harassment, overstatement and falsifying of profits, hiding of toxic loans in the name of illegal restructuring, taking bank money which remains unaccounted for many years, lying to the board, not following bank policies, etc. are among the reasons we say, Vivienne should be asked to resign honorably, all her benefits paid to her and she leaves the board to look for another capable and honest person to run the Bank.

We assure you that the EADB issues will never end unless Vivienne has left the Bank. Shelter Afrique board passed the test because they were able to resolve problems in a record time of about 2 to 3 months. EADB has been at it for eight months. A lot of money has been lost, a lot of bad publicity has been evoked, and many other bad things which would not have happened if the issue had been dealt with immediately.

We shall be frank with you that in whichever way you want
to deal with it, there is only one way to resolve the EADB issue
“Ask Vivienne to resign.”