Investigations into the procurement scandal and theft at Kemsa is now going for people close to power as the toothless EACC fumbles to uncover the rot.

The Ethics and Anti-Corruption Commission has summoned top operatives in the system as it moves with speed to beat the 21-day deadline issued by President Uhuru Kenyatta.

EACC  is to grill on Friday the vocal Jubilee vice chairman David Murathe who is also a key ally of President Kenyatta.

Detectives have established that Murathe is a bank signatory of Kilig Limited, though he dismissed any knowledge of the firm in Tv interviews.

Kilig Ltd was only registered on January 22 and was not among the pre-qualified firms at the Kemsa but was just hand-picked and awarded a Sh4 billion tender to supply 450,000 personal protective equipment, each at a cost of Sh9,000.

“The commission is investigating allegations of procurement irregularities in relation to the Covid-19 emergency supplies at Kemsa where Kilig Limited, a company you are a signatory to its bank account, is featured,” EACC CEO Twalib Mbarak said in a letter to Murathe.

Mbarak has revived the war on graft by targeting four governors and now top politicians allied to the president.

CN has also established that the wife to Meru governor Priscilla Murungi and their son will be interrogated on Monday.

Their firm, Caperina Enterprises Ltd, the firm was awarded a Sh45 million tender to supply surgical masks but the former Mp Rege, a bank signatory to Duke Agencies Ltd was to be grilled at Integrity Centre on Thursday. 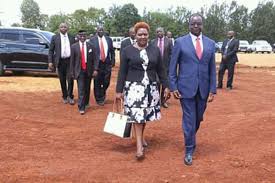 DPP Noordin Haji had also approved the arrest of Rege and six others over Sh2 million procurement of telemedicine equipment from the Karachuonyo CDF.

Rege, who ditched ODM for Jubilee and lost in the last election was selected to chair Kenya Electricity Transmission Company (Ketraco).

The questioning of Murathe is expected to trigger a political storm and loud reaction from the allies of Deputy President William Ruto.

Murathe has vowed to work very hard to ensure Ruto does not succeed Uhuru Kenyatta saying the DP has a hand in every mega scandal in government.

The official directors of Kilig Ltd are William Willbroad Gachoka, brother to Tony Gachoka who likes appearing on TV and a Chinese national, Zhu Jinping.

Murathe has admitted that Gachoka is his longtime friend and business partner but denied having worked with him in Kemsa deal.

“We do a lot of consultancy services. We have consulted for various international companies. We are setting up a lot of businesses in the free and special economic zones and we also consult for construction companies in the country,” Murathe said during an interview with Citizen TV.