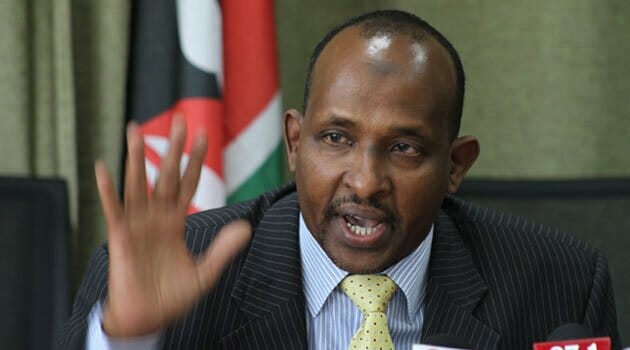 National Assembly Majority leader Aden Duale is now calling for embattled Public Accounts Committee chairman Ababu Namwamba to resign since his leadership has been called into question.
Duale insisted that Namwamba should hang up his boots as his colleagues had clearly lost confidence in him owing to the alleged bribery reports.

“When 13 members of your committee tell you that we do not have confidence in your leadership, that tells you better resign,” he said.

“The PAC is not an ordinary committee, it is the most powerful in terms of vote of no confidence but I am sure Parliament will discuss that because that is a very serious matter not only for the committee but the leadership of Parliament and I am sure it is going to be a matter of discussion next week.”

The Majority leader further rooted for Abbas Mohammed who is the Ijara legislator, stating that he was fit for the job.

The Leader of Majority then took a swipe at the opposition for claiming to fight graft yet they had not initiated any action on the Budalangi legislator who doubles up as the party’s’ Secretary General.

“The opposition has been accusing the Government of corruption today the Secretary General of a political Party, the chairman of PAC is facing serious integrity issues,” he stated.

Duale emphasised that the accusations against Namwamba needed to be substantiated and acted upon to uphold the dignity of the House.

There are reports that another petition calling for the removal of Namwamba is in the pipeline and already the 13 who voted in support of the motion have been meeting to plot a way of ousting the embattled legislator.

On Thursday, 13 members of PAC voted in favour of a motion to expel Ababu Namwamba after reports that he has on several occasions been bribed to alter reports on people and institutions they were probing.

Namwamba has however refuted those claims instead terming it a political witch-hunt by those who want to tarnish his name and image.