The vehicle which was driving on the wrong side of the road caused a slight accident; by scratching a car belonging to a Waithera Gaitho. 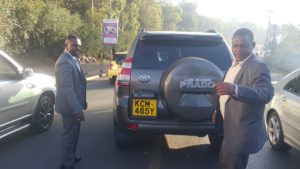 CAPTION: The vehicle belonging to the office of the DPP that caused an accident this morning

I've been hit by these"very important" people while they were driving on the wrong side. Please help me find them. pic.twitter.com/LL5VcpvJlj

Immediately after she posted, the DPP through their twitter handle, @ODDP_KE respondent promising stern action against the drivers.

The matter has been brought to the attention of the DPP. The motor vehicle belongs to the @ODPP_KE and the DPP has directed that immediate action be taken by @NPSOfficial_KE against the driver involved. The public shall be informed of the progress of the case. https://t.co/P8tBFdyFbl