According to the State, MP Gachagua is alleged to have looted State agencies including Nyeri County Government through his link with Deputy President Ruto.

In the last 7 years, Mathira MP Rigathi Gachagua received slightly above kshs5.6B from state agencies! That is an average of ksh800m per year, ksh66m per month and ksh2.2m per day ! There is no better definition of theft than this! KENYA has enough for all of us !

The three accounts are registered under two companies, Wamunyoro Investment and Technical Supplies and Services Limited, both owned by DP Ruto’s ally.

Gachagua is being investigated over claims of using his companies and close associates to collude with officials from Nyeri county and the state department of Irrigation to receive money suspected to be proceeds of crime.

“There are reasonable grounds to believe that the accounts are/were used as conduits of money laundering contrary to sections three, four, and seven and section 16 of Proceeds of Crime and Anti-Money Laundering Act, ” said lawyer Stephen Githinji.

“An order compelling the manager, Rafiki Microfinance Bank Ltd, office head branch to nominate authorized persons to make and give Sergeant Fredrick Musyoki, a police officer and investigator attached to the Assets Recovery Agency, a certificate of production of electronic evidence or by electronic device that shall be given in compliance with the court order,” the court ordered the Bank.

The agency will also investigate cash deposits and withdrawals, including cash transfers, within the same period.

On his defense, Gachagua while reacting to the order by the court said that he is being targeted for supporting DP Ruto’s 2022 presidential ambitions.

Gachagua is a dynasty, a multi- millionaire who served as District Officer in Molo, Nakuru in 1992 during the fierce tribal clashes that saw Kikuyus and Kisiis suffer at the hands of local militia group. 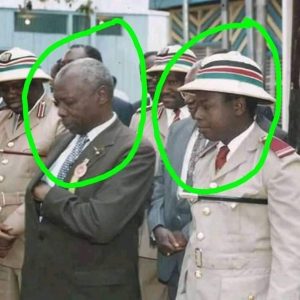 This was the same year Moi and Ruto are alleged to have organized ethnic cleansing as the then President Moi sought to win the first Multi-Party general election.

Later he( Gachagua) was Uhuru’s PA.

He is the same Member of Parliament behind the draconian Cybercrime Act that is being used State mafia to shred whistleblowers, social media users, independent journalists…

Nothing like tough choices here all are birds of a feather.