Deputy President William Ruto has hit out at the DCI detectives for bullying some senators over their stand on the disputed revenue formula.

DCI detectives made dramatic arrests of three senators leading to a political storm in the floor of the Senate where some senators accused the executive of trying to circumvent the will of the people exercising their mandate through leaders they elected.

On Monday, senators blamed state functionaries for being behind the arrests of their colleagues who hold divergent views on the disputed revenue formula.

Contingents of DCI detectives pitched camp at the home of Kakamega Senator Cleophas Malala in Kitengela where he was later arrested and driven to Kakamega to face charges of ‘flouting covid-19 rules’.

DP Ruto on Tuesday posted on twitter that “The abuse of police and criminal justice to bully citizens, threaten and intimidate leaders and now blackmail senate is wrong.The bipartisan Senate Committee to build win-win consensus is great wisdom and leadership. The abuse of police is wrong..very wrong. It’s not the reason millions woke up early to vote for us,” he tweeted.

The country’s second in command posted minutes after the Opposition Chief Raila Odinga to newsrooms over the same. 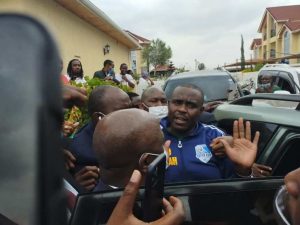 Kakamega Senator Cleophas Malala after he was released in Kakamega. [p/courtesy]

Odinga accused the state of pulling back the gains made by the new constitution on the path to democratization by referring to the state as the warlords.

“The warlords need to stop beating the drums of war or financing the divisive rhetoric and our legislators involved in this matter need to search their souls in all honesty and put public good above private gain,” Odinga said.

Senators linked the arrest of their colleagues on their stand on the contentious formula for sharing revenue allocation for the 47 counties that has hit a snag, for a record nine times.

The arrests that remain under unclears circumstances forced the senate to suspend their special sittings on Monday morning.

All the three senators who have since been released are aligned to a group dubbed ‘Team Kenya’ which brings together marginalised and less populated countries who claim to be standing with the ordinary Kenyans.