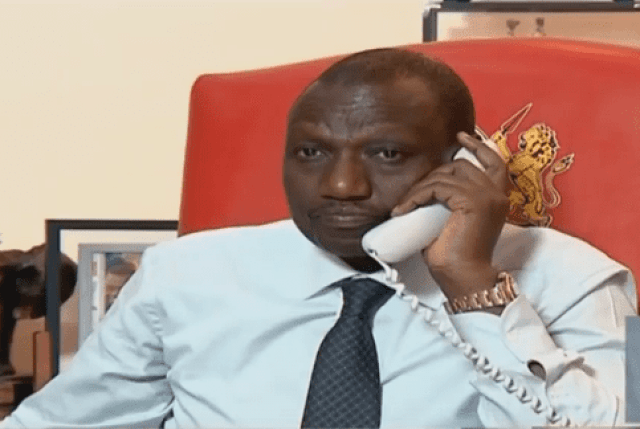 FILE photo of Deputy President William Ruto making a phonecall inside his Harambee Annex office: Detectives from the Directorate of Criminal Investigations (DCI) spent the better part of Monday reviewing CCTV footage and interviewing his staff and security personnel office, the scene of crime for a mega scandal involving a fake military tender in which foreigners were swindled Ksh. 11.5 million

Deputy President William Ruto has summoned his Harambee House Annex staff to a crisis meeting at his Karen residence as pressure continues to mount him with loud calls for resignation over the Ksh. 39.5 billion scandal.

This rather unexpected meeting comes at a time when sleuths from George Kinoti’s agency combed at his office for the second day running in a bid to fish out evidence related to the multi-billion scam.

According to a report published on the People Daily this Wednesday, Mr. Ruto will meet the staff to discuss the issue that has proven troublesome in his political career.

Fresh information relating to the case has now emerged; with revelations indicating hithat suspects may have met at the Jubilee Deputy Party Leader’s office on Monday, January 20, just three weeks before they were nabbed.

The main suspect in the fraud case, Rashid Echesa – a former Sports CS who confessed to a parliamentary vetting committee that he is a Class 7 dropout – was arrested alongside his co-accused Daniel Otieno, Kennedy Mboya, and Clifford Okoth on Thursday, February 13.

The suspects spent were arraigned in court on Monday, February 17, and charged with 12 counts relating to fraud.

The charges ranged from conspiracy to commit a felony to attempting to obtain Ksh. 39.5 billion from a foreign businessman by pretending they would award him a tender to supply military equipment.

They were released on Ksh. 1 million cash bail each.

Ruto had earlier distanced himself from the military tender scam saying the corruption case was a distraction by his political competitors.