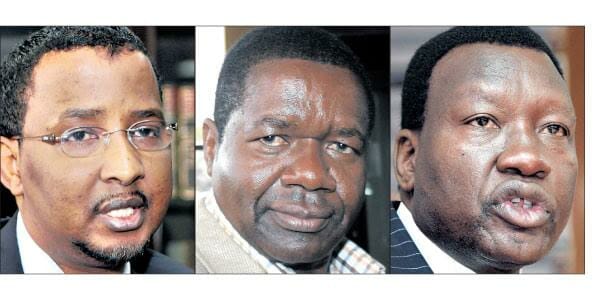 Caption: Three dangerous crooks who deserve nothing short of the death penalty.

Can the Independent Electoral & Boundaries Commission (IEBC) be trusted to conduct free and fair elections in Kenya again? Of course not. We saw the open rigging in Kericho and delays in Malindi by-elections. IEBC is run by thieves who all need to be in jail.

A UK court recently accused the Kenyan government of dragging its feet in convicting Kenyans involved in the Chickengate scandal despite British liaison efforts.

The London court fined printing firm Smith & Ouzman Ltd £2.2 million (Sh350 million) for bribing Kenyan state officers. The EACC has made little headway in local investigations and no one has been charged over the matter to date, almost a year after the UK company directors were charged.

“The Crown have indicated that they have tried to liaise with the respective governments [Kenya and Mauritius] to identify a means by which compensation may be paid it being their policy whenever practical to seek compensation,” the ruling reads.

“However, they are not positively pursuing compensation in this case.”

Judge Andrew Mitchell said there has never been a formal request from Kenya for compensation and he is unsure the affected states have taken any steps to recover the looted cash from their own officials.

Worth noting is that Independent Electoral and Boundaries Commission (IEBC) Chairman Ahmed Isaak Hassan is still in office, despite being adversely mentioned in the Chicken Gate scam. Former registrar of the High Court Gladys “Boss” Shollei is still walking scot free, while James Oswago is still living large. Davis Chirchir is a diehard associate of Deputy President William Ruto while Trevy Oyombra recently acquired an Audi Q7 using bribes from this chicken scandal deal, technically showing the world that they have the Ethics & Anti Corruption Commission (EACC) and the Director of Public Prosecutions Keriako Tobiko in their pockets.

documents show that the Kenyan taxpayer paid dearly for the illicit dealings between senior Smith & Ouzman (S&O) officials and the senior managers and commissioners in the defunct Interim Independent Electoral Commission (IIEC), putting to shame Kenyan prosecutors and the anti-corruption agency officials who have yet to nail anyone for the offences.

For many of the printing contracts, costs were inflated by up to 38 per cent mainly to cater for the kickbacks — commonly referred to in the mails as ‘chicken’ — to senior election officials, the UK prosecutors say.

The prosecutors say “the corrupt payments were built into S&O’s pricing of the printed materials so that the inflation in the price as a result of that corruption was passed onto those funding the institutions that contracted with S&O.”

Click HERE to download the Prosecutor’s evidence leading to the indictment of the Smith & Ouzman company, yet EACC officials have been bribed to play a cat & mouse game together with Keriako Tobiko.

Check the embedded Evidence down here

Also find below some e’xposes about the IEBC . When did the fish start rotting ?

CONFIDENTIAL : THE FACADE THAT IS THE IEBC by Cyprian Nyakundi