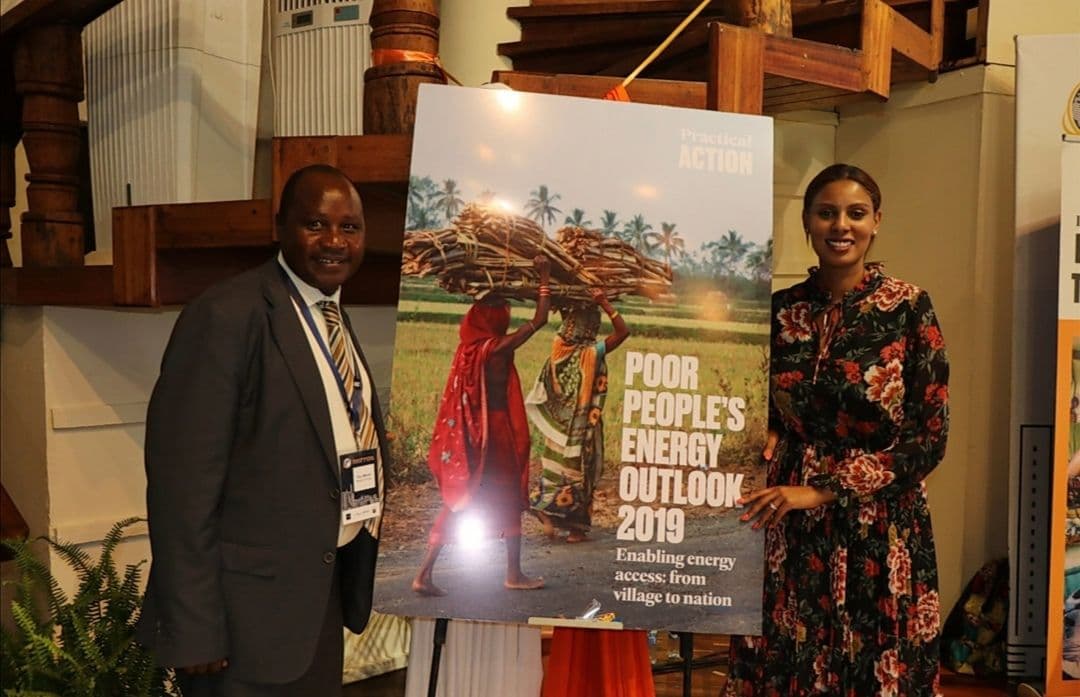 Whistle Blowing of Corruption at Practical Action International has not yielded action. Nothing has been done by management despite the fact that donor funding from IKEA Foundation, and DFID is being stolen by Farida Bulhan Aliwa, the regional director at Practical Action in Kenya.

Similar to Oxfam International (which covered sexual abuse against communities by senior staff in Haiti and DRC, the management of Practical Action has banded together in silence to cover up this corrupt regional director in Kenya, because she is their powerful ally.

Farida and her husband Ben Aliwa met at Save the Children International where they were both married and started an illicit affair that destroyed their spouses. Ben was the direct supervisor to Farida, he promoted her unprocedurally to senior manager child protection because of this sexual affair and many staff complained about this until he was removed as her supervisor and they had to declare the relationship.

Farida and her husband Ben Aliwa have been abusing their positions.

Internal complaints at Path International led to the sacking of Ben Aliwa (country director) who was forced to resign by the management for hiring his brother-law – James Mokua Soki, who is the husband to Farida’s sister, Khalida Bulhan Soki, a doctor who works at Nairobi Hospital.

Practical Action International has however covered the abuse of office nepotism intimidation by Farida.  in turn Farida employed her sister in law Linda Aliwa (Ben Aliwa’s sister) at Practical Action.

The management launched a sham investigation in October that has since been buried. They fired a senior manager at the Rwanda office who raised similar fraud and abuse of office against the Rwanda country manager who’s is an ally of Farida.

Farida operates by corrupting staff or threatening them. She has unprocedurally sacked staff who have questioned her impunity. She sacked the finance manager in 2019 and fired two program officers through a sham safeguarding investigation in September 2020. Those who keep quiet are rewarded with unprocedural promotions.

Those who conspire with her are;

Farida Aliwa and her husband ben aliwa has abused their respective powerful positions in path international and practical action. They have gone against policies of ensuring proper stewardship of resources and the public and private support.

They further  use their personal interest and failed to maintain the highest business ethics nor have they complied with the letter and spirit of Kenya, United Kingdom  and United States law.

Ben has a conflict of interest by employing his brother in law, Mr. James Soki Mokua. Mr. Soki is married to Khalida Bulhan Soki, who is the sister to Farida Bulhan Aliwa. Farida Aliwa is the wife of Ben Aliwa. See attached the evidence of these relationships and the public links:

Ben Aliwa and Farida Bulhan Aliwa have been abusing their power as Vice president of Path and regional director of Practical Action. Their joint financial and other interests compromise objective judgment and fulfillment of professional duties.

Farida has continued to abuse her power and office in Practical Action. 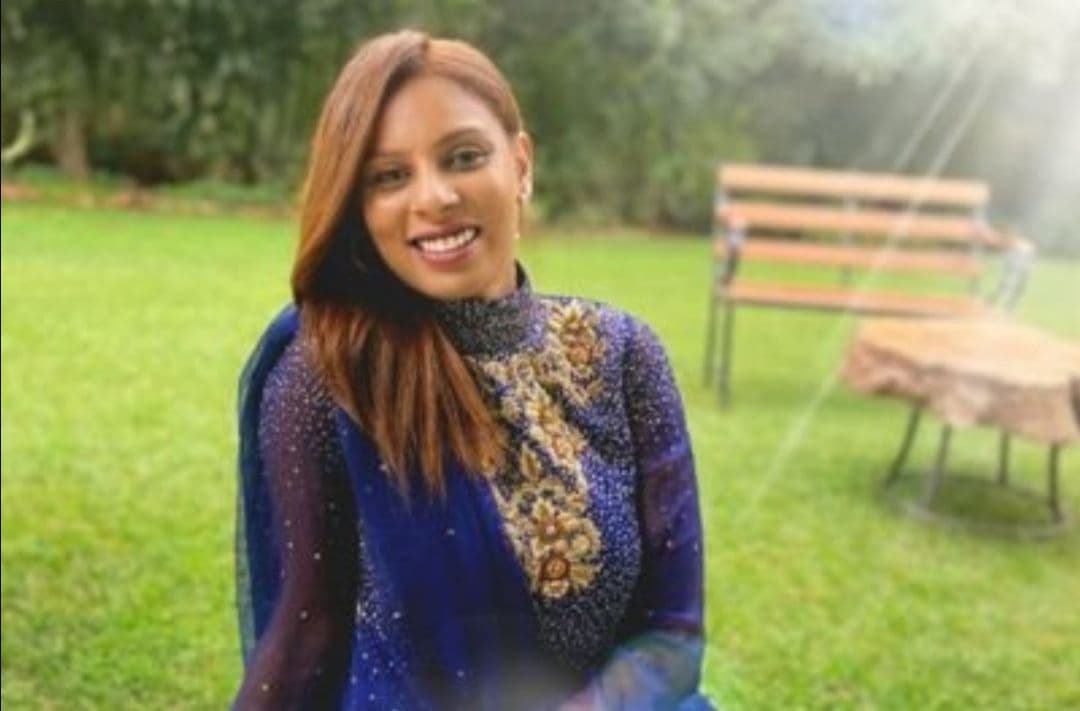 She operates with impunity. Since Ben Aliwa hired Farida’s brother-in-law in Path International, Farida has hired two of her husband relatives in the Practical Action Kisumu office. They are Linda Aliwa, a project assistant and George Omulo a driver. This two staffs have used their direct relation to Farida to commit fraud in a donor funded project treyl.

Linda has been stealing money by faking participant numbers, phone details and signatures. George has been colluding with the procurement manager Gerald to steal project money by faking mileage, single sourcing one taxi company for the Kisumu office, amongst other procurement thefts that are under investigation. These two staff operate with so much impunity in the office because they have made it known that they are related & hence thy are close to power and everyone is afraid of losing their jobs by speaking up against Farida.

Farida has continued the abuse of office by irregularly promoting the HR Coordinator Noel Sikasa to head of people and culture which she was not qualified for as she has no Human resource experience or education and skipped the next line of promotion which was a manager post. In return for these favours, Noel was personally in charge of hiring Linda Aliwa and George Omullo knowing they are relatives and she helped to cover this up. In return Farida has allowed Noel to hire her relatives Josephine Osengo the communications assistant & Douglas Busolo the M&E officer.

She also hired her brother in-law as a project mentor in the WEEK project. Josephine is the sister-in-law to Noel. She was hired without any competitive recruitment by Noel. Busolo was hired irregularly to cover a maternity role, and later he was irregularly absorbed under the cover of COVID-19 in May 2020 when there was a hiring freeze. The Kisumu office is a mess because of all this impunity by Noel and Farida.

Farida has also abuse her office by irregularly promoting the procumbent officer Gerald to head of procurement and so he behaves with so much impunity. He is not qualified does not know proper procurement process or policies. He also steals donor money by giving his known associate procurement contracts that have jeopardies the civil works of donor projects in Kisumu. He frustrates Kisumu staff by insisting to procure everything from Nairobi, hence causing delays simply because he wants to steal money through his preferred contractors. 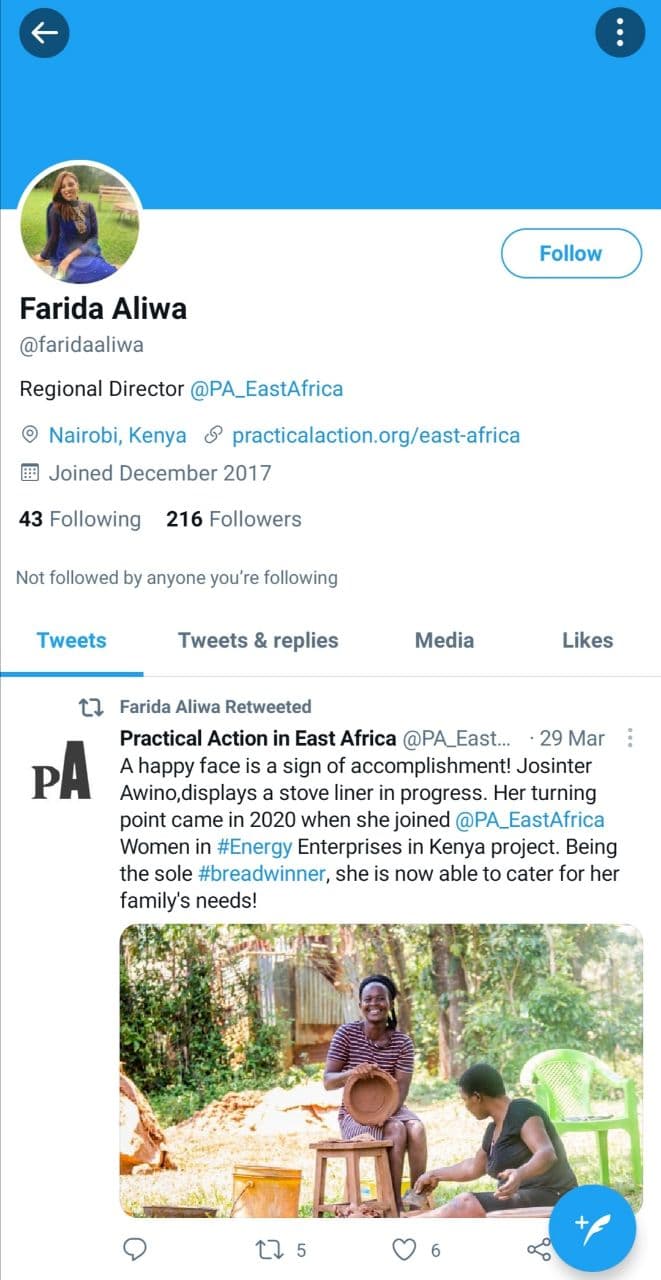 He is the only one who comes up with and approves prequalified suppliers’ no one else knows this list and he always brings his friends to supply goods and services who are not even prequalified.

He is the only procurement staff. As he knows he is close to power, the procumbent department of an international organsation is a one-man show. In return, he helps Farida to falsifying mileage claims of the official office car which Farida uses for personal use against the donor and office rules and later claims money from office.

This theft and abuse by Gerald is overseen by Farida, who also steals office money through false vehicle claims. She has been going to personal Kisumu trips and personal holiday trips with the official car and using it on weekends. To the point, she spoilt the office car in December 2019. She had an accident with office car July/August which was covered by Gerald. Her husband regular drives the offices car and they regularly make private visits to their village in western region in the car pretending its official work to Kisumu office. When in Kisumu, she is also driven by George Omullo the relative of her husband, using project cars, yet she went with the office car

On 22nd November, 2020, another corrupt senior staff was reported to the management and their silence continues.

Further account of abuse of power, impunity and corrutption by farida aliwa.

Farida operate by corrupting staff or threatening them. She has unprocedurally sacked staff who have questioned her impunity. Those who keep quiet are rewarded with unprocedural promotions.

Jechonia kitala has been allowed by Farida to hire his cronies and associates as consultants.  A common consultant who is always hired by Jechonia is Gladys Kitavi to carry out energy consultancies and she has no energy background, experience or qualification. Gladys and Jechoniah have a personal relationship. There is no competitive and open sourcing of all Practical Action Kenya consultants by Kitala and Farida, so that their friends and personal associate can get consulting contrast.

Farida allows Jechonia to do this because she has corrupted him so that he cannot question her or her decisions when she is behaving with impunity by hiring her relatives and stealing money through false mileage claims. She has hired her in-laws, Linda Aliwa, George and Geoffrey. Geoffrey was hired without any proper recruitment and has been telling everyone that he was given the highest salary than drivers who have served the organization for 10 or 20 years because he is close to power.

In December 2018 Farida hired a student of her personal friend from Canada, to be an intern in Kenya office, yet many educated applicants have been turned away.

It is a give and take corrupt office. 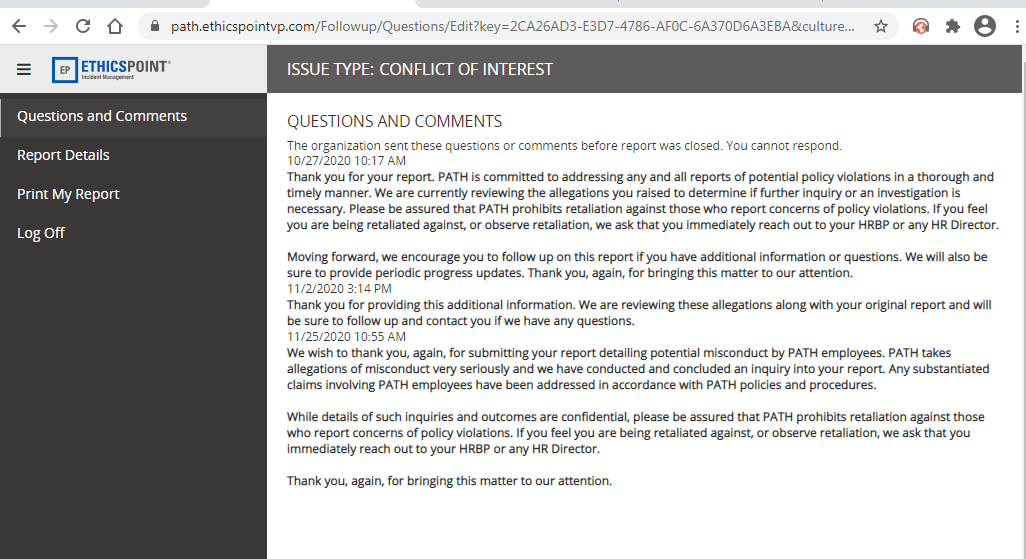 After Jeconiah hires his friends, Noel prepares the contracts without questioning the recruitment process because Farida has also allowed her to hire her relatives as staff and mentors. Noel was also allowed to hire Janet as a human resources officer, in a shoddy recruitment, yet they were already friends and classmates at the university where they are both doing the same master degree. Janet has also hired her sister as a mentor in the donor projects

Farida oversees the same corruption in the procurement of goods perpetuated by Gerald. then Farida signs all these shoddy HR and procurement and consulting contracts without question because they’ll are in an agreement to each defraud the donor funding as per their departments. Farida has been allowed to continue with this impunity because she is powerful unchecked.

It is a give and take corrupt family defrauding donors.

How does the board in the two organizations plead?