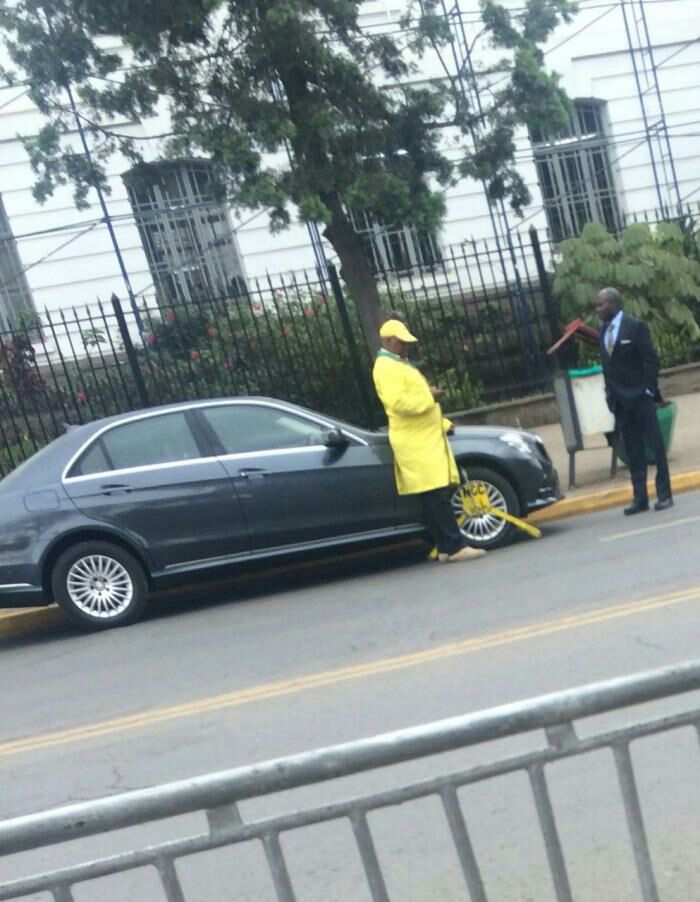 The flashy, big-talking lawyer who thinks promoting consumerism impresses everyone, is in the news again; this time being caught on the wrong side of the law. Kipkorir’s vehicle was clamped by Nairobi County askari’s, meaning he had to part with a fine to have it un-clamped. Seems like he doesn’t have a driver, contrary to the big-talk balderdash he posts on social-media, because one would expect he’s organised on every front. 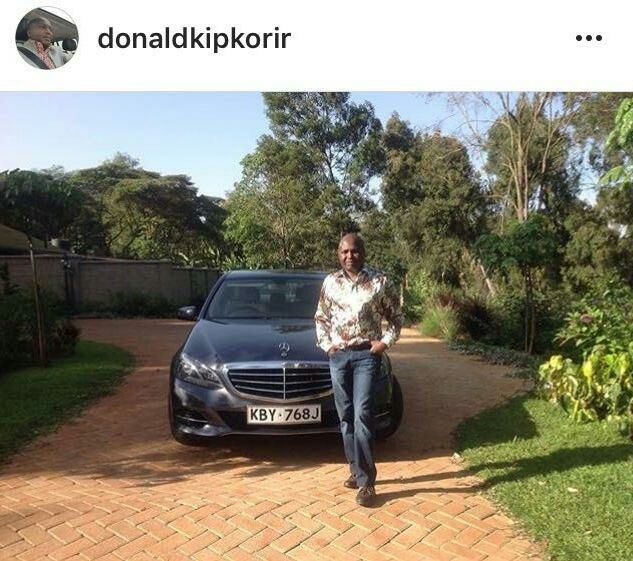 CAPTION: Photo of Donald Kipkorir next to his Benzo that was clamped today in Nairobbery.

Donald Kipkorir who continues to use his Facebook page as a medium to brag about material possessions instead of promoting the values of humanity, hard-work, intellect and calling for the scrapping of 8-4-4, recently made himself a target after posting a photo of his new Range Rover with customized plates.

Kipkorir got so infuriated with my article that he blocked me on Twitter, which left me surprised that a man who represents people for a living, can be hurt with sticks and stones 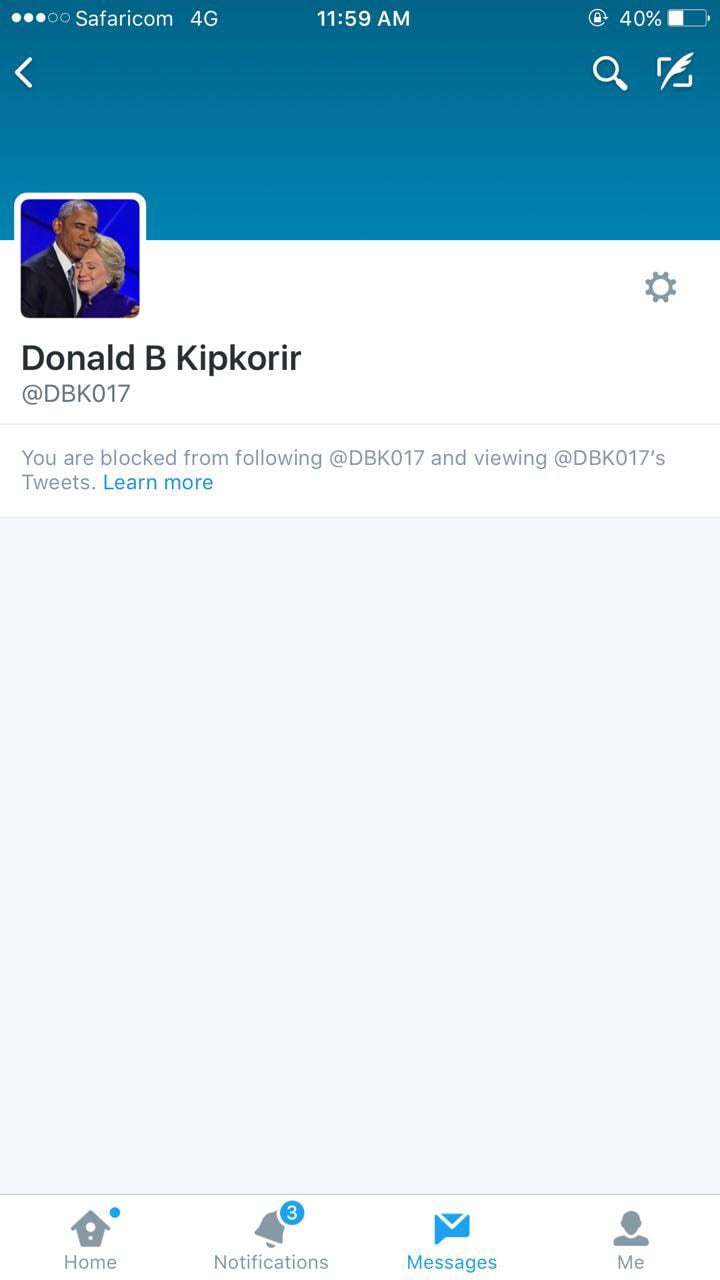 Caption: Screenshot showing Donald Kipkorir blocking me on Twitter. Such a sensitive “girl.”

Kenya has an emerging scourge of “sensitivity” where individuals block those who confront them with truth and facts. The noisy folks who are forever flooding our TimeLines with garbage or talking from a moral high-ground, cannot accept criticism in equal measure.

If you want to be given the respect, or have the street-credibility that you desire, then be ready to post what you can defend. When challenged with facts, don’t resort to blocking as a means of escapism. Be a man. Stand-up for yourself. Don’t seek validation from ass-kissers who don’t have analytical minds.

For instance, the sexually-frustrated feminist Betty Waitherero is a perennial blocker of those she deems as critics. It’s not our fault that we see through your bullshit Ms. Waitherero. If you’re truly a defender of truth and facts, then be ready to face your critics with confidence and flair. Not hiding in the periphery, blocking them. 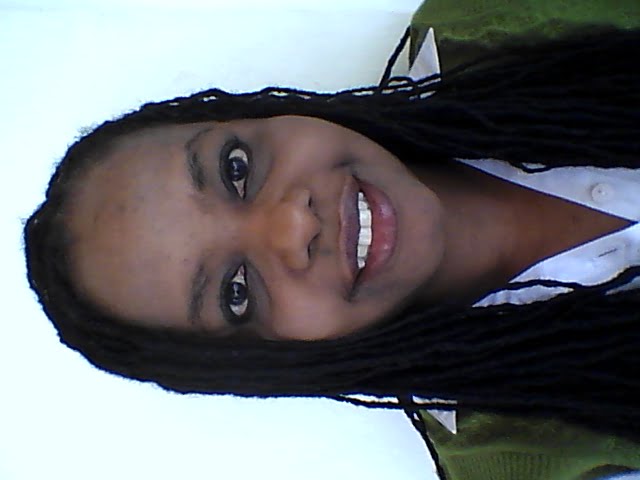 Caption : Frustrated Feminist Betty Waitherero who many people say she is always on heat 24/7.

For instance, Vera Sidika and Huddah Monroe must be the most criticised Kenyans on social-media, due to their career choice of being socialites and hoe’s. They never block anyone. They’re clear in their minds what they’re after meaning that no amount of critic will derail them from their objective.

But the characters like Betty Waitherero want to masquerade as one thing, yet we can see through their tweets. We can tell their desperation to acquire wealth, we can tell their bitterness at being born in the wrong families and greed to ascend the social ladder of Nairobi. But they still want to act like they’re part of “The People” as activists.

It’s just like Ory Okolloh. She blocks us because we saw through her constant rants against Government as not being honest/genuine. She only wanted to be given a position by Uhuru himself, whom she genuinely admires. She also wants to be part of the St. Mary’s clique, the latter-day elites of Kenya, and she believes that she deserves it due to her Harvard degree.

To those who block others, we see through your bullshit. And we will start exposing you one by one.

Tomorrow, mainstream media journalists from Kenya’s leading “advertorial” Business Daily have been bribed by Donald Kipkorir to do yet another feature promoting his flamboyance and big-talk.

It’s the reason why we call on all mainstream media journalists to use their heads for once. When you promote Donald Kipkorir who in-turn promotes consumerism and is the custodian of the hoe-culture in Nairobi, what are you trying to achieve?

Do you think it’s moral for someone to brag when a vast majority of Kenyans cannot have three square meals in a day? Is it fair to display opulence in the midst of economic hardships precipitated by the mediocre Jubilee Government led by thieves and pathological liars?

Who gains when mainstream media bastards promote someone like Donald Kipkorir? Is it meant to inspire, or ridicule those not as lucky like him, to be in a position to steal public funds? 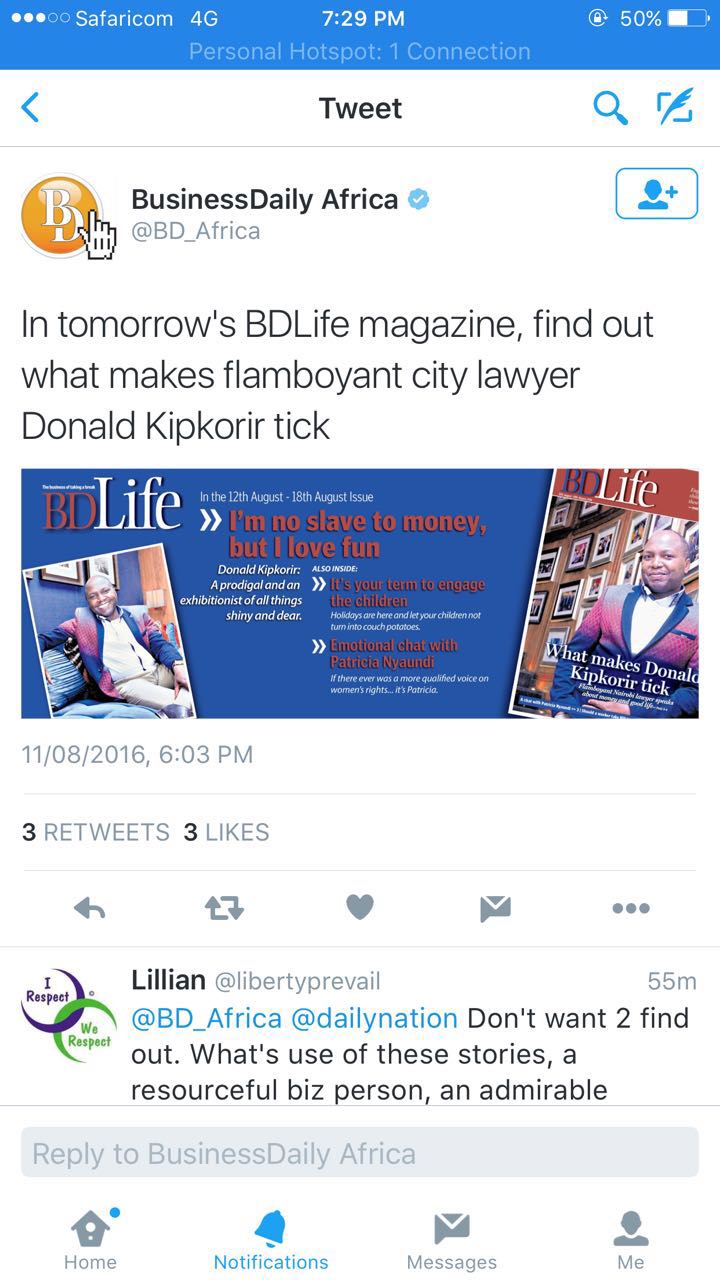 CAPTION: Business Daily Life Magazine editor and writers have been bribed to promote the flamboyance of Donald Kipkorir. We propose that the everyone working in that magazine be sacked.