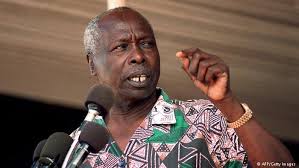 Retired president Daniel Moi still remains the master of political chessboard in Kenya. To many analysts, he is a force to reckon with in so far as Uhuruto administration is concerned. Ever since the government felt the political heat in the recent past, Moi and Nicholas Biwot were invited to State House to “consult and strategise”.
Hardly a week had elapsed than the presidency shifting its base from Nairobi to the Western region of the country at the Eldoret State Lodge in particular where they camped for some days in an attempt to be back the electorate from being influenced to defect to opposition. Cord leader Raila Odinga had previously been busy receiving them in Marakwet. He had also come from the Kipsigis country where he declared that he had no hand in “fixing” DP William Ruto on ICC case.
In a rare visit to State House, retired President Moi could have used his position as the mentor of Uhuru Kenyatta to advise him on the way forward. Sources say that Uhuru could have made some “political blunders” where it was observed by Moi, the self-acclaimed professor of Kenyan politics that something that may have left Uhuru with egg on his face could likely be in the offing.
Moi, however, is known to be a strong critic of Raila ever since the mention of his name coup attempt. The Raila-led opposition as was seen by Moi was regaining ground across Rift Valley, a stronghold of Jubilee and something that irked the former president to seek an opportunity to advise the youthful head of state.
Coincidentally, several issues were shaking the “firm government” of Uhuru Kenyatta. Among them is the weakening education sector – from teachers strike to leaked examinations. The Sh1.4 million Okoa Kenya signatures to IBEC to begin the referendum process, corruption which has permeated every sector of the economy. The frequent attack on the government by opposition and other forces like the NGO world in the name of civil societies with their foreign donor agencies on human right issues especially on war on graft has been a jibe to the Jubilee regime.
However, Uhuru administration in the time of need, Moi came in handy and he is understood to have advised Uhuru accordingly to adopt the art of “safe” foe landing in for is nascent Jubilee regime from a more experienced African statesman of his calibre. It was the moment to raise strategies and not just hope while in Nairobi. Uhuru, no sooner did he wake up and heeded Moi. One of such wise advices, it is claimed, was to visit the grassroots and address issues and challenges facing his administration across board.
Uhuru, it is said, is a good listener. It is also said that Moi told him to visit all regions whether opposition stronghold or Jubilee zone, but take his own initiative and address to the public – the only way out to popularity come the 2017 elections.
Moi, however, sources say told Uhuru on the face to face the next election which must be won as it were was a daunting task ahead of him. The former president is the happiest of all when he saw the people he groomed in the saddle of power and among them is Uhuru and his sons. Interestingly, another retired president, Mwai Kibaki gave a piece of advice to Uhuruto administration to learn to be accommodative by avoiding confrontational politics that can divide the nation further.
Analysts are for the opinion that Uhuru could have realised that some of his men were misadvising or even misleading him. These, observers, say that Uhuru had gone to the level of commenting on matters that are pending in court. They say these men have sidelined the Attorney General from doing his duty. This, however, has rendered the president make decisions that may not be helpful to the nation.
However, critics are saying that Uhuru did more of politicking than addressing the real issues and challenges facing the people at the ground. Farmers are still complaining that the president never talked about their plight – prices of their products: maize, tea, and milk in particular that are still wanting. Sources say that Uhuru’s calendar through busy, indicate that he is yet to revisit the region.
As for Uhuru’s actions in Western and North Rift, he has drawn a roadmap to the effect that power is safe in his hands. “Divide and rule” policy could be observed when the president invited Knut officials to State House while isolating Wilson Sossion, the Knut secretary general. Nevertheless, African presidents should treat their citizens well while in power as that they will retire in peace.
After all, Jubilee administration has Kanu as one of key party associates.