The bitter war between Homa Bay county finance minister Nicholas Koriko and county secretary Isaiah Ogwe is all out, messy and nasty.

Their beef heightened after a mysterious death of a local contractor was blamed on their war.

But Governor Cyprian Awiti has remained silent and unconcerned as members of his kitchen cabinet continue to engage in nasty fights.

The two officers in plum positions were good friends until Governor Awiti’s succession politics got serious. They are all thinking of succeeding Awiti whose leadership has been marred with massive looting of public funds.

The contractor who was ‘killed’ had been subjected to a series of frustrations after he fell out with Ogwe.

But things worsened when the deceased identified as Opany Deklan publicly showcased his allegiance to Koriko.

Since then Opany began battling procurement technicalities that were laid by Ogwe to frustrate his payments, as a revenge.

The delayed payments kept the deceased at odds with lending banks and his employees. 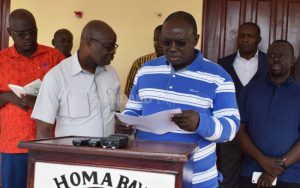 The day he passed, he had received a payment voucher of a paltry Sh2 million out of some Sh20 million he was expecting from the Homa Bay county government.

That was a shocking let down, when Opany rushed to the bank to process the Sh2 million voucher, he discovered that he had been duped.

The voucher was a dummy meaning his account still had nothing. He developed high blood pressure instantly and died hours later.

Opany died a frustrated man who could not even fuel his car, he resorted to bodabodas to dodge auctioneers and other debtors.

But Koriko who describes the deceased as his friend said Opany’s death has no political hand.

“Yes it’s true that Opany is dead but all those theories surrounding his death are just the work of rumour-mongers,” he said.

Koriko and Ogwe landed the lucrative positions courtesy of the the corrupt governor of Homa Bay, Mr. Cyprian Awiti.

But Ogwe is acting overzealous, powerful and with authority to stamp over all the departments under the watch of the governor.

He is a shot caller in many dockets including the finance that is headed by his rival, Nicholas Koriko. 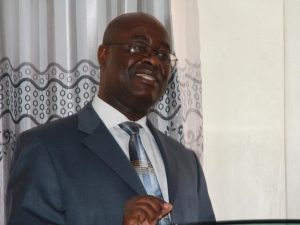 The autocrat has also planted his men in all the 11 departments with full time snitches around Koriko.

His own sycophants describe him as a phony man that a lazy governor like Awiti can not control.

Ogwe has also pocketed chief officers, directors, accountants and auditors on top of gifting his friends and relatives with appointments across the 11 departments.

But Koriko has crafted a working scheme that has seen the corrupt Ogwe sidelined key opinion leaders in Homa Bay County.

Ogwe has been sidelined by notable figures from his Kanyada village including veteran politician Jerry Ndong.

Koriko is telling the voters that Mr. Ogwe is an outsider who has his roots in Ngiya, Siaya county.

But Koriko’s men who are in Ogwe’s payroll have warned him against challenging the county secretary’s political moves.