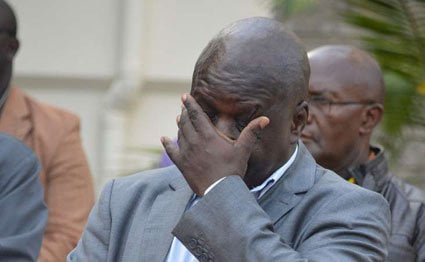 There is a storm brewing at the Vihiga County government after the governor, whom we recently exposed interdicted his county secretary over serious fraud that the governor himself is suspected to have participated in.

The corrupt governor has since ordered the allegedly corrupt county secretary to hand over the position to the chief officer Mr. Philip Gavuna.

The governor has accused Mr. Francis Ominde of failing to justify the use of Ksh. 7.39 million which was embezzled during a bonding session that was used to loot the taxpayers’ coffers. The MCAs have become notorious with some of them demanding to be flown abroad to enjoy as Kenyans suffer.

Mr Ominde, who confirmed receiving the letter has accused the governor of trying to fix him and vowed not to leave office because the governor is engaging in an illegality. He confirmed the meeting took place in Nairobi earlier this year.

“You have failed to account for the Sh7.4 million which was given to you on March 27, 2018 to cater for an interactive meeting between the county assembly and the executive,” The letter reads in part.

Dr. Otchilo has further accused Mr Ominde of contravening the Public Finance Management act which has become useless as people loot with no action from the accountability agencies like ODPP, EACC and DCI.

“This is in contravention of Public Finance Management Act, 2012, regulation 93(5). I hereby request the County Public Service Board to constitute a committee to investigate the allegations and submit its findings no later than six months from the date of this letter.” Dr. Otchilo says.

Additionally, the governor has linked his county secretary to various scandals ranging from dishonesty, irregular appointments, showing the middle finger to the toothless EACC and deliberately failing to manage the corrupt county’s information.

This is not the first time the county secretary and his governor are differing. In August this year, he sacked the secretary through a press conference.

The county secretary is in office after he sought redress from the court. This is after he was again, in writing, fired. The main cause of all these issues has been leaking of information as alleged by the governor.