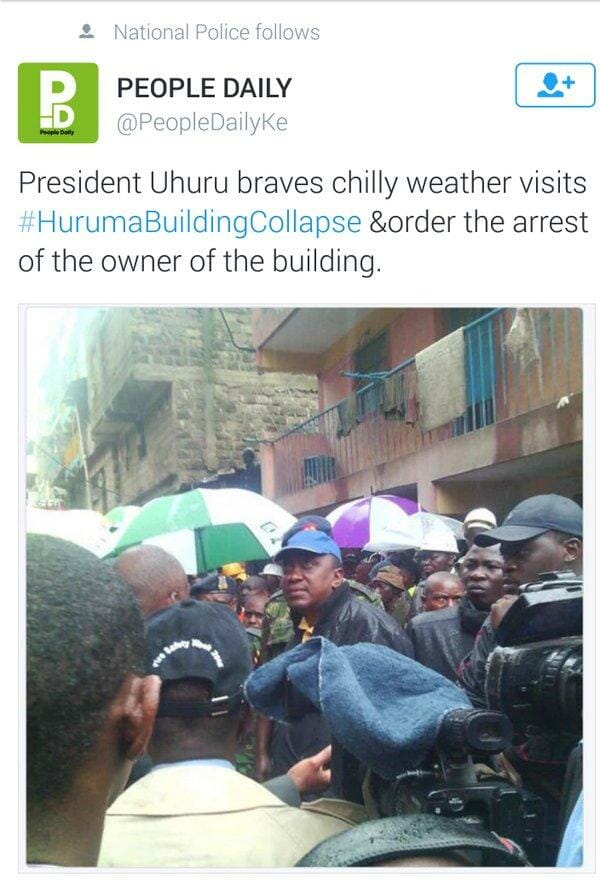 It is disgusting when the President of a country decides to milk some publicity from a purely man-made calamity that has struck his countrymen. It shows the lows at which Kenya is governed with, and the desperation for individuals to identify with the trending topic of the day.

We helplessly watched as President Uhuru Kenyatta and his Deputy portrayed themselves using bribed mainstream media as the main victims of the 2008 post-election violence in Kenya. They went around the country stoking ethnic sentiment disguised as “prayer meetings” to solicit cheap sympathy for their own tunnel-visioned gain.

Today, bribed mainstream media journalists framed his PR visit to the death-stricken Huruma neighbourhood as such. They used the term “braved chilly weather” as if the victims who have nowhere to sleep and lost their property and lives didn’t have to bear the brunt also.

The adolescent journalists in Kenya seem to imagine that everyone in this country has an inferior IQ like they do, and even if the majority who tune into vernacular stations and mainstream media have a low IQ, there still exists the uber-intelligent critical mass that calls Twitter their home. This intellectual crowd tells it as it is, and are able to communicate fluently in 140 characters or less, unlike the Facebook audience that needs to be elaborated on with layers and layers of paragraphs and symbolism. This is the reason why mediocre characters like Mugo wa Wairimu and Moses Kuria thrive on Facebook and not Twitter.

Today’s publicity-stunt by President Uhuru, yet he has overseen the rot and corruption in Kenya which has allowed such unplanned settlements to rise is a slap on the face to Kenyans who know how incompetent and oblivious to the plight of poor Kenyans he is.

We still insist that because of dancing on the graves of those killed during the post-election violence by pretending to be the victim, because of pretending to mourn with the Huruma victims yet we know he couldn’t wait to exit that crappy neighbourhood with no roads or functioning drainage systems, we believe God is saving the best for last to Uhuru Kenyatta.