Kenya and Somalia have had a dispute over a 100,000 square kilometres of sea area for a long time. The disputed area that lies in the Indian Ocean, is believed to contain large deposits of oil and gas.

In August 2014, Somalia filed a case against Kenya at International Court of Justice (ICJ). Somalia accused Kenya of infringing into its territory by awarding a couple of foreign firms to prospect for oil and gas in the disputed area. At ICJ, Kenya lost the bid to stop the case from going to full hearing, despite arguing that the two East African nations had signed a Memorandum of Understanding (MoU) in 2009 that bound the them in an agreement to work with the United Nations Commission on the Limits of the Continental Shelf (UNCLCS), the UN agency charged with settling border disputes.

The Somalia parliament rejected that MOU and sought recourse at the ICJ.

Kenya, which was represented by former Attorney General Prof. Githu Muigai, had argued that it has stood with Somalia during its difficult time after the fall of government in 1991, by harbouring refugees and working for peace in Somalia.

Kenya had also insisted that her boundary with Somalia is along a parallel of latitude, in its eastern border, as was decreed in the presidential proclamation of 1979. Somalia on the other hand, wants the court to demarcate the boundary to determine the exact geographical coordinates as an extension of its southeastern land borders. 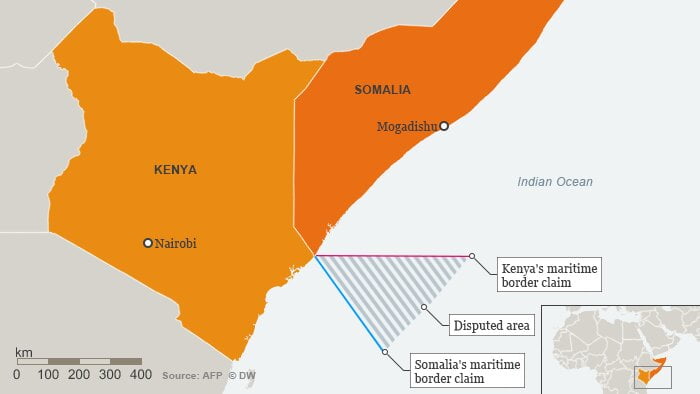 Kenya efforts to stop the case from going to full hearing hit a dead end; Kenya was supposed to file a substantive response to the main case in December 2017. As of 2018, ICJ had authorized the submission of a reply by Somalia and a rejoinder of by Kenya and fixed the time limits for the filing of these written pleading to June 2018 and December 2018 respectively.

The case is still at the ICJ and the decision of the court will be final and will have to be accepted by the two counties.

However, yesterday, Kenya accused Somalia of auctioning the oil blocks in the disputed border area. This action precipitated a diplomatic row where Kenya recalled her ambassador and expelled Somalia’s.