Speaker of the Nairobi County Assembly yesterday tendered her resignation to President Uhuru Kenyatta after a series of chaotic scenes at the City Hall.

Elachi was the first female speaker but she became a victim of endless Jubilee Party leadership wrangles in the assembly. She the got embroiled between supremacy battles between Governor Mike Sonko and Nairobi Metropolitan Services under Maj-Gen Mohamed Badi.

Amidst all the wrangles, a secret meeting held two weeks ago chaired by President Uhuru Kenyatta discussed and sealed Elachi’s fate. The meeting was also attended by some  41 MCAs, who were planning herouster.

The state was not angered chaos witnessed at the chambers last month where a female MCA, Patricia Mutheu Musyimi representing Mulango Kubwa ward was brutally abused by police.

A decision had to be made to restore order. A reliable source told CN that the president will deal with anyone troubling the NMS including Governor Mike Sonko.

The chaos that erupted at Assembly on July 28 when the officers blocked MCAs who had gone to the assembly to serve Elachi with notice of motion of impeachment.

Some officers deployed at the City Hall were also reluctant to act and what followed next was a mini reshuffle of police officers.

Elachi was accused of ruling the assembly with an iron fist, she fell out with the majority of Jubilee MCAs and a few Minority members but found solace in the support from the rest of the MCAs.

Her leadership style coupled with political theatrics to survive leading to emergence of two camps, with one side being pro-Elachi/NMS and the other against her.

When Elachi made a comeback last october, she thanked Governor Sonko for his support but the two suddenly fell off after Sonko who is also facing corruption charges was barred from accessing his office.

Sonko later transferred some functions to NMS, an entity he has now fallen out with over lucrative tenders at the City Hall. 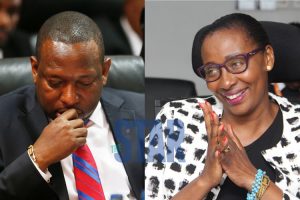 Her shocking resignation was to save herself from a possible impeachment or she was coerced to resign and save the image of the assembly.She accused Sonko of being behind her tribulations as she tendered her resignation to President Kenyatta.”I humbly tender my resignation to President Uhuru Kenyatta. For the last few days, there have been life-threatening incidents. I appoint my deputy speaker, John Kamangu, as acting speaker.”

Her resignation is raising legal questions because it is not clear whether she forwarded her letter to the assembly clerk or not. She had fallen out with the assembly clerk Jacob Ngwele and her appointee Edward Gichana was suspended by the court. Ngwele was also suspended awaiting hearing and determination of his case.

According to Standing Orders 5 (d), resignation of the speaker is by way of a letter addressed to the clerk and conveyed to the assembly by the chairperson of committees.

Governor Sonko celebrated Elahi’s resignation and attributed it to the hand of God. She was Sonko’s ally turned opponent who further fell out with senior officials from the party.

After her resignation, Jubilee Party National Chairman Nelson Dzuya summoned eight Nairobi MCAs including 4 nominated to appear before its disciplinary committee on August 13, 10:00 a.m without failure.

Dzuya accused the MCAs of conducting themselves in standards that contravenes the Party and it’s constitution.

“You have been accused of Acting contrary to the pledge you made and signed for in 2017, the committee shall grant you audience on this date to hear your side of the story,” reads part of the letter.

Nairobi County Assembly is currently on recess but will have to appoint a new speaker when they resume because majority of the members wanted Elachi and her deputy out.